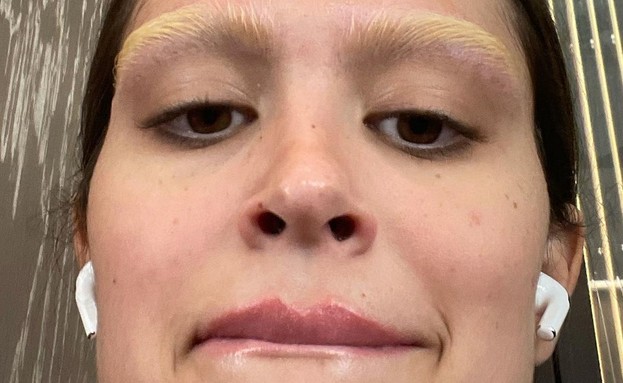 When 20.year.old Amelia Hamlin was 19, she started dating the redest light bulb in Hollywood – Scott Disick. Sweet Amelia fell in love with a father of three to the top of his head, and it was clear to all of us that the end of the strange love story was a battle. This is exactly why when the two broke up a moment after Scott blacked out the mythical ex – Courtney Kardashian, no one was really surprised – but we were not ready for her new post.breakup haircut.

The beautiful star is making a dent in the fashion weeks that have been taking place all over the world in the last month, as she walks the most coveted runways and bombs the most chic blocks there are. For those of you who do not know, we are told that when it comes to fashion, there is no such thing as no such thing, and the beautiful Amelia decided to go all out – and oxidize her eyebrows to the yellowest yellow we have ever seen.

The star shared on her Instagram page a series of photos of the oxidation process and the end result, and garnered millions of likes within hours. The beautiful Amelia launched the new look while she was in Paris during Fashion Week, and although it took us a while – we actually started to like (and even considered adopting) the new look.

Amelia Hamlin and Scott Disick broke up earlier this month, after Scott sent another ex to Courtney Kardashian a critical message about the hot pictures of the mother of his children and her new partner. A few days later it became known that Scott and Amelia were on break, which in an instant became an official parting that we fully support. Good luck to everyone.