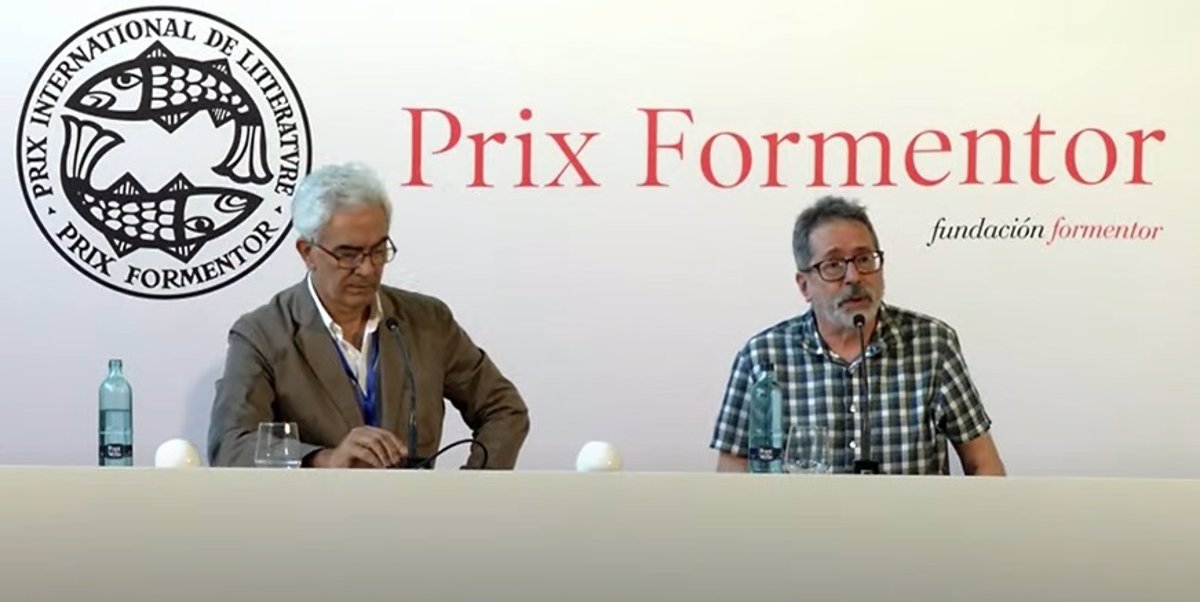 “Enough of the prizes, I have had enough. The Nobel will never be given to me”, affirms the Argentine writer

The Argentine writer César Aira, winner of the Prix Formentor 2021, has offered a press conference in Seville, where the award ceremony will take place this afternoon. “I gladly assume the qualification of rare and I would even like to be extremely rare,” he assured the media present, accompanied by the director of the Formentor Foundation, Basilio Baltasar.

“They have told me that I am a rare writer. If a writer is not rare, it is because he is conventional like all the others and the artistic is out of the ordinary so I gladly assume the qualification of rare and I would even like to be very rare”, has affirmed Aira (Coronel Pringes, 1949) on the occasion of his stay in Seville, which this year hosts the delivery of the Prix Formentor as well as the Literary Conversations, which will take place on October 10 and 11, at the Hotel Barceló Sevilla Renacimiento.

In this meeting with the media, the author has recognized that his literary career “arose from friendship.” “I became a writer as a boy with my friend Arturo Carrera; we divided the fields: I left poetry to him, I stayed with the story,” he recalled.

Aira has indicated that his life was marked by “defective education”, to which he will also refer to his speech this afternoon. “I had the bad idea of ​​educating myself, I was ill prepared to face the world. I was lucky to be able to preserve my ivory tower, my family, my children, except for a brief period that I spent in jail, it was all a fairy tale” , has related.

In fact, when asked about his stay in prison, he pointed out that it was because of “a peccadillo of youth, political things.” “Those 70s dragged one to do things that one later regretted and ended up being apolitical. In fact, politics is Chicano, ill will and insults,” he lamented.

Aira has also addressed his relationship with readers and has ensured that he tries to be “as less demanding as possible” with them. “I write as clearly as possible, I don’t like those things that Vargas Llosa did to go from one time to another with flashes of the past mixed with the present. I like to tell a story from beginning to end, with as much clarity as possible. I once modestly compared myself to Salvador Dalí in the sense that, having such a baroque imagination, such an unbridled invention, I need a simple prose. The baroque style of invention and execution could give an inedible mixture “, It has been recognized.

Regarding his creative process, he has detailed that “everything goes together”. “I am incapable of thinking: if I think of a story, I just need an idea as schematic as possible and, from there, it comes out. If I get stuck and don’t know how to continue, I have learned that if I interrupt writing and start thinking about it, I can’t think of anything and if I keep writing, it comes out. The writing itself is helping me, “he explained.

In this sense, he has claimed not to have “that sensual taste for words that poets have.” “My thing is rather the images, a visual imagination, I see the stories that occur to me. A crystalline, simple, transparent prose, without baroque displays: at least it is the lesson that I learned”, he pointed out.

In addition, Aira has argued that “he would continue to write even if there was not a single reader left in the world” and he has analyzed the differences between writing and reading. “The good thing about reading is to provoke a satisfied smile when you find something well done,” he assured.

“The pleasure of reading is porous and superficial, while in writing the pleasure is dense, one writes each word, no one skips any, it is not like reading: even if you read with the greatest pleasure, you skip. They are the two great ones. pleasures of my life: reading and writing and I see the difference between the two. The authentic thing of the writer is to write, it is obvious but it is like that, “he added.

For all this, it has been defined “rather neoclassical, rather than baroque.” “Both writing and reading are solitary activities, reading in a group is something that I never liked. Even the cinema: I am a cinephile, I discovered that what I really like is watching the cinema at home, alone, in front of my computer, like reading a book. I am not attracted to the social aspect of any art, “he acknowledged.

“I AM AGAINST CAMPAIGNS TO PROMOTE READING”

Returning to literature, he has pointed out that “it was always a minority activity of few people”. “I am against campaigns to promote reading, let it remain optional: let anyone who wants to read read. I have always found it absurd that the State promotes reading: you need people who work, not lock themselves in his house to read. I am satisfied that there are few people reading “, has influenced.

Asked about his favorite authors, he alluded to Borges (“as they said, a light went out but he is still very present”) and to Manuel Puig, “the last writer I followed book by book.” “I expected all his novels,” he acknowledged, with special mention of ‘Tropical night falls’.

Regarding the obtaining of the Prix Formentor, Aira has recognized that “this is going to be the last prize”. “I already promised myself, it’s not that I dislike it, on the contrary, it’s a pleasure, an honor, but that’s it, I’m leaving the place for a young man to enjoy it more than me. Enough of the awards, I’ve had enough, this is consecrating, “he added.

Along the same lines, he has predicted that he will “never” receive the Nobel Prize for Literature. “They will never give me the Nobel: those prizes have to be justified and the justification is not literary. There has never been an award for how good the books are, but for the defense that was made of this or that” , he has argued.

The Formentor Prize, endowed with 50,000 euros and supported by the patronage of the Barceló and Buadas families, is a recognition of the quality and integrity of the authors whose work consolidates the prestige and influence of great literature. It was awarded for the first time in 1961 and promoted by a renowned group of European publishers such as Carlos Barral, Gallimard, Einaudi or Rowolth.

After these first ten years of the second period of the award (recovered in 2011) it has been awarded to Carlos Fuentes, Juan Goytisolo, Javier Marías, Enrique Vila.Matas, Ricardo Piglia, Roberto Calasso, Alberto Manguel, Mircea Cartarescu, Annie Ernaux and Cees Nooteboom. As of this year 2021, the award regains its itinerancy and title, Prix Formentor.

This year’s winner, César Aira, has published more than a hundred novels, whether fiction, essay or theater, which have been translated into numerous languages ​​since 1981, when his first novel, ‘Ema, la cautiva’ appeared. One of his most notable works is ‘How I became a nun’ (1993). He has performed translation and other editorial duties. He has won the 2014 Roger Caillois Prize and the 2016 Manuel Rojas Ibero.American Narrative Prize, among other distinctions, and was named Chevalier dans l’Ordre des Arts et Lettres by the French government.

The award ceremony precedes the Literary Conversations that, since 2008, have brought together writers, editors, critics and the public. This year they will take place on October 10 and 11 at the Hotel Barceló Sevilla Renacimiento with the motto ‘Shipwrecked, pilgrims and argonauts’, as detailed by the Formentor Foundation, created in 2020 to organize the Formentor Prize for Literature and Literary Conversations.

The Conversations will be attended by Pilar del Río, Philippe Claudel, Lidia Jorge, Raquel Taranilla, Moisés Mori or Jean.François Fogel. In turn, the organizers have announced that one of the novelties of this edition is the program dedicated to the centenary of José Saramago. This year, the Honor Committee of the Formentor Foundation opens at the same time.