The multiform art of Saul Steinberg, with ‘drawn calligraphy’ pays homage to Milan 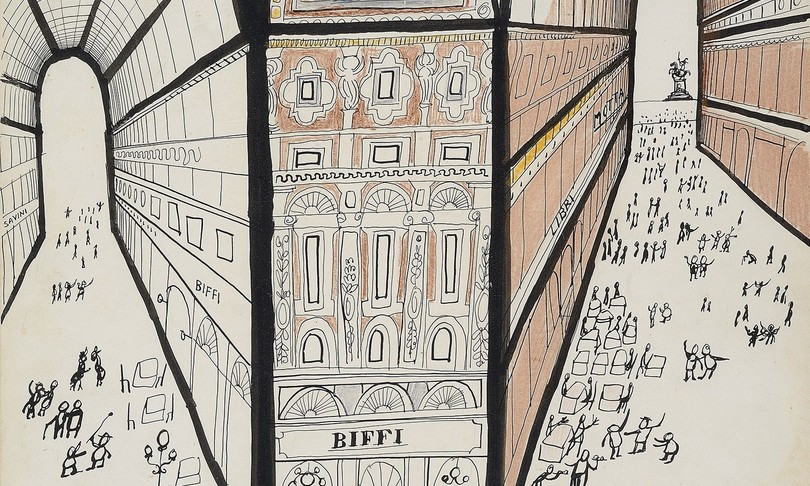 One image writer, a designer of philosophical plots, a painter who lets himself be read, a creator of visual aphorisms. These are some of the definitions used to describe Saul Steinberg (1944.1911). We do not know where to place him, his art is vast, intense and multifaceted.

At the Triennale of Milan, from 15 October to 13 March, there is the “monumental” exhibition created with Elect, dedicated to his genius ‘Saul Steinberg Milan.New York’ by Italo Lupi and Marco Belpoliti with Francesca Pellicciari.

A tribute that Milan owed to the great artist, who dedicated many of his works to the city where he studied.

I am 350 works on display, from foundations and museums around the world. Of these 89 will remain in Milan at the Braidense Library, received as a donation from the Steinberg Foundation of NY. Pencil, ink, pastel drawings, masks drawn on paper to wear to “hide” behind “a reassuring smile”. But also satirical magazines in the thirties like the Bertoldo, then his direct testimony from the front of the world conflict. There is also a lot of Italy, especially his beloved Milan, and a lot of New York in his works, starting from famous covers of “The New Yorker”.

This is what his “political world” had explained in an interview: “through what I do at the New Yorker I formulate a subversive political message“.

His life was obstacles: a Jew born in Romania, because of anti.Semitism he moved to Milan, where he studied at the Royal Polytechnic. Then expelled from the country for racial reasons, he managed to reach the United States, where he enlisted in the army, to tell the story of the war, in China, India, North Africa.

In the rooms of the Triennale there is a lot of space dedicated to Milan. The central nucleus is a work specifically created by Steinberg for the Lombard capital: four preparatory drawings, each consisting of a strip of paper up to 10 meters long, which were engraved with the “sgraffito” technique on the walls of the Labyrinth of boys, designed for the 10th Milan Triennale in 1954. In these four leporelli, part of the donation to the Braidense Library, we see how for him the ‘line’ can become a continuous narrative experiment. Not by chance he said “The line is my real language“.

The exhibition is accompanied by a book.catalog, published by Electa, entitled Steinberg AZ, organized as a contemporary “encyclopedia”: a volume edited by Marco Belpoliti that analyzes the work of Saul Steinberg in its many aspects,
from architecture to drawing, from the relationship with Milan to that with New York, to maps, to letters with Aldo Buzzi, to the artists who were his friends and companions such as Costantino Nivola and Alexander Calder, but also Alberto Giacometti and Le Corbusier.

One thought on “The multiform art of Saul Steinberg, with ‘drawn calligraphy’ pays homage to Milan”