Teresa Arijón: “Desire is that air that surrounds everything” 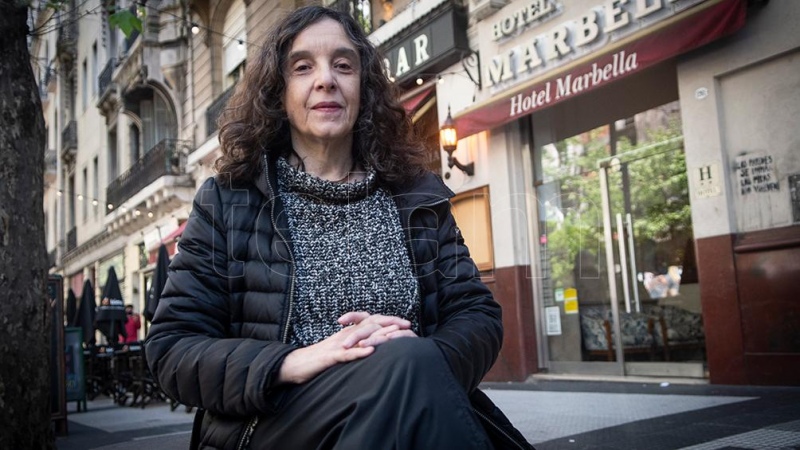 From a writing that intertwines autobiography and chronicle, Teresa Arijn founds her experience as a model of artists for twenty years to investigate adored and sanctioned female bodies throughout the history of art, an exploration that spans centuries and disarms concepts that are now problematic. like that of muse, a category that according to the poet, essayist and translator “ceased to exist a long time ago, perhaps surrealism was the last movement that advocated its existence.”

“Some models inspire painters by their appearance, others by their personality”, the author inaugurates the first of the stories that intertwine the autobiographical, the chronic and the reflections on women, desires, passions, rejections, forgetfulness and various punishments that are they slip into “The Painted Woman”, recently published by Lumen.

Arijn (1960) studied theater and as a public poet “The Written” (1988), his first book of poetry arising from the silences of living modeling that he adopted as a way of life in the 80s, or “Puentes / Pontes” (2003), the first bilingual anthology of contemporary Argentine and Brazilian poetry in which he participated. She is a chronicler and literary translator with more than 20 years of experience and received the Konex Award for translation in 2014. She translated writers such as Daniel Defoe, Virginia Woolf, Clarice Lispector, Rubem Fonseca and Michael McDowell (“Golden Needles”), among others. .

-Tlam: Why tell about the role of the artists’ models?
– Teresa Arin: The idea came from my own experience: I was a role model for artists for over twenty years. It was my way of making a living, and it was also a pleasure, an apprenticeship. Models have been and are key to art and its history, but we know very little about them. The stories almost always focus on the artists, and I think it’s time to look at the other side of the mirror and talk about those who worked alongside them and made the work possible. Without Victorine Meurent, Manet’s “Olympia” would not exist; Without the anonymous girl who posed for Svori and was so stupidly criticized by the “experts” we would not have The Awakening of the Maid, one of the greatest nudes in Argentine art. Without women willing to give that pose, we would not have the captives of Blanes and Della Valle either. Nor do we know the extraordinary work of Aleah Chapin, who paints his mother’s friends, all mature women. The relationship between artist and model, and more specifically between the work and the model, is singular, unique, precious. In the book I try to narrate that, reflect it, make it vibrate on the page, as color vibrates in painting.

-T: How is your poetry related to modeling for visual artists?
-TA: The pose sessions are long and leave your mind free. That immobility of the body brings you into a kind of emptiness, like a meditation. And ah, in that void of thought, words, lines, even entire poems began to appear that I tried to memorize and then ran to write during breaks. I always carried my notebook in my backpack because poetry was there, in those moments alone with myself that gave me the pose. I could say that I wrote my first book posing.

-T: How would you describe the sensation of being observed, studied as a body / object?
-TA: On the one hand there is you and your relationship with your body, with showing it in such a way that it might seem passive, but in reality it is not. Knowing that you are being watched is something that may upset you at first, but that you quickly accept as part of the game. The model is also a character: when I pose it is me, Teresa, and also that other one who stands and shows herself. Elizabeth Hollander, a British historian who was also a model, said: “The question was not to be ‘an object’, but to know if I would allow myself to like ‘being an object’.” I never felt an object. And if I was an object, it would have been an “art object”, like a surreal landscape by Lula Mari or Beuys’s dead hare.

-T: And your relationship with the painter Juan Lascano?
-TA: My relationship with Juan is rooted in something I wrote in the book: we are two egos that vanish, that of the painter and that of the model. I was his exclusive model for fifteen years (except when I was going on a trip for literary reasons). I was happy to pose for Juan, I loved seeing myself reflected in his work. Between leos, drawings and watercolors we made more than 700 nudes together. Our relationship as artist and model is very similar to our friendship: it is discreet, ceremonious, subtle I would say.

-T: Is there an intimate relationship between the body and poetry, with the woman’s naked body?
-TA: Poetry has an intimate relationship with everything, I dare say. Poetry is intimate and immediate: it is a spark. The body is there, with its power and its limits. And it is the matter of poetry, perhaps its most abstract matter. The naked body of the woman, as named, is and has been “a theme.” According to the few, depending on where you look at it, it was exalted, adored, mocked, everything you can think of. Now, and for quite some time, women speak with their own voices about our bodies and other bodies. The body is this that you see now, but it is also a construction. An idea.

“On the one hand there is you and your relationship with your body, with showing it in that way that might seem passive, but in reality it is not. Knowing that you are being observed is something that at first can disturb you, but that you immediately accepted as part of the game””

-T: Thinking of artists like Rafael and his passion for the baker’s daughter, Caravaggio, Courbet with the work that dazzled Lacan, Baudelaire with Jeanne Duval, Gauguin or a Prilidiano Pueyrredn with “his” mulatto, what happens to desire? and what about your wish?
-TA: Rafael died in the arms of La Fornarina, or so I like to imagine. Baudelaire burned on his black Venus. Prilidiano and his mulatto were carried away on long summer afternoons, in a country house full of blossoming orange trees. Desire is that air that surrounds everything. A seed in hand. An outburst. There are many stories of fierce love and desire in that small world that each painting contains: that intimacy. And my wish? My desire always went around the bush.

-T: How did you get to the stories in the book?
-TA: They were several years of investigation, with the five senses on alert. Antennas that captured everything that was appearing, in addition to what I was looking for. I knew many of the stories I tell and there have been many left to tell. The subject is almost infinite. One model leads you to another, an artist like Lee Price who paints beautiful women surrounded by food makes you think, the humor and daring of Claude Cahun force you to look at your own life with another lens. Perhaps my work as a translator has to do with this: to translate, you have to put yourself in someone else’s place and write. And in The Painted Woman I put myself in the place of the others when I write.

-T: In those chronicles that shed light on witness stories of artists and models, did you seek to demystify and deconstruct the role of the model and the artist? How is it linked with the oriental gaze that you also mention?
-TA: The oriental that comes from Japan. When Kawabata Kysai does not understand why Westerners pose their models and adds: if the model were a bird, she would not stop moving. And then he proposes a Zen exercise: observe the bird -the model- until he remembers the pose with such perfection that he no longer needs to look at it when painting it. If I tried to demystify something, it is the assumption that something of an explicit sexual nature “always happens” between model and artist. Sometimes it happens, but it is not a necessary condition of the trade.

-T: In the autobiographical texts you conts some situations that were dangerous for you at work as a model. How do you consider that risk today?
-TA: I suppose the risk still exists, but it is less. When I started posing, you would leave a little sign with your name and your phone number at the Stimulus of Fine Arts Association and they would call you and there you would go. You didn’t know who or what you were going to meet. Now Google solves some doubts in advance. Anyway, those situations that I tell in the book were the exception to the rule.

-T: You relate your encounter with some of the Guerrilla Girls. How topical is there in that intervention of Ingres’s “The Great Odalisque” with the Gorilla’s Head from 1989?
-TA: The “Guerrilla Girls” update that data on their page. And that’s where you know, yes, from 1989 to today more artists “entered” the Metropolitan in New York, but the “naked women” that hang on its walls continue to outnumber them. And notice that El Prado, a museum founded in 1819, just held its first exhibition dedicated to a female artist, the Flemish Clara Peeters, in 2016. Almost two centuries later.

-T: How do you think the place of the “muse” is resignified today? The painted women began to laugh.
-TA: I think that “muse” has long since ceased to exist. Perhaps surrealism was the last movement to advocate its existence, in the sense of a magical, inspiring, and generous woman who would lead the male of our species to a kind of intellectual and emotional fulfillment. I remember Max Ernst’s painting, “Au rendez-vous des amis”, where all the male surrealists and two infiltrators (Dostoevsky and Raphael) and a single woman appear: Gala Diakonova, the anti-muse. From that moment, with Gala portrayed by Dal, the painted women begin to laugh openly. And now they laugh out loud, like in a 2013 Rory Devine watercolor.

-T: Why did you want to recover the experience of posing for Juan Lascano?
-TA: He wanted to end the book with that scene: one last session, one last pose. And I wanted to see myself painted again. To be that again: the painted woman.