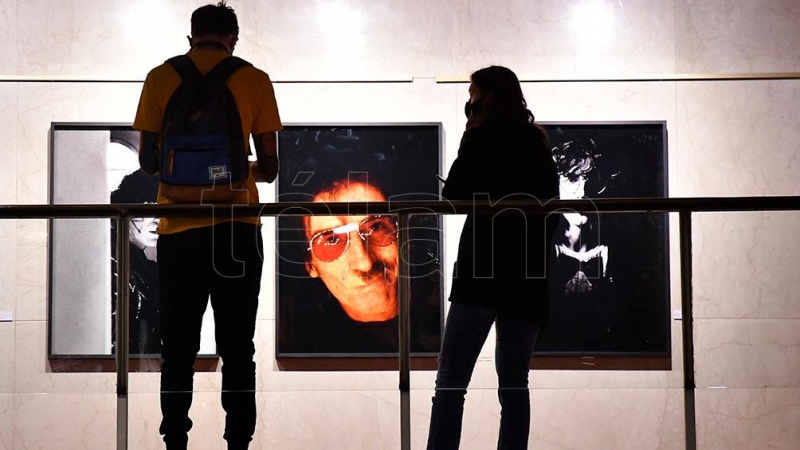 The Fotogalera of the San Martn Theater when viewed from de Charly. (Photo: Alfredo Luna)

A few days after the 70th birthday of Charly García and within the framework of the numerous tributes that the city dedicates to him, two exhibitions can be visited, in the Planetarium and in the Photogallery of the San Martín Theater, which reveal the visual imprint that accompanied the former Ser Girn throughout his career, a restless, changeable, reckless figure, in sessions where the unforeseen always reigned, according to the testimony of the photographers who portrayed him throughout his history.

“How to get Charlys” It is entitled the exhibition that can be visited until November 28 in the Alfredo Alcn Hall of the San Martn Theater (Av. Corrientes 1530) with free admission where they are displayed 30 images of Nora Lezano, Hilda Lizarazu and Andy Cherniavsky -ten of each one-, while upon entering the Planetary (Sarmiento and Figueroa Alcorta) selected two of his favorite photographs Gabriel Rocca, Guido Adler, Maxi Vernazza and also Cherniavsky, until November 12.

Both samples show personal looks and different representations of Charly Garca, the talented musician who like a chameleon showed his most diverse facets, that of “Say no More”, or “Peperina”; from “Going from the bed to the living room” to “The daughter of the tear”, or the beginnings with Sui Generis, Ser Girn or the Bird Making Machine, in recitals, tours, launches or intimate moments.

Garca’s followers can appreciate the photographs in the San Martn until November 28. (Photo: Alfredo Luna)

Provocation, excess or narcissism are just some of the masks that this musician has revealed, but also a more playful side and even a certain fragility, in the sessions held at his home, in live performances, during recordings and in productions for record covers and magazines.

Some in color, others in black and white, from their inception to more recent times, the images from both exhibitions bring together captures that reveal the multiple visions these artists have built during their time with the local rock star who On October 23, he will be 70 years old.

“I started with Charly when I started to take my first photos and it’s already been 40 years of work. I knew him from a very young age as soon as I became a photographer. And he is a somewhat reckless character because of how changeable he is. I have to be prepared with three cameras because you don’t know where it will come out. He is one of the people I photographed the most, “he tells Tlam Andy Cherniavsky, the only one whose images are in the two exhibitions currently dedicated to bicolor.

From its beginnings, in the 80s, Cherniavsky stood out as one of the great rock photographers in Argentina. He made special productions, album covers and press photos of all the figures, with special emphasis on his friend Charly Garca. Then he successfully ventured into the world of fashion and advertising. One of the images, from the 80s, shows her sitting on the floor next to Charly, the two of them laughing, dressed alike (with jean gardener) in front of a plate with an immense pot of Gandara dulce de leche.

“My photos show the different faces and different times of Charly, for having followed him throughout his career. Honoring him is beautiful. In the photographs there is the story of his life but also of mine and that of rock in Argentina. For me it is like a history book. And everything I did, where I was, where I went, accompanies me in my memory. It’s like a playlist of life “, recalls the photographer.

In the photographs he can be seen with a red cape and blond hair, hugging Nito Mestre behind his back, sitting on a cordon next to Andrs Calamaro, smoking and wearing a hat, hugging his guitars, in the recording studio, with a drink in hand, wearing sunglasses, crossing a street, reading, sticking out his tongue, playing the viola, covering his face, with a mask, with an angelic expression and, also, quite the opposite.

“One of the photos I chose is from prehistory. A time where there was not much production. It was about ringing the doorbell at his house, opening up, looking at us and seeing what photos could be taken. There is Charly taking communion for a rock magazine where he worked, where musicians lent themselves to being photographed as their opposite “, Gabriel Rocca account, during the inauguration in the Planetarium. Night falls and the lights of this publicity space are turned on while pointing to the image of an angelic Charly, in white, kneeling and with his hands together pointing to the sky.

“I don’t want to say that he is exactly the opposite of Charly, but there he goes”, re the photographer who began his career in the legendary magazine Pelo, where he met the most important musicians in the country. His photos were the covers of records, magazines and posters.

The images refer to all the times of Charly, from Sui Generis (Photo: Alfredo Luna)

Another of his images, “also from prehistory” shows Garcia dialing a line telephone, with cable, next to a cassette tape, a minicomponent, a written paper diary and some vinyls, “all elements that no longer exist”, shoots Rocca, giving an account of a long career of more than 35 years, which includes not only celebrities from rock, but also from fashion, film, TV and sports.

Charly is completely painted silver, his face, arms, legs, like a Martian. The tape of Say no More, like a captain, on the arm, while looking at the camera, on an iconic cover of the popular Rolling Stone magazine, which captur with on Cherniavsky lens.

That day everything was ready for a press conference in Cherniavsky’s photography studio; It was full of journalists, cameras from everywhere, there were many people, but Charly never appeared. Several hours later, when everything was disarmed – always the unforeseen one – the musician calls Cherniavsky: “I’m at home all painted silver, what do I do?” “Well, come on,” replies the photographer. “That’s how these beautiful photos were born, in a session that had a lot of that restless Charlie throwing challenging messages. Being painted silver was part of that. He was so excited that it was difficult to grab him where the lights were marked, he is out of place and not where it had to be but still are photons “, recalls Cherniavsky.

On March 3, 2000, one of the most commented events occurred around the history of the always controversial pianist: threw himself from his room on the ninth floor of the Aconcagua hotel, in Mendoza, towards a pool. “It was the first sporting thing I really enjoyed in my life,” he said just seconds after diving into the water. It was not the musician’s first scandal, but it was the most resounding.

Years later, will there come a kind of tribute? at that time, but from the hand of photojournalist Maximiliano Vernazza. This is shown in the color image of Charly climbing some stairs and about to jump into a pool at a beach inn, this time much less distance between them.

“We were in Pinamar and we agreed to take a photo in the hotel jumping into the pool, but hey … it was shot the day before the session, from the first floor. And a couple who were sunbathing got scared, they made a stir at the hotel and they threw us all out, “says Vernazza, who met the singer in 1997 for a magazine note and Since then he photographed him on recordings, tours, birthdays, his usual vacations in Pinamar and Villa Gesell or in his refuge, in his department of Coronel Daz and Santa Fe.

“Then he said ‘Let’s do like when I was a boy that I would go to my uncle’s field and throw myself from the mill to the Australian tank.’ We were at the Parador Robinson, on the beach, and he asked for a ladder, people were slow to bring the stairs and I got nervous and I remember I told them ‘apprehensive because the photo is now, otherwise Charly can go’. They brought it and Charly asked for a red robe, but we didn’t have one. He finally threw himself off, wearing the red robe, but It wasn’t as deep as I thought, so it came out a bit sore. Later we took a lot of photos more “, relates the photographer, in another story where the unforeseen event coincides, registered trademark of the creator of” Modern Clicks “.

There are studio and newspaper photographs. (Photo: Alfredo Luna)

For Cherniavsky, two few of Charly could be pointed out broadly, “One is Peperina’s and the other is Say no more: The first was a calmer Charly, not from his lyrics, but from his attitude, without ceasing to be a provocateur. He developed until he became merely a provocateur from every point of view, especially when taking the photos; impulsive, restless, eclectic, rebellious, defiant. And that is Say no more “, assures the photographer in reference to the eighth solo studio album by the Argentine musician. , edited in 1996.

Guido Adler captured with his camera the last decades of Charly, the most recent. And this is how a recent image -although pre-pandemic- looks, in full concert at the Gran Rex theater, the author of “Rasgua las Piedras” in front of the keyboard, in which the author constantly plays with the conceptual: “The image is moved I took it from high above the theater but that is very difficult, because he is always on top of all of us, “he claims, explaining the out of focus. In the other photo that he chose for the exhibition, he can be seen “Charly and an antenna in the background”, without further explanation, although a clear reference to the lyrics of his song “Chipi Chipi” (“I only have this poor antenna that conveys what to say “).

If the perfect photo has to be a fusion of balances between light, acting, framing, attitude and that inexplicable moment of the click, the authors of these images overcame obstacles and managed to capture the errant and unpredictable Carlos Alberto Garca Moreno, between outbursts of inspiration and eccentricity, as elusive as it is intense, as lucid as it is controversial, transformed into an essential figure of the local rock culture.