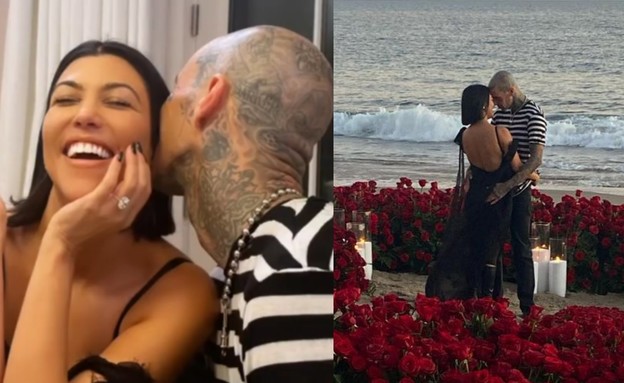 After quite a few rumors and expectations, this morning (Monday) Courtney Kardashian and Travis Barker got engaged. These are the first engagements of Courtney Kardashian and the third engagements of Travis, who has been married twice before to two different women.
Courtney and Travis started dating last February, but only officially launched their relationship in April. Since then they have not stopped posting their love affair anywhere on the net, especially with hot pictures, love posts and quite a few mutual affections. Travis and Courtney have been around for weeks talking about an impending marriage proposal, and this morning, after quite a bit of anticipation, it happened.

According to insiders, Courtney and Travis had just returned from a several-day trip to New York, and Travis offered Kurt to leave California for a trip to Montsito. Courtney, according to acquaintances, did not suspect anything, but as soon as they arrived at the scene she understood what it was all about.

Travis enlisted the help of the family’s flower arrangement, and as soon as Courtney saw the thousands of roses waiting for her on the beach, she realized what it was all about. “It’s a place they both really like, they have a lot of memories from there,” the insider said. “Everything was super exciting. Travis got down on one knee and Courtney kept crying and saying ‘I love you.'”

The exciting offer was also watched by Courtney’s sisters, Kim and Chloe, her mother, Chris, and her partner Corey Gamble, and now everyone is celebrating the exciting event at the local hotel. One of the videos uploaded to the network shows the huge diamond ring on Courtney’s finger – which apparently cost Travis many millions of dollars.