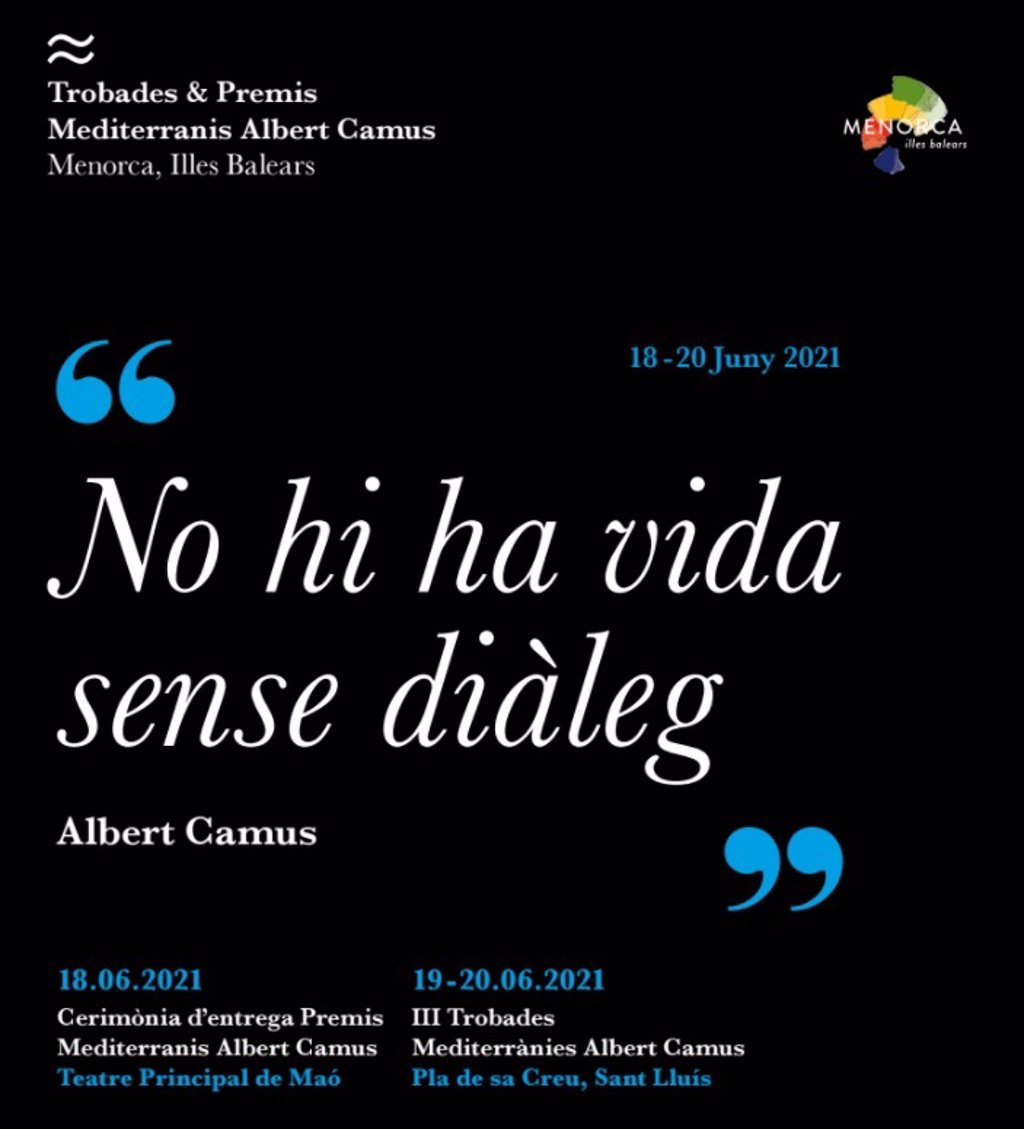 More than 20 speakers from different disciplines, from different parts of the Mediterranean and among which there will be writers, visual artists, musicians, dancers, thinkers and experts, they will attend from this Friday, June 18, to the III edition of the Trobades and Albert Camus Awards that will take place in Menorca.

As they point out from the organization, This year’s edition expands its contents and participating artistic disciplines, with contributions to the Mediterranean dialogue from speakers from different areas of the region such as Morocco, Algeria, Israel, Palestine, France or Spain.

Thus, this June 18, the Albert Camus 2020 Awards will take place at the Teatre Principal in Maó. In September 2020, the organization was able to announce its two winners (Edgar Morin and Abdo Shanan), but was unable to hold the gala due to the Covid-19 pandemic. The ceremony will feature a performance by the Israeli singer Noa, accompanied by Gil Dor.

On June 19 and 20, the third edition of the Trobades will be held, with the usual debates, in the emblematic Polivalent Albert Camus room in Sant Lluís. On Saturday, June 19, the public and guests are also scheduled to travel to the island of Lazareto to enjoy the choreographic performance ‘El Quitador de Fears’, specially adapted for the Trobades.

The performance will be in charge of Amie Mbye, dancer and teacher specialized in Afro-modern and urban dances, under the direction of Aïda Colmenero Dïaz, choreographer, dancer and creator, among others, of the project Ella poema.

“The pandemic has left us even more orphaned of certainties, while making us more aware of the fragility that surrounds us. This sum has undoubtedly accelerated our desire to understand “, say the organizers of the Trobades & Premis Mediterranis Albert Camus.

For this reason, they are “convinced that the legacy of Albert Camus can help us in this search for answers on some of the questions that haunt us, that is why we set ourselves a single mission: be, from Menorca, facilitators, light that is projected in the storm, meeting point of critical voices from the two shores of the Mediterranean“.

In the first edition, which took place in 2017, the chosen motto was the return to the island, the return to the origins since Albert Camus thus returned to the island of his grandmother, Menorca, an island that he did not know. In its second edition, the Trobades of 2019 revolved around the sign of Prometheus to undertake the paths of rebellion according to Camus, one of his key concepts, the one that occupies a central place in the triptych that he intended to write and that included ‘ The myth of Sisyphus’ (absurd), ‘The myth of Prometheus’ (rebellion) and’ The myth of Nemesis’.

“In a year of resilience such as this one for any project that seeks to restore community ties in times of pandemic, we want to embark our audience and our guests in the reflection around the following idea of ​​Camus: ‘There is no life without dialogue’ “, they emphasize from the organization. This phrase is part of the conference entitled ‘The witness of freedom’ , delivered by Albert Camus in the Pleyel room in Paris, on December 13, 1948.

This edition of the Trobades & Premis Mediterranis Albert Camus will therefore try to open dialogue and maintain continuity with previous editions, with the same debate format, in a crossroads of guests from multiple horizons.