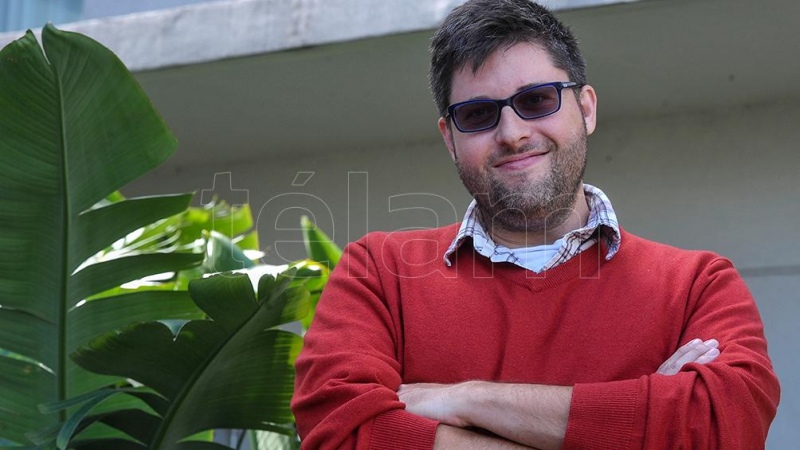 The American Writer David Poissant, author of an extraordinary and overwhelming book, “The sky of the animals”, and of a rough first novel like those stories, “Vida de lago”, which earned him a brilliant place in the contemporary literature of his country, he tells, on the occasion of his participation in the Filba literary festival, that he continues to write about that North American society where for the first time in decades children are worse off than parents, dissecting family and class ties.

“I am glad that Trump is gone, but I am concerned that he is not gone forever,” he says.

Poissant will give this Wednesday a narrative class by Zoom for the Filba -the squares, with prior registration, are already covered- and dialogue with Tlam about his work, the literary scene of these days and today. He is working on a second collection of short stories and a second novel. “The collection of stories is provisionally titled ‘Sons and Daughters,'” he says. They are all about parental relationships, mostly set today in the United States. The novel is in progress, but it also has to do with a family in the past. American state of Florida “, anticipates.

It is in Florida where he has lived with his wife and twin daughters for more than a decade, since he decided to stop teaching as a language teacher. to dedicate himself to literature and teach writing to a teacher of Fine Arts at the university of that state. I was born in 1979 in Syracuse, New York, and grew up between the suburbs of Atlanta and Georgia, where they moved driven by higher wages. Lived in Arizona, Ohio and now lives in Orlando.

“Animal heaven” focused on the ‘blue collar’, the working class from which his parents rose to the middle class that he later portrayed in “Lake Life.” The novel speaks, from the point of view of each of the six protagonists, of a retiring couple who decide to sell their vacation home and the conflict that this causes in their adult children, who are less socially and economically favored than they are. during the last weekend that the family shares in that house, before it changes owners. In it one of the protagonists expects twin daughters.

If one of those stories served as a trigger for “Lake Life” – the grown-ups Richard and Lisa Sterling are the young protagonists of “The Geometry of Despair” – for now, says Poissant, “the new plant a world of its own, although there is a possibility that Amelia, Marco’s girlfriend in “Lake Life”, will travel from the Carolinas to Florida to make a cameo. I am always writing short stories and essays. I have no shortage of ideas, I just lack time. ”

In the Filba, the writer will review undervalued elements that make a good narrative possible, from the rhythm to the levels of psychic distance in the point of view, passing through the maintenance of thematic or visual motifs throughout the work.

“There are pros and cons to communication in a digital world. The silver lining is that the ubiquity of the Zoom reaches a wider audience than ever before. Unfortunately, I have not yet experienced a virtual read that produces the same electrical shock as an event. I miss the real human interaction of the old days, although saving lives is much, much more important than attending events or selling books. ”

Poissant published short stories and essays in well-known media such as The Atlantic, The New York Times, and The Chicago Tribune. Among the awards he won with “El cielo de los Animales”, published by Edhasa in Argentina, as well as “Vida de lago”, are the Alice White Reeves Memorial, the Matt Clark and the Rope Walk Fiction Chapbook.

-Tlam: The stories of “The sky of the animals” and the novel “Lake life” dissect family ties. For Katya Adaui, a contemporary Peruvian short story writer, “the sea, like the family, has that ambiguous thing that shelters you and at the same time frightens you.” For Fabin Casas, another contemporary writer of yours, an Argentine, “everything that rots forms a family.” What raw material is the family for your literature?

-David James Poissant: A stranger on the street or on Twitter can tell you an evil that stays with you for days, but a father can say three words that will haunt you for life. A brother can strike fear into your heart with a sigh. I love all the above metaphors. It is difficult to measure the degree to which we are tied to the sea, to rot, to the lake, or to the family currency. The family can be a cult, or it can be the beast that saves you. I believe, to some extent, in the interconnectedness of all things. Casas’s quote resonates with Richard Powers’ 2018 Pulitzer Prize-winning novel “The Overstory.” When trees rot, their skeletons become homes for families of insects, other animals, and fungi. Trees and fungi exchange nutrients. Everything is connected. It all depends on the life or death of a living being. And this is also a kind of family.

-T: Your stories speak of another great family: the American working class and an upper middle class that does not inherit their benefits to their descendants. Why this generational situation, this reverse social movement that describes “Lake life”?

-DJP: My generation is the first in over a century, in the United States, to do worse, economically, than all previous generations. There are many factors, but the three most important are probably that taxes are too low, that healthcare is not yet universal, and that we are destroying our environment. Younger generations of Americans will inherit a land with far fewer trees and species, much more polluted soil and waterways. They are inheriting a broken healthcare system that prioritizes the lives of the rich and privileged and a generation of parents and grandparents with increased health and social needs. I don’t think the answer is to ditch the services. We must take care of everyone. But that costs money. We need more services, which means more money, which means more taxes. And many politicians will vote for the welfare of companies instead of the welfare of citizens, for the safety of companies instead of social security. We have to raise taxes to put money into the health and lives of people and land and waterways, which means taxing the top earners with higher taxes. But many people do not like that idea, they prefer to keep their money and let those around them suffer.

-T: Some of your texts, so literary, speak very clearly of the extreme political polarization of the United States, perhaps never clearer than the day of the attack on the Capitol by Trump supporters against the newly assumed president Joe Biden. Days in which, on the other hand, in Argentina, “Vida de lago” appeared. What do you think that phenomenon responds to?

-T: Like so many before, your work raises the end of the idea of ​​the American dream. Does American society today share a common dream, centered on humanistic rather than economic progress?

-DJP: I think it is shameful that the United States has had 46 presidents, 45 of whom have been white men, that we are still fighting for the rights of women, minorities, LGBTQ + people and the poor. I don’t know if the United States will ever prioritize the lives of its people over the growth of its economy. I hope we do. I hope we do it soon. The worst thing is that it is not an exclusive trend of our people. Western Europe is grappling with many of the same dilemmas.

-T: Did the pandemic have any impact on your work?

-DJP: The pandemic made writing more lonely than it already was. It was very difficult for me to write in quarantine. But this year I feel like I’ve found my voice again.

-T: What are you reading now?

-DJP: Among my recent favorite readings are “The Weather Book” by Jenny Offill and “Stoner” by John Williams.