New tribute to Horacio González: they presented a book that traces his thought 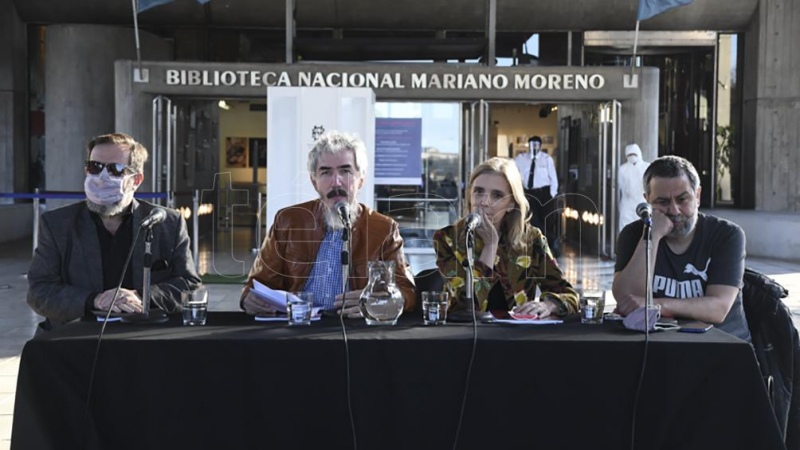 In the compiled texts, the sociologist displays a deep analysis of the politics of the period of the Nstor and Cristina Kirchner mandates (Photo Ral Ferrari)

Socilologists, journalists, friends and family remembered Horacio Gonzlez, the outstanding Argentine thinker who died on June 22, as a generous person and “one of the brightest minds” in Argentina this Wednesday afternoon, during the presentation of the book “Defeat and Hope: an Argentinean Folletn (2003-2015)”, in an activity that took place on the esplanade of the National Library, which was directed by the sociologist and teacher for a decade.

“This book honors a legacy that Horacio left and that, as he said, is an open and complex legacy, always full of questions, folds and questions,” said Conrado Yasenza, editor of La Tecl @ Ee magazine., which together with Grupo Editorial Sur were in charge of compiling the material, which was presented in an emotional activity of which the president of Tlam, Bernarda Llorente, took part.

Accompanied by a Foreword by sociologist Mara Pa Lpez, the ten selected texts that make up this volume were written by the essayist during the years 2003 and 2015, and began to be published from February 1, 2016 to March 7 of that same year in La Tecl @ Ee.

“In addition to being brilliant and generous, a trait that always shocked me was his ability to think about everything not from a canonical intellectual role, but from the philosophical disposition to think freely and critically, freed from obedience and subjection”, Yasenza assured. .

About Gonzlez and the book presented

Born in Buenos Aires in 1944, Gonzlez was a renowned sociologist, philosopher, writer, researcher and teacher, widely noted for his reflections on the Argentine political, cultural, literary and educational scene.

In the compiled texts, the sociologist and writer displays a deep analysis of the political situation of the period marked by the mandates of Nstor Kirchner and Cristina Fernndez de Kirchner, intertwining “conjunctural and long-term analysis.”

In the first chapters, the editor explained, Gonzlez gives an account of “the attack of the communication companies” against the governments analyzed by him, an action that is reproduced throughout the region “to demolish popular-style governments.”

Gonzlez problematizes about the end of the analysis, in addition, “the defeat before macrismo” in 2015 and “everything that later meant” that government, among other things “the serial dismissals” and the “devastating action of appointing (Alberto ) Manguel as director of the National Library ”, stated Yasenza.

The words of those present

For her part, the president of Tlam, Bernarda LlorenteGonzlez highlighted his character as an “intellectual provocateur”, by “stretching” the margins of interpretation with an always “very original” thought.

“Horacio was one of the brightest minds in this Argentina,” said the journalist and political scientist. during the book presentation, while highlighting his “Great generosity” and “extreme courage”, for leaving “the easy place to accommodate his thought to that of others.”

With a speech of shared hope and admiration, Llorente – like the rest of those present – assured that the thought of this sociologist is today “more necessary than ever” and that he is constantly faced with the question of “what would Horacio say? Gonzlez about it “.

During the commemoration, there were also present Juan Sasturain, current director of the National Library, Jorge Taiana, Minister of Defense of the Nation, and Liliana Herrero, partner of the sociologist and writer, who thanked him in shock and highlighted the importance for Gonzlez of the space where he was reminded.

Gonzlez’s passage through the National Library

The National Library, located in the Buenos Aires neighborhood of Recoleta, was in charge of this socilologist between 2005 and 2015, the year in which he himself submitted his resignation.

In addition, he was a professor at several national universities, including those of the city of La Plata and Rosario, where he taught, among other subjects, Aesthetic Theory and Political Theory, a subject devised by him and which currently bears his name in his honor.

Daro Capelli, socilogo and compaero de docencia, also current editor of the magazine El Ojo Mocho, which was directed by Gonzlez, He stated that this is a book with an “undeniable political dimension” and that “it is in line with Horacio’s interest in approaching journalism as a problematic object.”

Llorente is constantly faced with the question “what would Horacio Gonzlez say about it?””

In this regard, he highlighted the deep interest and commitment he had for the reality of the country, so he was always kept informed and aware of the facts.

“Hegel said that the reading of the newspaper is the morning prayer of modern man: Gonzlez was a faithful reader of newspapers every morning,” related Capelli, who claimed to adore him “as an intellectual and as a friend.”

At the end of the presentation, the writer Carlos Caramello concluded, for his part, that “Horacio will always be needed to explain things to us with his wisdom,” especially for those of us who “profess Horacio in this agnostic creed.”

The photographs that illustrate the book belong to Carlos Bosch, Pablo Piovano, Rafael Calvio, Ximena Duhalde, Marcelo Huici and Guille Llamos, and their selection was in charge of Paloma Garca, who assured that “it was not easy” to search for images that summarize “so much life ”, but at the same time“ an honor to be able to accompany this project ”.