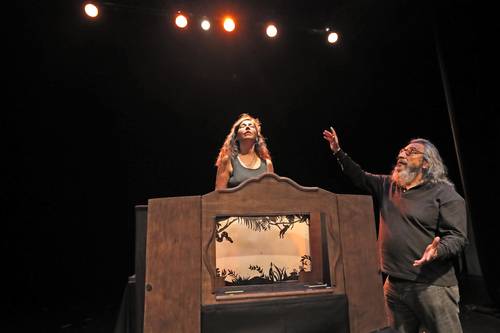 The montage does not adhere to the historical background of this manuscript that has fascinated archaeologists and specialists, but is reinventing those mythssays the director of Badulake Theater.Photo Yazmin Ortega

The Manuscript 512 contains an ancient magical story and an adventure through the mighty tributaries of the Amazon River. In the words of José Luis Cruz, author and director of the stage production at the National Center for the Arts (Cenart), there is a part of children’s reflection, at the same time as a fierce criticism of consumerism, of the devastation that capitalism has made of the great jungles.

Creative freedom and imagination run in a game narrated by the actress Ainé Martinelli through the interpretation of various characters, set through a paper theater, in a minimalist order. I, who make great productions, now go towards the essence of theatricality, the simplest and most miniature. It is a fascinating world that unfolds through the text that is adapted to the theater of objects and shadows.

The center of the narrative is an ancient manuscript, dating back to the earliest civilizations, such as Egypt, Mesopotamia and Greece. It has fallen into the hands of such literary greats as Shakespeare, Marlowe, and Raleigh; It goes from hand to hand until it reaches Cervantes, for example, being the magical inspiration for his pens. An archaeologist is the one who tells the passage of the writing to the jungle with aborigines in the Amazon, a legendary lost city and the myth of El Dorado, which promises immense riches to whoever finds it.

Along the way, the miniature human heads made by the indigenous people as part of a ritual are also shown, but which the colonizers begin to commercialize, destroying humans and the natural resources they find in their path.

Everything happens in a miniature theater and the actress’s one-person show on stage at the Foro de las Artes, where the Badulake Theater company will conclude performances on August 14. It is taking us to this endless story, which has no limits; the public is imagining with us through these scenic metaphors and through the poetic texts that I wrotesays the playwright in an interview.

There is Manuscript 512; It is one of the jewels that protects the National Library of Rio de Janeiro. The enigmatic document belongs to the colonial period of Brazil, where there is talk of this city lost in the jungle and that for centuries has fascinated explorers, archaeologists and historians, without success in finding its location.

In the theatrical piece, which does not stick to the historical background, These myths are being invented and through a manuscript that, like a potion, contains all the stories that humanity has created. Each individual who owned it inspired him; for example, the Orphic chants of Homer, the legends of the foundation of Egypt, the Chinese world, the great civilizations.

The stage director and author of Manuscript 512 expresses that It is a fascinating theme that comes from the imagination of the closure of the pandemic and the insistence of reflection on the way of life, the civilization that has been created through the developmentalism of Western culture, which comes from the nineteenth century until now, with the establishment of savage capitalism.

It is a small format work in a theater, built by Pablo Cueto, to which is added the music of Eblen Macari and Olga Martínez, who incite the imagination. It could not be done in another way because the health circumstances prevented it; there was no opportunity to live with so many people, but to do it more like a soliloquy that an actress develops from various acting techniques.

Although the theatrical techniques would suggest children, the author clarifies that I really like working for young people, because they have an open mind. It is not for children, it is for people who are of a certain age and who can talk with us, although the resources have to do with the children’s imagination. We all have that infantile mentality that we are losing through the world, through life; we must remember that the greatest creators were children; for example, Picasso or Mozart, great creators who were fascinating geniuses, but they were also children. I recover my childhood world and my tours of the jungle, where I was born, in the south. I have that fantastic world.

Manuscript 512 It premiered at the Circulo Teatral, in June it had presentations at the Hellenic Cultural Center and now it arrives for a short season at the Foro de las Artes del Cenart (Río Churubusco 79 and Tlalpan), with performances from Thursday to Sunday.

Later, he will travel to the south of the continent, to Argentina, Chile and Brazil, where the magical tributary of the manuscript 512, that describes the predatory sense of western modernity and the destruction of habitat.

One thought on “Manuscript 512, fierce criticism of ecocide and predatory Western modernity”