Rachel Cusk: “I write from the material I have at hand but that says nothing about who I am” 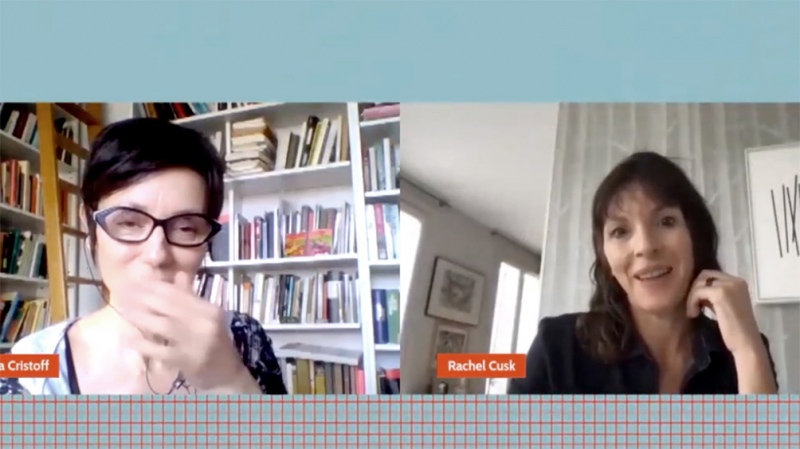 Rachel Cusk had a chat with her colleague Mara Sonia Cristoff.

“Literature, the medium in which I work, is saturated with male and capitalist ways of seeing the world. Sometimes someone does something different but the everything remains“, defined this Thursday in the framework of her presentation in Filba the Canadian writer Rachel Cusk, author of controversial pieces such as” A Contraluz “,” El trabajo de una vida “or” Despojos “that expose the deranged extravagance that causes a divorce and they anticipated the genealogy of texts that today thematize the malaise in motherhood.

During a chat he had with his colleague Mara Sonia Cristoff within the intimate segment of interviews that the Filba baptized as “In first person“, the author born in Canada but with a literary journey that took shape when she decided to settle in Great Britain, was issued around issues such as the exercise of self-fiction or language as a resource to counteract the weight of patriarchal views on the world. and he explained why he believes that the engine of the future could be in the visual arts, “where an advance implies a movement for all”.

For almost an hour, the authors discussed the corners, direction and purpose of the work of Cusk (1967), who after having studied English philology at Oxford University and having published his first novel, “The salvation of Agnes“At the age of twenty-six, he built a successful career as a dark comedy novelist. Later, he turned towards a writing that some classify as autobiographical, first with”Remains“and then with the triloga composed by”Backlight“, “Trnsito” and “Prestige“, in which he inquires about different representations of the couple, divorce and motherhood.

Cristoff began the talk with an ironic reference to a passage from “Prestige”, in which the narrator makes fun of how authors interact at festivals and literature conferences. “It’s easy to satirize festivals, but that doesn’t mean you don’t extract them,” Cusk laughed. “This separation between us, speaking through a computer, is finally very strange. He reflected on the fact that his participation in Filba was virtual.

Later, Cristoff told that the work of the Canadian author arrived in Argentina published by Libros del Asteroide, valued the quality of the translation and consulted her on how she deals with this aspect in the case of her books. “The translator is another organ of the writer, or a heart. I have become friends with some of my translators, in honor of this relationship that is generated, “assumed the author and said that for months she has lived in Paris and faces the issue of language as never before.” Every day I see myself faced with the difficulty of translating myself into French, a language that I feel I barely manage. Somehow, they will reincarnate into a three-year-old girl. It is beautiful to make new sentences and experience sounds, it is like reinventing yourself, “he confessed.

In order to delve into the most specific aspects of Cusk’s work and introduce the audience, Cristoff reviewed his latest titles and concluded that, based on his readings, he understood that the author had maintained an attitude of “digging and inquiring” when faced with a last question. : What is storytelling in the 21st century? The Canadian writer took a moment to reply: “My creation process has little to do with me or with the desire that I may have to say certain things. The appearance of inauthenticity or falsehood motivates me to inquire, to see what is there. ”

At 54, the narrator has several literary lives and plans to continue reinventing herself. She began as an ironic novelist with black comedies starring women such as “Country Life”, she continued with an autobiographical series that made her famous and controversial starting with “A Life’s Work”, in which she told with great honesty how motherhood had impacted on his life. “To be a mother I have to leave the phone unattended, work undone, postpone meetings. To be myself I have to let the baby cry, prevent her hunger, abandon her at night if I want to go out, I must forget her in order to think about other things To be successful as a mother means to fail as an individual, “he wrote in a section that today is more in tune with the confessional spirit of the time but that two decades ago it cost him to be the subject of stark criticism in the United Kingdom.

Later she renewed her autofiction with the triloga “A contraluz”, “Trnsito” and “Prestige” in which she manages to make herself invisible as a narrator; her presence is that of a conductor who gives voice to others to tell their story. “There is a certain boast in that of ‘research to make a book’ in which everything responds to the power of the imagination,” he continued, during the talk with Cristoff, to explain why biographical material can be a valid input for fiction. and with the same effectiveness of any other invention.

Cusk said that writing the trilogue restored his faith in the narrative: “My intention was to give people back the native impulse to tell stories, which is what they have always done. Give them back their voice. Tell what happens to them and make it entertaining for the listener “.

“I always believed that the only way to know something is to experience it, that the most truthful forms of knowledge are personal,” writes the narrator in “Despojos”, where she tells the story of her divorce, not from the breakdown or the reasons behind it. generated, but from the stage that opened afterwards.

The writer, who is usually placed as referent of self-fiction, took advantage of a query by Cristoff about the influence of his classical readings on his writing to dissociate himself from that category. “I always want to place myself in a tradition, but my work is often not understood. I consider myself a classical writer. Over the years, I have nurtured and dialogued with literature and yes, as I progressed, I have distanced myself from the authors I grew up with. They leave my literary home. Now, I find that I learn more through art and music. ”

At the time, the interviewer specifically asked her whether she considered herself a self-fiction writer. “I used the classic format of memories. I needed to find a formula that would represent my experience without necessarily being the one speaking. It doesn’t bother me when they consider me to be Faje’s character or when they assimilate it to self-fiction, but it’s not exactly so “, he maintained and chose to make a clarification:” I write from the material that I have at hand but that does not say anything about who I really am. ”

Cusk also told that he is interested in working with language to account for a certain feminine way of looking at the world. “I feel that the environment in which I work is saturated with male and capitalist ways of seeing the world and that this generates little movement. In literature, sometimes someone does something different but everything remains. For example, if Joyce did not change anything , nobody will be able to do it. In the visual arts, however, an advance implies a movement for all “.

Attentive to the stigma of “unimaginative” that writers who work with the material of reality to shape fiction carry, Cristoff asked Cusk what the role of imagination is for her and how if it is part of her life. Toolbox as a writer: “I use it for the whole writing process, but not an immature version of what we mean by imagination. There is an imagination more like pornography, what one imagines in the head about things and that, on the other hand, I am not so interested “.