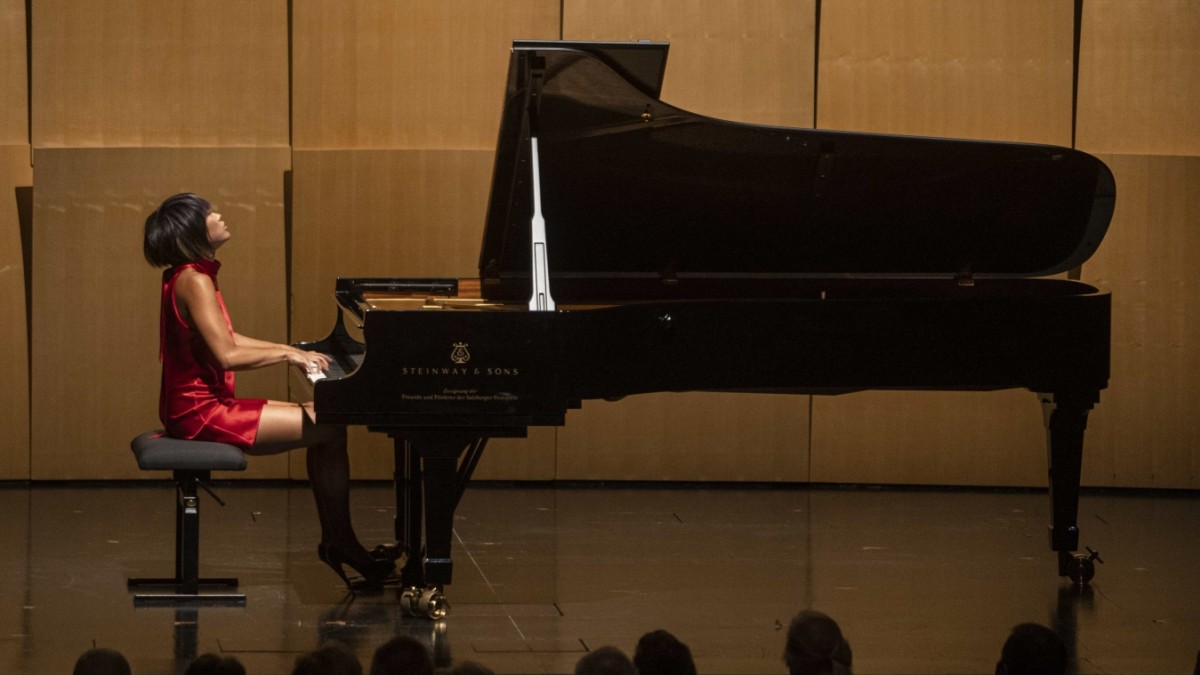 At first it didn’t look as if this stand-in evening at the Salzburg Festival – Evgeny Kissin had canceled – could go beyond the scope of a proper piano recital. Yuja Wang, who studied in China, Canada and the USA and now lives in New York, announced Franz Schubert’s “Love Message” in the piano arrangement by Franz Liszt rather cautiously, almost hesitantly, as if she personally didn’t really believe in it. It is also difficult to imagine that this pianist in an elegant red mini dress and high heels immerses herself in early romantic magic. After the break, she will change into a gold glittering dress. Wang not only has a sense for fashion, but also for appearing as a diva.

She lacks everything maternal, she is always good for a refreshingly self-confident, even a little self-ironic, appearance. She brakes abruptly in front of the piano stool, puts her left hand on the outstretched arm on the grand piano and performs a jerky bow all the way down, before standing upright again a second later, just as quickly sitting down at the grand piano and getting started. One would perhaps expect a cracking virtuoso piece, not necessarily the piano version of a Schubert song. And yet she makes something of her own out of it, one sees Schubert, so to speak, through Liszt’s deep-focus varifocals and Wang’s distanced glacier glasses.

Conversely, it can give Arnold Schönberg’s “Suite for Piano op. 25”, which develops more and more complexly, a supposedly romantic basis, a melodic-harmonic feeling that makes Schönberg’s departure into twelve-tone music appear as a gentle dawn, an optimistic departure into the Extensive, not as a brittle, bossy revolution that shatters everything musically that has existed. Not every pianist can do that, and it was here that one became pricked up how naturally and self-explanatory Wang realized Schönberg’s musical ideas. And the sold-out Salzburg House for Mozart trembled for the first time in a hearty rush of applause. Has Schönberg settled in Salzburg after almost exactly 100 years? Or did the audience sense that much more could be expected from Yuja Wang that evening than sophisticated piano music?

On the one hand, she is a real entertainment talent, sweeping the audience away, even if the music or musical performance alone is not able to do so. When Franz Schubert’s “Hungarian Melody” slips a little in meter and comes very hesitantly, when the passion for the so-called “gypsy minor”, a variant of the minor scale, is completely absent. But, and this is what distinguishes Wang as a great pianist, she can also inspire with pieces that others sound more like compulsory programs or academic boasting. The difficult, serious, great etudes by the contemporary composer György Ligeti, for example. How she not only goes about her work with sheer virtuosity, but also kindles strong feelings and fire where one really hardly suspects her. The last chord in the open pedal fades away with amazing power.

Not necessarily easier: the eccentric late romantic Alexander Scriabin, who on the one hand stands in close tradition to the piano god Chopin, on the other hand draws symbolic abysses and tingling gloom. One can imagine his sound world, if one were to see it, between Alfred Kubin and Francis Bacon, for example. But whatever Yuja Wang hears and sees in Scriabin, there is no such thing as blackness and melancholy. A lot of technically difficult things seem to come easily to her, in any case she plays as if this music were also easily possible, and therein lies a very special melancholy, perhaps even a hint of bitterness. It’s just not that consistently entertaining, expectations or not.

Thank God. Scriabin’s music has not been heard so closely and honestly for a long time. Not since Igor Zhukov, maybe never. Admittedly, honesty is not a serious category of art, it only means that one can hear something in this way and under no circumstances should succumb to the reverse conclusion, which aims from what is heard to what is played, but such sincerity and authenticity are nevertheless core demands of art. Absurd? Certainly, and an artist needs strong nerves to endure this balancing act. Yuja Wang has nerve and she doesn’t fake anything. She also plays her own intellectual game with the folkloric genre paintings by Isaac Albéniz. Suddenly nothing folksy sounds out of it anymore, the homely sound begins to falter. So, maybe that’s the only way this music is tolerable and even interesting.

With the encores, Wang practically organized another half-hour concert. Beginning with Arturo Márquez’s Danzón No.2, she made a smooth transition from Spain to South America, for the sound world of the Mexican composer Márquez, although born almost a century later, is not that far removed from that of the Spaniard Albéniz. Much to the delight of the audience, she then added the virtuoso Carmen Variations by the pianist of the century Vladimir Horowitz, before she demanded a completely different listener expectation with Etude No. 6 by Philip Glass. The reward was the lively, jazzy variation of Mozart’s “Rondo alla turca” by the composing pianists Arcadi Volodos and Fazil Say, and finally Giovanni Sgambati’s adaptation of an aria from Christoph Willibald Gluck’s opera “Orfeo ed Euridice”.

And as if that weren’t enough, the agitated audience clapped their hands on a seventh encore, a virtuoso jazz piece – “Variations” by Nikolai Kapustin – which was melodically and logically designed so far beyond any random improvisation and performed by Yuja Wang seemed very free in the way he made music – like an ingenious improvisation. Actually, most piano music should sound like this. For the pianist Yuja Wang, this evening turned into an unexpected triumph, the audience applauded mostly standing and very excited.