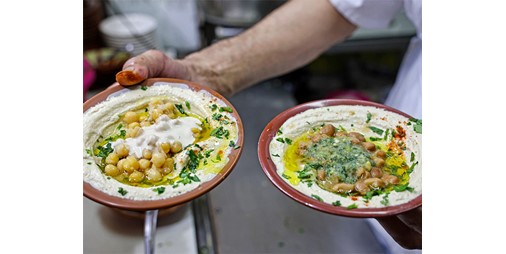 The smell of delicious pastries that comes out of the Taboon oven from one of the alleys of the Old City in occupied East Jerusalem, from which Palestinian chefs travel to the world, carries with them the culture of their delicious food, in which they combine new cooking concepts and adherence to their traditions.

This trend led to the appetite of publishing houses to publish books on Palestinian cuisine.

“I think things are changing for the better, as many Palestinians are keen to promote their foods,” said Palestinian businessman Nassar Odeh, owner of the small “Taboon” restaurant, as the smell of baked goods wafted in the oven.

Odeh has spent the past few months tracking gourmets as they wander in and out of his new restaurant, which he has named after the traditional Taboon clay oven.

Restaurant diners eat pastries such as “meat ba’ajin” or “safiha”, prepared on the Armenian way, which is distinguished by its thin dough that is less thick than the Palestinian one. He remembers the return of the “safiha” when the owner of an Armenian oven was selling it decades ago, and his shop was crowded with crowds at night in the Old City.

Odeh, who serves Palestinian-made beer and wine in the occupied West Bank, said that the Armenian “meat b’ajin” “has become part of the Palestinian food culture.”

“This is very important because this confirms the Palestinian presence and entrepreneurship, we need to be proud of our products,” he added.

– ‘Great start’ – Last year Taboon opened what was once a family souvenir shop, part of a chain of new Palestinian bars, cafes and restaurants that have recently taken up positions in Old Jerusalem.

In addition to these small sites located within the walls of the Old City, larger restaurants have spread in other areas of East Jerusalem that were annexed by Israel, such as the Sheikh Jarrah neighborhood, or further afield in the city of Ramallah.

The restaurant experience ranges from fine dining to fusion menus, blending Palestinian ingredients with European dishes, according to Ezzedine Bukhari, who organizes food tours in Jerusalem and cooking classes.

“It’s a great start. We’re really at the beginning,” Bukhari, who plans to provide advisory services to business owners wanting to revitalize their restaurants, told AFP.

“Everyone was preparing and presenting the same thing, but I was finally starting to see people coming forward and thinking about a new concept and new ideas,” he added.

Bukhari, the founder of Holy Kitchen, pointed out that the Israelis proved more successful than the Palestinians in marketing the local food brand, as they put an image of the Israeli flag over the image of falafel at Tel Aviv airport.

He considered that they are “very good at marketing it,” adding, “We Palestinians leave a gap for the Israelis to talk about our food.”

For Dalia Dabdoub, who runs Taboon and also owns bars in the West Bank cities of Bethlehem and Jericho, “expanding the range of Palestinian dishes and products remains pivotal.”

“We want a change in food attitudes, by introducing more foods that people don’t know,” she said.

She referred to a group of “various dishes of the locally famous al-Batiri eggplant”, whose source is the village of Battir in the Bethlehem Governorate, which is included in the UNESCO World Heritage List and the List of World Heritage in Danger. It will soon appear in the “Tabon” list, while some products are imported from Gaza “.

“I always try to pick tomatoes, when they come from Gaza, they are really red and tastier, while green peppers in Gaza are sharp,” Dabdoub added.

– ‘It’s great’ – The growing interest in Palestinian food abroad is linked to a broader shift away from presenting Eastern or Middle Eastern cuisine as a single set of recipes.

“Right now we’re seeing more focus on the country or the place and the quality of its food. I think it’s great,” said Palestinian chef Sami Al-Tamimi, who grew up in Jerusalem and moved to London more than two decades ago and has a string of cookbooks and restaurants with Israeli business partner Yotam Ottolenghi. .

One thought on “Chefs adding new concepts to Palestinian cuisine”