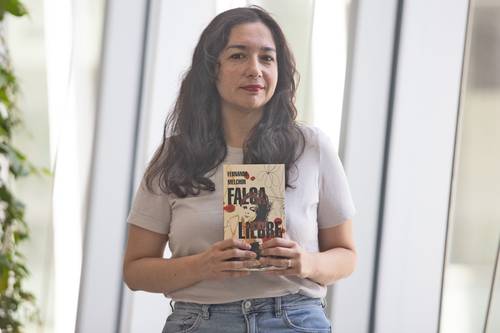 false hare, by Fernanda Melchor, brings the reader to realities you don’t want to see

Fernanda Melchor shares in an interview that her focus on the issue of violence is not so much explaining to the reader why it happens, but rather suggesting elements based on telling a hard story for their senses and formulating their conclusions.Photo Pablo Ramos

The writer Fernanda Melchor maintains that she is interested in proposing stories that put other realities in the minds of readers, so that they live them and say that maybe other people are also sufferingthat perhaps their certainties are not as unequivocal as they thought.

In interview with The Day, the narrator refers that she began to write her novel false hare, recently published by the Random House Literature label, “at a time when Felipe Calderón used to say: ‘Don’t worry, the narcos they are killing each other’, and then, each disappearance, before the mass graves, it was super easy for people to say: ‘Who knows what they were involved in, they must have done something’.

That is a discourse that persists. As a citizen, as an inhabitant of Mexico, not so much as a writer, I have always been interested in narrating these stories to remind readers of these other realities that sometimes we do not want to see or even touch with a stick.

Melchor (Boca del Río, Veracruz, 1982) adds that his attention to the issue of violence It is not so much to explain to the reader why it happens, but to suggest some elements through telling a story that is attractive, powerful and hard for their senses, but at the same time I am interested in them creating their own conclusions and being able to have contact with that other that seems so far away.

He adds: “We live, more so now, through social networks, in these kinds of bubbles where we believe that we are right in everything, that our political and ideological thoughts are correct, that others are wrong. In the political spectrum in which we are. Literature serves to enter the mind of the other and say: ‘Maybe it’s not bad, maybe I’m the one who is bad or society’”.

From victims to victimizers

The novelist refers that since she wrote this text, in 2011 and 2012, “we have built an idea of ​​what a perfect victim is. Unfortunately, it also happens in other areas; For example, now in violence against women, when the victim does not fit that mold, we say: ‘Then she is not a victim.’ In reality, violence is much more complicated, and in it we are all, at some point, perpetrators, and at another, victims.

“I was interested in showing a wide range of violence that happens to a person. There is State violence against the protagonists of the novel. What’s up with these guys? Why doesn’t anyone look after them? How do they fall into these huge holes in the system? Why can’t the system recover everything?

It is also a story about where the DIF, the school and the institutions that used to be support are and now the boys simply fall into the abyss. The ties of community have been lost; So everyone is alone. They are boys who are victims, but at the same time their very condition makes them later become victimizers, perpetrators.

He remembers that in 2010 he was shocked by the news of a 14-year-old boy nicknamed The ponchis, who was in charge of finishing off and dismembering people for a sign. “I wanted to write about the childhoods of these people who would later become narcos, About how the ponchis they came to be Ponchis. in the characters of false hare –originally published in 2013–; you clearly see a couple of them when they arrive The Zetas to Veracruz turned into hit men, with a very easy transition for everything they have lived through.”

The tedium of being a teenager

The translator also mentions that since she was 19 years old she wanted to write this novel and the characters accompanied her and were transformed, but “I always thought that there were two binomials, that of false brothers and that of friends. I must confess, I was greatly influenced by the construction of Guillermo Arriaga in love dogs, These apparently separate histories of similar but different social classes that at some fatal moment come together, collide, have this kind of emergence between them.

“I built it from the form, that everything happened in a single day and each character had a piece. She starts with Andrik at dawn. Pachi in the morning. Zahir at noon, and then Vinicio. This is how they give each other the baton. I came from reading a lot of the authors of the boom, especially to José Donoso, to the first Mario Vargas Llosa, to Manuel Puig. He was deeply involved in the idea that the language of Latin American literature had to be experimental, a risky way.

“There are moments where the characters are walking on the street, looking at the sea or looking in; doing nothing, smoking a cigarette mota in the room with a friend in front of the fan talking about nonsense. I wanted to reproduce what my experience was, growing up in the port of Veracruz, which is a beautiful, terrible, and at the same time extremely boring place: the tedium of being a teenager and having nowhere to go or what to do.”

Melchor affirms that when he began to write he realized that “there was a side of Veracruz that people did not know, that had not been addressed in national literature, that did not go through the carnival, through Los Portales, the chaos, so tourist, the traditional: the little cafe of La Parroquia. There was this other Veracruz that only those of us who live there can see, which makes the light of the port more intense, because it is a very dark side.

“I had no choice: if I was going to write a novel, I had to go to Veracruz and talk about the things that interested me when I was 28 or 29 years old and that I felt were already disappearing. For example, it is a book where there are no cell phones, from before the millennium; basically it’s about what it’s like to be young and already feel rotten, before you’ve even grown up.

Perhaps I was very interested since then in investigating what is inside the minds of men, boys, boys; begin to explore there what for many years has been a mystery to me: why men are the way they are and what their role is in the recent violence in Mexico. It is said that writers all the time talk about the mystery of the feminine. Well, for me the masculine is also a mystery.