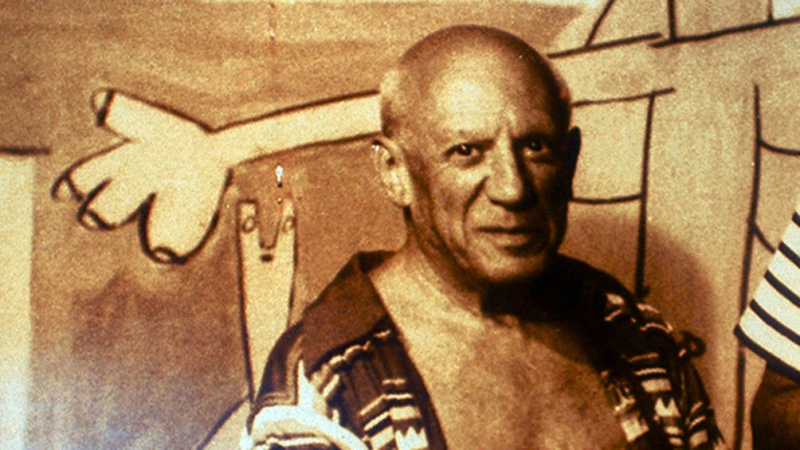 The “picassomana” resurfaced after Sothebys auctioned “Femme au bret rouge-orange” for more than US $ 40,000,000.

With millionaire auctions, donations to evade tax charges, or new discoveries -like a drawing lost almost 100 years ago-, this Monday marks the 140th anniversary of the birth of Pablo Ruiz Picasso, perhaps the best artist of the 20th century, author of the emblematic “Guernica” and whose work continues to garner the interest, admiration and also the controversy of viewers around the world.

But the millionaire figures attributed to the artist born on October 25, 1881 in Malaga (Spain) and died in Mougins (France) in 1973 at the age of 91, were not a pandemic exception or the result of chance: the lot of that work included other 10 that belonged to the collection of the MGM Resort company and in total US $ 108.87 million were raised, which recalls that Picasso continues to be among the most sought-after artists in the world.

It is estimated that the pieces produced by Picasso reach 45,000 works, including ceramics.

Like his life that he rode between Spain and France, a country that he adopted in exile under the Franco regime, the greatest number of works by the artist circulate in these regions, although the truth is that there are pieces everywhere because the artist himself donated a lot of work (with this The Picasso Museum in Barcelona was created at the painter’s wish). Although its production capacity appears to be infinite, it is estimated that the pieces produced by Picasso reach 45,000 works between ceramics, leos, engravings, sculptures and drawings. The scale of production is so impressive that when they reached a tentative number to complete the inventory, Claude, one of the sons, illustrated it: “We would have to rent the Empire State Building to house them all.” In our country, for example, the National Museum of Fine Arts has in its possession some works, such as “Woman in bed”, a cubist-style leo that is currently on display.

The truth is that not all the works suppose the same disputes for the institutions and it is known claim who have been carrying out some movements for years demanding that the “Guernica”, which has been the property of the Spanish State since 1937, be installed in the Basque town that inspired Picasso and not the Reina Sofa in Madrid.

It is also true that during the long process of succession after his death, the French country was left with several works as payment of taxes, since it was a complex legacy to organize, aggravated by the lack of a will. This year something similar happened again when the museum that bears his name in the Sale Palace and that holds more than five thousand pieces, received the donation of nine pieces donated by his daughter Maya to be able to face the very high tax charges.

But Picasso’s universe does not end only in glamorous financial figures or pulls on collections and their properties. The news brings curiosities, as a few days ago when the Metropolitan Museum of Art in New York City was able to locate a drawing of the painter that had been missing for almost 100 years, where he traced the profile of a young man on the back of a postcard. The anecdote of the loss or oblivion is impregnated in the artist’s brand: when in 2012 it became known that the work “Seated Woman with a Red Hat” had remained forgotten for almost half a century in the warehouse of a museum in the United States.

Drawing on the back of a postcard, lost more than 100 years ago.

And if it is not for new discoveries -this year, through X-rays a work was found hidden under the painting “The Crouching Poverty” attributed to his friend the artist Rusiol-, the ones that speak are the actions in a criminal code, as when In 2019, a university student tore the work “Bust of a woman” in half displayed in a gallery after breaking the protective glass -he claimed that it was a “performance” although later he accepted the intentionality of the crime- or the penalty that He received the marriage of Pierre Le Guennec, the artist electrician, and his wife Danielle, who worked 15 years in the residence in the south of France, convicted of the possession of hundreds of works valued between 60 and 100 million euros.

In these 140 years, the Picasso brand has exceeded the limits of its cultural appropriation: for years a model of a car from a renowned brand has been named after him, inspired by the way in which the artist broke with pictorial forms. If it is about strange things, Picasso is also a firm that circulates strongly on the black market with fakes that appear every year, in addition to the complex situations related to rights that led his son Claude to create an administration to organize the issue. Picasso, by hook or by crook, is always present.

In addition to being an innovator in shapes and colors, a promoter of Cubism, Picasso was also a man of social background. as it was captured in the extraordinary synthesis of the first half of the 20th century that he built in the “Guernica” (1937) when denouncing the bombing and exposing the horror of the Spanish Civil War, an emblem that for many also anticipated what would happen in World War II, or in Picasso’s words, “an offensive and defensive instrument of war.”

Bust of a woman (fragment).

Son of the painter and teacher Jos Ruiz Blasco and Mara Picasso, on October 25, 1881, Pablo Ruiz Blasco was born and from an early age he dazzled among his parts. At the age of 13 he painted “The Barefoot Girl”, an embodiment of the inspiration that would mark many of the works starring female figures, those that today are priced in millions of dollars: “Woman in front of the mirror”, “The woman who cries”, “The ladies of Avignon”, Pablo Picasso expresses the most expressed image of the collective imagination about the creative genius: passionate, contradictory, controversial. It is known that he lived as he wanted and where he wanted, in chateux, palaces, at the foot of the hills, by the sea. Each of these places was captured in his works, but perhaps the clearest stages can be recognized with their partners because for each stage Picasso had a woman, a lover or a model muse who cultivated a pictorial period. Eva Gouel to whom he dedicated “I love Eva”; Olga Khokhlova, dancer and his first wife, at that time the artist painted pictures representing mothers and children and painted “The dance”; Marie-Therese Walter, who modeled in several portraits -among them the last millionaire auction- or Dora Maar, to whom he dedicated a portrait that bears her name; Franoise Gilot and his last wife was Jacqueline Roque, who committed suicide years after the painter’s death.

And speaking of women, Picasso is also not without criticism of misogyny. For some years now, many voices that spoke out against their mistreatment of women have come to light, even this year a silent action by students of arre denounced the “lack of political awareness” or gender perspective of the Picasso Museum in Madrid. Barcelona. “All these women are not posing as a simple boring model. They are trapped in the trap of those armchairs like birds locked in a cage. I myself have imprisoned them in that absence of gesture.” That enunciative ferocity, the same that critical groups have recognized in the way in which he disfigured female representations in his works, is one of the phrases that still resonate in the biography of Franoise Gilot, who was his partner and inspired the film “Surviving to Picasso “, starring Anthony Hopkins. His granddaughter Marina also wrote the memoir “My grandfather”, where he makes a stark biography of the painter, whom he has come to define as a “cannibal”.

The artist is not exempt from criticism for misogyny, in relation to the treatment of his “muses”.

Gilot herself left a forceful statement about this, as she told the newspaper La Nacin: “I am the only woman who left Picasso, the only one who did not sacrifice herself to the sacred monster. I am the only one who is still alive to tell about it. Look at what happened to the others. Both Marie-Thrse and Jacqueline committed suicide (the first hanged herself; the second shot herself), Olga went hysterical and almost mad. Dora Maar went mad. ”

140 years after his birth and almost 50 after his death, Picasso is considered one of the most important artists of the 20th century and his insatiable creative work, that still gives surprises and opens new discoveries, It is part of the Parthenon of geniuses, a place that only those who dare to invent something new enter. With indefinite lines that give the sensation of a movement that permeates his work and that emotional capacity that emerges when looking at them, perhaps Picasso is a genius because, as his son Claude said, “he dedicated himself to destroying everything to which we were accustomed and created a new universal vision. ”