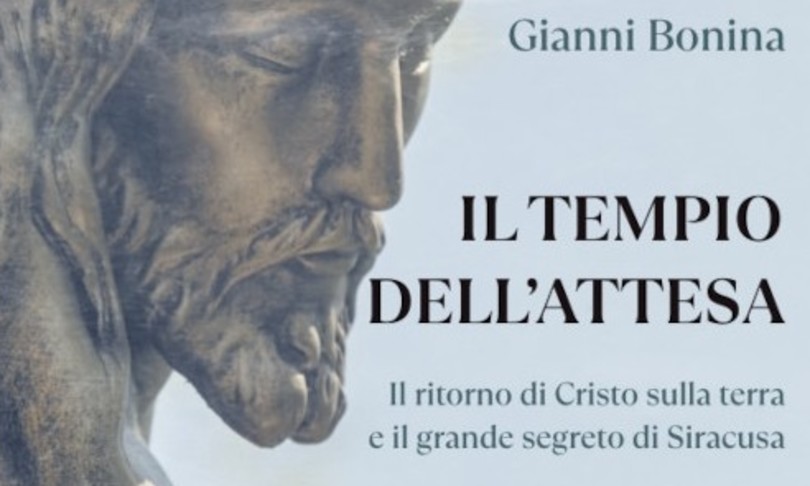 – Open the book and let yourself be led into a sort of magma where history, esotericism, suspense, mystery and faith find space. What you will discover by reading “The temple of waiting”, a novel by Gianni Bonina, Bertani editions, will leave you in doubt whether what has been revealed can actually be true. And if this happens, the writer has achieved his goal.

The story intrigues from the very first pages, the plot is in fact a magnet: a university professor from Catania, reported missing in the 9/11 attack, is recognized by a colleague twelve years later among the tramps of the cathedral of Barcelonato. Man hides a mystery about his disappearance, linked above all to the question of the “parousia”, the return of Christ to earth and the theory of the last days. His colleagues investigate and from Barcelona are directed to Syracuse where they discover the existence of the greatest and most unthinkable secret that the Catholic world can imagine, such as to threaten the survival of the Church.

Therefore, whoever wants to venture into the secrets of Christianity and doctrine, must imagine traveling with thought between Spain and Italy, between Barcelona and Syracuse precisely, living under the spiers of the Sagrada Familia, counting them and recounting them and wondering why number. He must ask himself about the landing of Paul of Tarsus in Syracuse: did it really happen? And he must read what may be behind the diatribe between Peter and Paul, the fisherman and the scholar, the man in charge of founding the Church and the one from whom all Christianity would have originated.

The work lives in the contemporary, he mentions September 11, the two Popes who then, in the novel, for it to be clear, it is a novel, would not be in the imagination other than Peter and Paul. We go on page by page, until we discover in Sicily, the great secret that risks compromising the very existence of Christianity if it were revealed..

“What I wrote is a historical-esoteric novel – explains Gianni Bonina to – set between Barcelona and Syracuse which I consider one of the most beautiful cities in the world. A doctrinaire-wisdom novel that is not very easy to access but requires to be prepared on the knowledge of certain issues such as proto-Christianity and that which occurred after the Council of Jerusalem when Peter and Paul quarreled “.

And from there “From there the history of Christianity was born – continues Bonina – with Paul who decided to evangelize the Gentiles. Paul would have landed in Syracuse, where Marciano was working, sent by Peter. But the novel casts doubt on the possibility that Paul could really have landed and gone around preaching. “

The book refers to the two Popes currently present, Ratzinger and Bergoglio, to explain the fulfillment of a ‘mission’: in order for “Christ to be in the fullness of time, and to be truly the Alpha and Omega”, the Church “must recover its ogirinary spirit between now and 2026 and become ecomenics”.

The great mission, is revealed in the novel, “in which Peter and Paul finally collaborate together, responding to a purpose of God for millennia unfulfilled: Peter with the weapons of popularity and Paul with those of doctrine. The heavyweights of Catholicism together for finish in time to conclude the mission and look, Ratzinger and Bergoglio, the scholar and the popularizer, both live today and cooperate without hindrance “.

“In the esoteric fictional imaginary – adds the author – Bergoglio is Peter. The Church, and we always remain in the context of the novel, in order to have the parousia, must first become ecumenical and must conquer the whole world”.

Then there is the theme of the Mysterium Iniquitatis, the advent of an antichrist who, before succumbing to God, will dominate the world unless an obstacle prevents it. “But the Church is giving way – adds Bonina – it is giving way to Islam, it must therefore evangelize again, a new apostolate is needed. And here Ratzinger is too learned, too cultured to make himself understood by everyone. So Bergoglio arrives. it’s more communicative “.

Two popes who are really there, so different indeed: “For me”, explains the author, “looking at current events, Ratzinger continues to greatly influence the Church. Peter and Paul were in opposition but perhaps Bergoglio and Ratzinger are too. And I don’t think they are in perfect harmony. They are on different positions on many things. The Church, however, is trying to proselytize, to recover. Even if I do not believe that this Pope, Bergoglio I mean, will go down in history. He makes very rash openings. , is dividing the Church. The traditional Catholic remains disoriented. He cannot accept Bergoglio’s ideas. And the journeys of Francis in the heart of cultures very distant from the Catholic one, serve the purpose of going to carry the word as if it were the work of a missionary. The truth is that the Church is losing sarcedoti and faithful but without this process, it cannot effect revelation. “

Is Bergoglio the obstacle that opposes the iniquitous? So many mysteries, the result of studies and reflections that are released in the dialogues of the various characters. We cannot spoil the book too much, even if those who are intrigued by the issues addressed, understand that the secret probably has to do with the spread of Christianity and with Syracuse where the apostle Peter sent Marcian to evangelize successfully to the point that he became the first bishop of Europe making the city the first Christian center of the West.

“Syracuse is an ancient city – concludes the writer – and as such full of mysteries. A treasure chest of mysteries. A film about this novel? Well, in my opinion, it can be done. It is an esoteric thriller after all”.