Is food cultural property? A debate that crosses practices and heritage 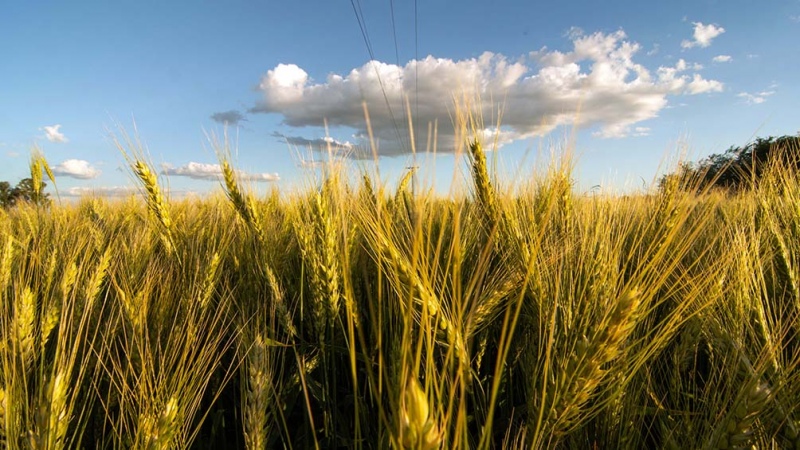 A question arises when it comes to qualifying wheat, meat and corn as cultural goods. (Photo: Carlos Brigo)

In a world in an environmental and food crisis with difficulties in accessing basic foods dominated by the logic of the market, are food cultural goods, part of social identity and even living heritage? It is currently a place based on recent initiatives that seek to install as part of the cultural heritage some components of the gastronomy, such as the grape harvest festival, which due to their social and collective importance are constituted in expressions of the ways of inhabiting and thinking about society .

The use of the term “cultural asset” for foods such as meat, wheat and corn raised during the presentation of the law that creates the Regime for the Promotion of Agroindustrial Development -in Government House-, by the new Minister of Agriculture, Livestock and Fisheries, Julin Domnguez, It was installed as part of the debate.

“Agricultural production is an indissoluble part of our national identity. Wheat, corn and meat are considered Argentine cultural assets and are at the center of our traditions,” Domnguez said at the end of September and on those days, in a program On television, he once again stated: “There is no country in the world that has a cultural asset available for the market to handle” and “it is important to understand that Argentine consumption is a superior asset.”

The art of the Neapolitan “pizzaioli” as a culinary practice, the Mediterranean or French gastronomy as intangible heritage inscribed on the Representative list of the Intangible Cultural Heritage of Humanity of Unesco, are examples of the relevant place that some countries assign to their assets culinary.

But in this list there are also weavings, manufacture of ceramics or glass drops, traditional beekeeping in trees, the art of watchmaking, oral poetry such as pantun, the culture of the Finnish sauna, yoga, as well as the knowledge and practice of ancestral music, mountaineering or the art of climbing peaks, partying in Cuba or the camel race of the Bedouins, which are part of the numerous list of the international entity.

The tango, the chamam and the porteo filet are inscribed on the Unesco Representative List of the Intangible Cultural Heritage of Humanity (Photo: Camila Godoy)

In it, Argentina has registered the tango that it shares with Uruguay (2009), the Buenos Aires porteo filet (2015) and the Chamam in 2020, and from Mendoza it is promoted to join the National Harvest Festival.

“Food is having a considerable importance in relation to intangible heritage,” explained the anthropologist Mnica Lacarrieu to Tlam and highlights that this trend is reflected in the different academic events in which culture and agriculture are considered linked to intangible heritage. “More and more there is an intention to put into play those processes linked to the land, to production, because intangible heritage will even contribute to solving social, natural, environmental, well-being, and sustainable development problems, inclusive”.

“For example, in Mexico there was for many years an interest in introducing Mexican food on UNESCO’s lists, and it was not possible to solve it because Mexican food is wide, diverse, regional, and not everyone eats the same. In the end it was resolved legitimizing the cooks of Michoacn “, recalled the specialist, who pointed out that in the first years after the Convention for the Safeguarding of the Intangible Cultural Heritage of 2003, the Mediterranean diet was registered with Unesco. involved several countries.

However, he maintains that there is a review of these presentations “because it is impossible to think about the elements without the subjects, social groups that are linked to these natural and food resources.”

Returning to the local, in the case of corn and wheat, he indicated that they are food, productive, natural and social resources that have to do with the population’s diet: “Every element, any manifestation or expression linked to heritage in general, but to intangible heritage in particular, has to do with identity. When some type of demonstration is legitimate, it is because the social groups are in force and feel identified, and that is why they give it continuity. They feel identified with that cultural expression, from which they validate, represent and define themselves “.

Therefore, the question of whether meat, wheat and corn can be validated “in terms of a constitutive part of our identity” in his opinion “They could be, but I will not take them as a cultural asset, because it is falling into the reified and objectivist or productivist vision of the product without thinking about the processes. Corn is a natural, nutritional and social resource for a good part of Latin American societies. ”

What Lacarrieu proposes is to “look at communities, social groups” and not take “the elements individually, much less as a cultural asset” -a notion that is born with the historical, architectural, material heritage-, nor as an element or manifestation of the national people, so as not to enter into a dispute with social groups such as vegans and vegetarians, for example, which “will be quite conflictive at this time.”

“Heritage in general is a field of dispute, there is no doubt about it” but it should not lead to strengthening disputes but rather “with heritage, consensus, agreement and social resonance are sought. That is, the population feels identified. , represented. Not the entire population. That would be impossible. But it is a majority part “, clarified the researcher from Conicet.

Another interesting piece of information provided by the specialist was when “French cuisine was legitimized and that was a very bad example”, while in the case of Colombia the proposal of Colombian cuisine was not considered because it was “highly criticized and even questioned. by groups of experts and specialists “with the proposition that” that food is not eaten by everyone “and because” that look does not take into account the activation of Colombian cuisine, what the poor eat or health issues or what it happens with certain regions. ”

For this reason, in reference to food, “it must be strengthened, argued and based on the productive processes linked to family, rural, peasant and other issues and then depending on what happens to those populations and elements, as far as they are identified and to where they are of well-being and sustainable development “.

Then, corn, wheat and meat cultural good, yes not? For all that has been said, for the anthropologist should not be declared that way, in any case “s as manifestations, expressions or part of social processes that would lead to the idea of ​​the element in terms of the intangible cultural heritage, but for that we would have to work with the communities, with the social groups that are linked and there to define very well the famous concept of community and who they are “.

The anthropologist and researcher at Conicet, Mnica Lacarrieu, has doubts about whether the Harvest Festival “can be considered intangible heritage, because it borders on the cultural industry.”

In the case of Harvest Festival, for which it was consulted at the time, I did not consider her to be a viable candidate and I anticipated that probably discussions will be held when it arrives at UNESCO about “if it can be considered intangible heritage, because it borders on the cultural industry and at this point It is not a party that is organized in a community way, but is closely linked to the show“.

“The intangible heritage has been trying from its origin to remain outside the spectacular and spectacularized “, which does not disable some parties such as carnivals “which are spectacles in themselves that have been registered”, clarify.

But the truth is that “no festival is self-explanatory, and that is the idea of ​​thinking of the element as a cultural asset regardless of social processes, because the grape harvest or the festival cannot be explained without considering the productive or social processes to which it belongs. from which you get to that moment, “he said and added,” many things happen previously that have nothing to do with the party itself, what makes the party finally unfold. ”

This is similar to the case of corn, wheat and meat, where agricultural cycles contribute to the development of certain social practices in relation to those natural, productive, social resources, which must be considered. This reveals that “a product cannot be declared and registered outside the communities, social groups or individuals that are linked to those resources.”

When a file is submitted for registration in Unesco or for a “declaration” at the national level, the axis is usually placed on the product, the good, or in the case of intangible heritage, on the element, such as the vintage, the quartet. cordobs and “although they do not have the characteristics of a cultural asset, a logic of material heritage is used, when what is important in intangible heritage are the social processes and the contexts in which they occur”, concluded the anthropologist.