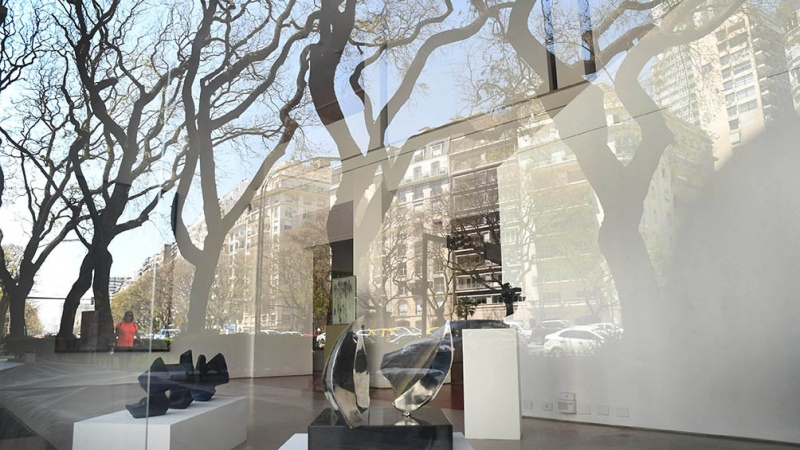 The gallery turns 20 and celebrates it by offering its space to 10 creators (Photo: Pablo Aelli).

With works by artists such as Alicia Penalba, Nora Iniesta, Marcia Schvartz, Nushi Muntaabski, Karina El Azem, Mnica Milln and a newcomer Brbara Diez, among others, the Maman Fine Art gallery continues its celebration for the 20th anniversary of its foundation with the exhibition “Manos a las Obras”, which puts various works and aesthetics in dialogue and can be seen until December.

“Hands on work: 10 artists” escapes from the traditional approach of the female artist to draw a dialogue between works that are based, at least some of them, on artisan work. “The intention was not to make a sample of ten female artists because it seems to me that the matter is demod, but it is indirectly crossed by a look at the genre of the work,” curator Patricia Pacino tells Tlam.

According to Pacino, what links these ten creators is “humor, a subtle irony, which we see in almost all of them, and the use of certain techniques that go against the grain of what would have to be the greatest art”.

The textiles of Mnica Milln, a native of Misiones, are a clear example of the artisan imprint, as well as those of Karina El Azem or the work with venecitas by Nushi Muntaabski.

Leo or acrylic paintings, textile art, photos, collages and sculptures of different materials make up a journey that begins with a painting by Schvartz (“Ojo de agua”, 1993), a textile by Milln and sculptural sketches by Penalba (1913-1982 ): three polychrome pieces of refractory material carried by the artist on a large scale for the Kassel III Documentary in 1964 under the title “Great Sculpture-game”, among others.

It is an exhibition with a group of “powerful and unique poetry”, as described by Pacino, co-founder and director of the gallery that celebrates its twentieth anniversary, and has as the “finishing touch” of the year this particular second exhibition with a close opening to the glamorous ones in the galley.

The exhibition curated by the wife of Argentine dealer and gallery owner Daniel Maman is based on a selection of works by herself, including Catalina Chervin, Mnica Van Asperen and Cynthia Cohen.

Most of the artists have participated at some point with an exhibition or are represented by the gallery, such as Cohen and Muntaabski who joined in 2017.

In this way, Maman and Pacino celebrate the first 20 years of the gallery with this second exhibition – the first was in August with a new Singular Collective edition – at a time of almost normal activity after sanitary restrictions due to the pandemic.

Among the exhibited works are three by Muntaabski, on loan from Amalia Amoedo’s collection: “Rueda” presented at arteBA with a performance of Sleeping Beauty in 2012, “Manguera” (literally a coiled hose), and a strange and compelling sculpture called “The Rooster and the Fox” from 2010, which refers to fables or popular tales, all pieces worked with venecitas (Venetian mosaic).

Milln exhibits three tapestries, one with the suggestive name of “The tremulous flight of butterflies between the whining flowers and the velvety leaves” (2016), which combines drawing, embroidery and charcoal and a more recent work such as “Submissive flowers in a vase” , an embroidery on a blanket with the technique of patchwork, collage and crocheting.

The artist, who will soon participate in an exhibition at the Modern Museum of Buenos Aires together with Adriana Bustos and Claudia del Ro, “combines dyed fabrics, small tablecloths, colored ribbons or the Anduti lace that other hands wove, and since 2002 she works in Paraguay with a town of weavers, and in this way keeps tradition alive and combines creation, craftsmanship and plastic language, “explains Pacino.

With an aesthetic that is different from the previous ones, El Azem once again shows “Precaucin” -which it already exhibited in the gallery in 2003- and more recent works worked from patterns in digitized beads that make up an abstract composition printed and that revolve around the reality and the simulacrum that the artist exemplifies with the expression “all that glitters is not gold”, but maintaining the prominence of the texture of the bead or the ammunition (and the bullet cartridges of different calibers, as in a table of 2000 including variants).

The creator explores the scope of the ornamental tradition and design, and among her themes she addresses violence as with “Caution”, where she recreates with black and white pearls an alert sign to undocumented migrants who want to cross the border from Tijuana to California (United States), which iconizes a family that runs for their lives.

Nora Iniesta, who works from the conceptual point of view with assemblages and one of its characteristics is the use of the patriotic colors of blue and white, exhibits “Requiem for a feather duster” (1987), a wooden box that holds a plucked feather duster and on the lid , a cove that accompanies, and that I presented for the woman’s day at the Recoleta Cultural Center. For Pacino this work “advances the development of his conceptual (minimalist) poetics where appropriation, subtle irony, playfulness and formal rigor characterize it”.

“I take everyday things and they are transformed into works, things are there and you always have to look from the inside out,” says Iniesta. But more recent works are also exhibited such as “The rest” (2021), a sketch for a monument or “Happiness” (2020): a small wooden structure, with two figures, a couple, with a cockade, “is a Marriage, with clay figures, is a construction that is diluted “, he explains, and” Lo inalcanzable “(2005) with three portraits of a girl trapped watching television,” in a system from which she cannot get out. ”

Cohen, with large works, between painting and collage that take up the aesthetics of pop with an imaginary of objects of “a vivid and joyful realism that borders on the artificial”. And for his part, Chervin, with a gray and white diptych from the Street art series (2012-2019) and a resin work from the stones series (20120), “composes subtle, complex and poetic images” and jumps to the three-dimensional with his works with layers of drawings trapped by polyester resin.

In the case of Van Asperen with “Vasos comunicantes” (2013), the recording in a photo of an action that places two people on their backs, with a row of vessels that join both vertebral columns related to the issue of femicides; or the striking “Sound Equidistance” (2016), created with mirrors, tubular shapes made with the blown glass technique and light blue neon.

And finally, Diez with its series of collages that began during the pandemic in a self-taught way -as Rmulo Macci, justifies Pacino-, was developing these interventions on reproductions of works of art based on Maman’s invitation that encouraged her to exhibit by first time. The practice of collage is related to his childhood and family environment.

“The sample presents, the festive, the happiness, the playful, the game, and also the daring because they handle (the artists) an art that could be considered as textile art, the artisan, but that they reformulate in a way that has a totally incredible speech, “says the curator about the exhibition.

Specializing in modern and contemporary art, the gallery was inaugurated in October 2001 with an exhibition by Macci, “Paintings in Time”, in parallel with the neighboring Museum of Latin American Art of Buenos Aires (Malba), and opened another in 2013 in Miami, located in the heart of the Design District, from where it promotes modern and contemporary Latin American art in a more vibrant market than the local one.

This gallery located on Avenida del Libertador is the third one undertaken by Maman in his 45 years of experience in the art market.

The exhibition can be visited at Avenida del Libertador 2475 (CABA), from Monday to Friday from 11 a.m. to 7 p.m. by appointment, until December 23 (https://mamanfineart.com.ar/).