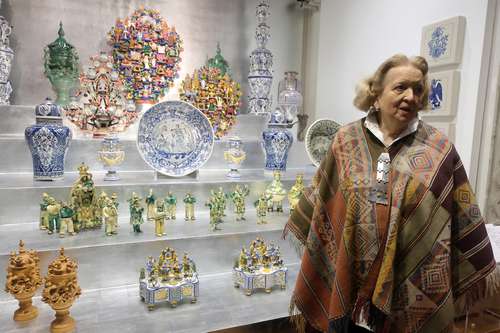 Exposure Citibanamex Cultural Promotion 50 years: stellar programs It will be open to the public for free from August 18 until the end of October 2022. In the image, the director of Fomento Cultural Citibanamex, Cándida Fernández de Calderón during a tour of this exhibition.Photo Jose Antonio Lopez

Fomento Cultural Citibanamex (FCC) will prepare a work program for the next two or three years for the next owners of the financial consortium, with projects that they will fall in lovesaid with enthusiasm Cándida Fernández de Calderón, director of that instance.

The promoter presented yesterday at the Palacio de Iturbide an exhibition that is a kind of cash cut of half a century of work by the institution that manages, disseminates and preserves the valuable artistic heritage, now owned by the American Citigroup, which has put up for sale Banamex brand.

In the sample there is a count not only of the 600 exhibitions that in five decades were visited by just over 48 million people, but there is also a selection of the 281 books published, as well as the stellar pieces of the popular art collection that FCC protects, works of art made by national artisans and others from 21 Latin American countries.

In addition, through the projection of videos, the academic work of the bank is alluded to, which has organized colloquiums, master conferences, round tables, workshops and concerts, without missing the mention of the 64 restoration and conservation projects of the archaeological and historical heritage that Citibanamex has financed (viceregal buildings, organs, cataloging of libraries and opening of new site museums).

The best cover letter from Fomento Cultural Citibanamex it is the work and its contributions, made with the greatest possible professionalism and always with a humanistic vocationreiterated Fernández de Calderón, who was also in charge of the curatorship and the museographic project of the exhibition Citibanamex Cultural Development, 50 years: Stellar programs.

At a press conference, he trusted that, during the sale process, Citigroup knows how to choose the best alternative that guarantees the continuity of FCC’s work, since it is an area which is part of the bank’s DNA. Although economically we are not a constituent part of the group’s assets, we are a part of its heart.

He explained that Fomento Cultural only has the popular art collection. The other artistic assets: colonial buildings, painting collections and other sets such as numismatic pieces and documentaries “are part of Citibanamex’s assets, they go in the bank’s own package and their value is several million dollars; I don’t have the exact figure right now.

“In general, the positive value that we have placed on the Banamex brand is very reasonable. Even leaving us with passion and tastes, the cost of the collection is very reasonable and proportionally very advantageous; I don’t think this point is going to generate an acceptance problem, even in terms of image.

That is why I believe that if we have the opportunity for (the bank’s potential buyers) to approach the projects, they will make the new owners fall in love. We will have to wait a bit.

Although it was in 1971 when Fomento Cultural Banamex was established as a non-profit organization, with the mission of promoting investment in cultural development, as well as promoting, preserving and disseminating Mexican cultureit was until the restoration of the Iturbide Palace, the following year, when they installed their operational headquarters there.

In 1992, Cándida Fernández de Calderón was appointed director of that instance and the strengthening of traveling exhibitions throughout the country began. In 2001, Banamex joined Citigroup and in 2002 the Iturbide Palace underwent a two-year restoration process.

FCC’s half century was completed last year, but due to the pandemic, the big celebration was postponed until now. However, Fomento Cultural did not stop working and was able to present 18 national and international exhibitions in 2021, attended by 1.6 million visitors, the directors reported.

It has been half a century of work, continued Cándida Fernández, “first with a head, because there is a cultural management strategy behind our work; with lungs, because we have the support of the institution, the Citibanamex bank, and that is no small thing, and with heart, because we have the conviction, both of the bosses, my own and that of the team that makes up Fomento, of the benefits of culture and its benefit for the full development of society.

“The exhibition Citibanamex Cultural Development, 50 years: Stellar programs It is not only an exercise in transparency and accountability, but it also offers an overview of our cultural activities”, pointed out the curator, who highlighted the relevance of the immersive room dedicated to baroque art as it is our great contribution to the world; We have practically taken our collection to all international museums, we are a reference on the subject.

The sample will be open to the public, free of charge, from this Thursday and until October from 10 a.m. to 7 p.m. In the Palacio de Iturbide/Palacio de la Cultura Citibanamex (Madero 17, Centro Histórico) the exhibition is also presented Jewels of the Pinacoteca de La Profesa: Two congregations and a collection.