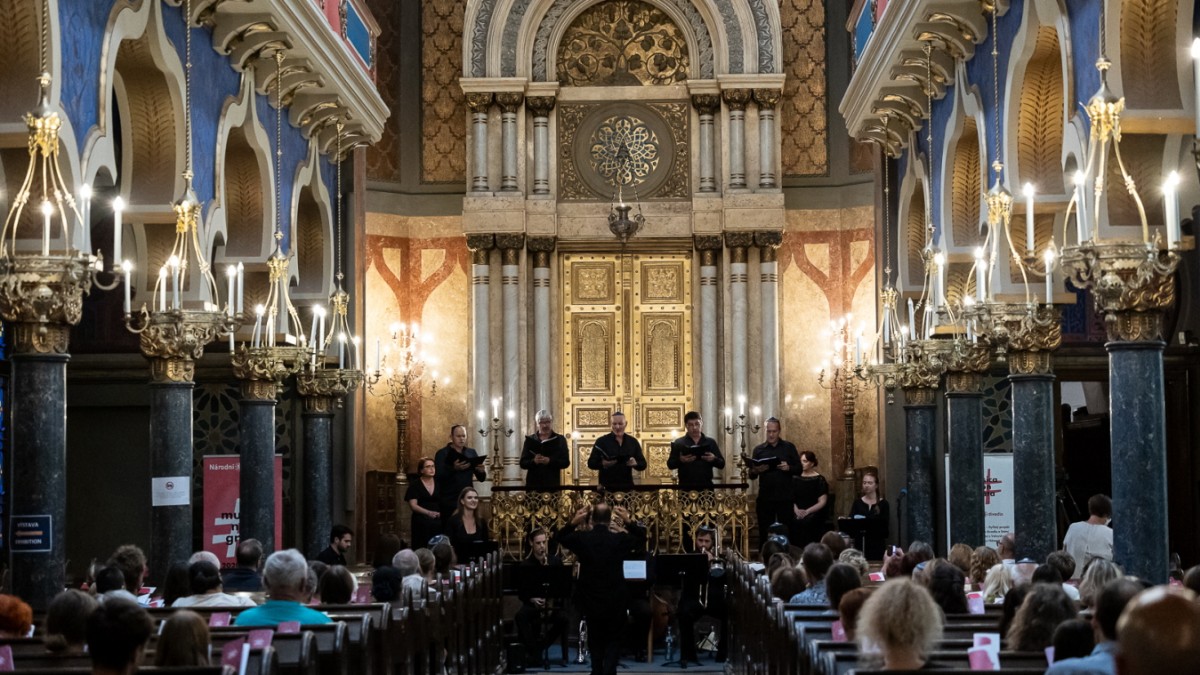 The space where the open dress rehearsal is held is peculiar enough. a newly refurbished, Neoclassical hall. lovely. This is not a palace; rather, it is a hall similar to those found in many manorial palaces. It is the palace that was constructed about 230 years ago by the master craftsman who oversaw the construction of the Theresienstadt castle. The man, whose name was Wieser, seemed to understand both his own importance and that of the enormous castle structure, which was seen as ideal at the time. The building housed the SS casino from 1941 to 1945, and the Czech army officers’ casino from the end of the war until 1990. The jazz oratorio “HMS Royal Oak” by Erwin Schulhoff is now being performed by students from the Cologne University of Music. throughout the formerly-occupied detention camp.

The performance is the result of the “Terezn Music Academy,” a summer school for students that brings together a large number of people, the majority of whom are in concert: the German ambassador Andreas Künne; Per Boye Hansen, the Prague National Opera’s director, whose home the project “Musica non grata” is located; Markus Klimmer, who is acquainted with Frank-Walter Steinmeier and has a knack for bringing people together; Tomá Kraus, Along with them are residents of the neighborhood and musicology students from Brno who attended lectures that were formerly held here.

All of them are listening to music by a composer who was born in Prague in 1894, studied in Cologne, turned communist, obtained Soviet citizenship, was detained in Prague just before leaving the nation, and passed away from tuberculosis in the Wülzburg internment camp in 1942. Although Schulhoff himself did not spend time in the Theresienstadt concentration camp, he is a member of the generation of German-Czech-Jewish composers who were held here by the Nazis and endured horrendous living conditions – the fortress was originally designed to hold 7,000 people; the Nazis crammed here up to 58000 people at once (there were 150000 in total) – while still producing music. Nazis planned to utilize Theresienstadt as a template for their concentration camp, so they first demanded it covertly. That was successful; in the summer of 1944, a Red Cross commission fell for the con. As soon as this was gone, the actors in the heinous production of a city where Jews may live were sent to Auschwitz where they were executed. Similar to individuals who were forced to participate in the propaganda movie that was dreadfully well-known under the (probable) title “The Führer grants the Jews a city.”

You reside in an old concentration camp, therefore the past is never far away.

The Theresienstadt symposium of Brno students is held in the attic where Hans Krása’s children’s opera “Brundibár” was played, created by Viktor Ullmann, Gideon Klein, Pavel Haas, and Hans Krása. Because you reside in a former concentration camp, the past is always present. SS greats lived in the mansion that is now the hotel. The daughter of Tomá Kraus, who plays a prominent role in the academy’s administration and who also resides in this hotel, claims that she is unable to sleep here because she constantly hears ghosts from the past. Around 600 people call this place home, and for them, the five years of Nazi tyranny are only one historical layer (in 1940, a terrible Gestapo prison was built inside the Small Fortress). The innkeeper uses her translation software to discuss socialism, Maria Theresa (to whom the citadel was formerly devoted), and how Terezn has been a typical town since 1992. a strange, almost lifeless, gloomy city.

Schulhoff and the aforementioned composers hope to revive interest in the “Musica non grata” initiative. In this regard, a few things have already happened. Famous composers from the inter-war period, such as Alexander Zemlinsky and the very popular Erich Wolfgang Korngold in Hollywood, who forged their own path out of late romanticism and were not influenced by Schönberg and his followers, have already gone through at least a partial rebirth. But there is still a lot to learn. They were killed by the Nazis first, then their works were not performed in post-war Germany because they did not follow the avant-rules garde’s in Donaueschingen or Darmstadt, and in the Czech Republic they were regarded as dead German composers, which you didn’t want to hear. Czech television is now airing the summer academy’s festive finale concert during prime time, which is held in Prague’s Jerusalem Synagogue.

The most insane of those now forgotten was Schulhoff.

The German Foreign Office will contribute one million euros annually for the duration of the four-year “Musica non grata” project. The National Theater in Prague is using this money to realize projects like Schulhoff’s opera “Flammen” in June of this year. It also funds the summer academy. The intention is to rescue the composers and their compositions from obscurity. The weirdest of them all was Schulhoff.

He created a composition using solely breaks, decades before John Cage. He put the Communist Manifesto or a female orgasm to music in a cantata. He also wrote “The Royal Oak.” Their narrative is old. The British battleship was launched in 1916, and on a voyage in 1928, an amazing occurrence occurred: there was a disagreement among the officers on the music that should be played on board. The disagreement between those who preferred jazz and the admiral, who detested music, erupted until it reached British courts, where the officers were censured. The Royal Oak was sunk by the German submarine U 47 in 1939.

According to their style, Erwin Schulhoff and librettist Otto Rombach dramatized the narrative, incited the crew to rebel, emphasized the admiral’s disapproval, and eventually produced a persuasive case for the new that the populace desired. The roughly 40-minute play had its radio premiere in Frankfurt in 1931, and a year later it was performed on stage in Breslau. The original version of “Royal Oak,” written for a sizable jazz orchestra, was recorded by the Ebony Band in 2009. Otherwise, very few performances exist. Perhaps it’s also because playing it is so challenging. Frank Engel composed a chamber arrangement for the Terezn Academy that includes six musicians, one speaking voice, one singing voice, and a tiny sailor choir that is provided by the Prague National Opera.

Apart from Fabio Cimpeanu, who is studying jazz drums, all of the other musicians are Cologne University students who are unlikely to have ever played anything similar. Schulhoff writes authentic jazz, after all. Not the lovely jazz-like as-if in the Weill vein, of which one is only reminded here in the declamatory moments. Under Werner Dickel’s guidance, the students discover that Schulhoff nonchalantly strolls by. There is tango and waltz, but what a waltz! It is complicated, occasionally bordering on polyrhythmic. One might be in the Duke Ellington spirit. Additionally, the structure has undergone a permanent alteration. Schulhoff is capable of writing songs and even chorales (thus, it may be considered a “oratorio” but is actually more of a cantata), but he thinks in larger portions and constructs larger blocks, sometimes entirely instrumentally.

It’s music that you’ve never heard before, in any case. The entire project is a huge exclamation point, but it’s merely the beginning. beginning of a potential permanent, organized academy as a Czech-German partnership. Along with the “Royal Oak,” compositions by composers who were forced to dwell in Theresienstadt were also performed this year thanks to the involvement of the Terezn Composers’ Institute. and were then killed. However, their music has life.