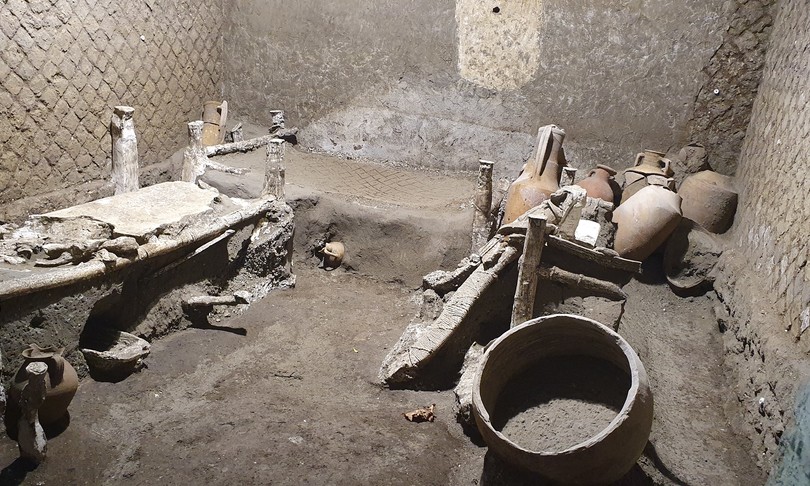 In the villa he already has returned to the world the parade float and for religious rites with very fine silver and bronze decorations, unique in the world because in a perfect state of conservation and escaped the grave robbers who dug tunnels around the environment in which it was, perhaps preparing to take it away, the slave room.

In this villa, sealed by the ash, the result of the Plinian eruption of Vesuvius in 79 AD, in the servile district, it had also come to light in 2018 a stable with the remains of 3 equine, of one of which it was possible to make the cast.

The environment intended for cleaning and maintenance of the villa, and also probably to take care of the wagon and animals, according to the archaeologists, it offers a very rare insight into the daily reality of those who lived there, thanks to the exceptional state of conservation of the environment and the possibility of making plaster casts of beds and other objects in perishable materials that have left their mark precisely in the fine material that covered the ancient structures.

The discovery took place not far from the portico where the cart was discovered last January, now at the center of consolidation and restoration interventions. The room presents three wooden cots and a crate, also wooden, containing metal and fabric objects that seem to be part of the horses’ harness. Also, leaning on one of the beds, he was found a rudder of a chariot, of which a cast was made.

The beds, in this 16 square meter room, consist of a few roughly worked wooden planks which could be assembled according to the height of those who had to use them. In fact, two have a length of approximately 1.70 meters, while a bed it measures just 1.40 meters, so it could be a boy or a child. The bed base is made up of ropes whose footprints are partially legible in the ash. Above these, cloth covers had been placed, which also reached us as a footprint in the ground and returned through casts.

Under the cots there were few personal items, including amphorae that perhaps served as drawers, ceramic jugs and a chamber pot.The room was lit by a small window at the top and had no wall decorations. In addition to serving as a dormitory for a group of slaves, perhaps a family as the smaller camp bed would suggest, the environment also served as a storage room, as evidenced by eight amphorae positioned in specially left free corners.

Also in this environment, part of the archaeological heritage has been lost due to the tunnels dug by grave robbers who, throughout the villa, have created a total damage that has been estimated at almost two million euros..

Pompeii model of study unique in the world

“Once again an excavation born from the need to protect and safeguard the archaeological heritage, thanks to a fruitful collaboration with the Torre Annunziata prosecutor headed by Nunzio Fragliasso, allows us to add a further step to the knowledge of the ancient world“, points out Massimo Osanna, general manager of the Museums of the Mic. “Pompeii is proof that when Italy believes in itself and works as a team, it achieves extraordinary goals admired all over the world. This new incredible discovery in Pompeii, a unique study model in the world, shows that today the archaeological site has become not only one of the most sought-after destinations in the world, but also a place where research is carried out and new technologies are tested “, reiterates the Minister of Culture, Dario Franceschini.