Brittany posed for pictures with her handsome boys 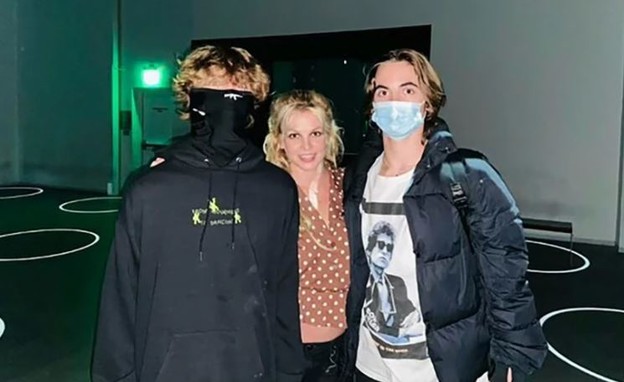 With another moment to completely free herself from her father’s guardianship, Britney Spears went out last week with her teenage children to the show – and uploaded shared photos with them, which she managed to delete immediately after. “I don’t go out much, so I was quite excited,” the singer wrote

Last Wednesday, Britney Spears arrived with her children at the Van Gogh show in Los Angeles – and they enjoyed a private tour of the place. The 39-year-old pop star spent time at the show with 16-year-old Sean Preston and 15-year-old Jayden James, sons of her ex-partner, dancer Kevin Federline.

“Me and my boys last night,” Brittany wrote on Thursday in a post that has since been deleted on Instagram, alongside photos she posted while standing between her two teenage sons – Sean Preston (right) and Jayden James (left). Britney also shared a two-minute video from their visit to an exhibition that includes nearly 50,000 square feet of exhibits and projections that revive Vincent van Gogh’s works.

“My kids and I went to the amazing show, it was so cool,” Brittany wrote. “Obviously I don’t go out much, so I was pretty excited.” She further wrote: “I went with the people who will love me anyway, no matter how stupid I behaved when I opened my mouth”, and concluded the post by saying “Do not worry, it was VIP so no one else was there. We really got to play”.

Spears, who testified in court last June that she was “traumatized” and “depressed” because of the “abusive” conservatism she has been in since February 2008, is recovering recently after her father was suspended from guardianship in September for a fortune of $ 60 million. The next hearing in Spears and her father’s case is set for Nov. 12 – and may end the restrictive arrangement.