A century after Tutankhamun, Egyptians request to reassess their contribution in explorations 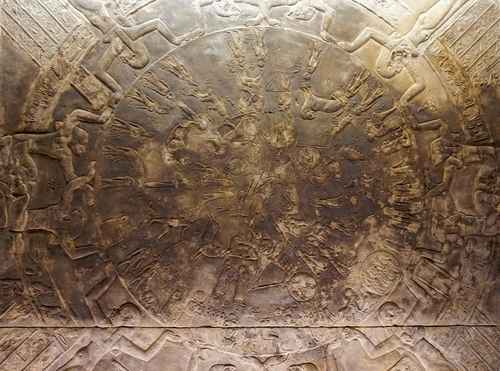 A century after Tutankhamun, Egyptians request to reassess their contribution in explorations

View of the Dendera Zodiac, a celestial map dating from around 50 BC, which was removed from the Temple of Hathor at Qena, in southern Egypt, by order of the French official Sebastien Louis Saulnier in 1820, and which is suspended in a ceiling of the Louvre Museum in Paris from 1922.Afp Foto Photo

Qurna. In the iconic photo, the British Howard Carter inspects the sarcophagus of Tutankhamun and an Egyptian remains in the shadow.

That image from the beginning of the 20th century illustrates very well what two centuries of Egyptology were; according to the experts: on the one hand, the western savior who seems to discover the treasures alone, on the other, the Egyptians, absent in the story of the revelation of the secrets of the pharaohs.

When the world celebrates the bicentenary of the deciphering of the Rosetta stone by the Frenchman Jean-François Champollion and the centenary of the discovery of the tomb of the child-pharaoh Tutankhamun by Carter, in Egypt more and more voices ask that the contribution of the own Egyptians in these explorations, a way to reappropriate their history and the preservation of their country’s heritage or the restitution of treasures considered stolen by Westerners.

The Egyptians who excavated they did all the workbut were forgottenregrets Abdel Hamid Daramali, head of the excavation in Qurna (south), where he says that he was born on the tomb of a scribe.

It’s like no one has ever tried to understand ancient Egypt before. de Champollion in 1822, adds researcher Heba Abdel Gawad, a specialist in Egyptian heritage.

In the famous photo, the unnamed Egyptian could be Hussein Abu Awad or Hussein Ahmed SaidRiggs speculates. These two men were, along with Ahmed Gerigar and Gad Hasan, mainstays of Carter’s team for nearly a decade, but no expert today can name the faces in the photos. The Egyptians remained in the shadows, anonymous and transparent in the telling of their history.

However, one name did stand out: that of the Abdel Rasul. Hussein, the first as a child, happens to be the one who involuntarily discovered the famous tomb on November 4, 1922 on the west bank of the Nile, in the necropolis of Thebes (today, Luxor) in Qurna.

The versions vary between that he tripped over her, that it was his donkey or that he dropped a pitcher of water that exposed a stone.

Local mythology also says that their ancestors Ahmed and Mohammed discovered in 1871 the 50 mummies of Deir el-Bahari, including that of Ramses II.

Hussein’s great-nephew, Sayed Abdel Rasul, laughs at these stories when talking to AFP.

Have really sense believe that a child with a pitcher of water could make such a discovery? he asks. In any case, if someone saved files, it wasn’t us.

Christina Riggs points out that on the few occasions that discoveries have been attributed to the Egyptians, it has always been about children or tomb robbers, if not their animals.

Archeology is above all geographysays researcher Heba Abdel Gawad. In this area, local farmers have an advantage, because they know the terrain and its relief and they can say depending on sedimentary rocks if there are buried objects.

This is how, from generation to generation, the excavation work was transmitted in Qurna, a town where the Abdel Rasul live, and in Qift, north of Luxor, where at the end of the 19th century the inhabitants were trained in archeology by the British William Flinders Petrie. Mostafa Abdo Sadek’s great-grandfather was one of them, who at the beginning of the 20th century settled some 600 kilometers north of Qift to excavate the Saqqara necropolis, near the Giza pyramids.

He, his children and grandchildren have helped unravel the mysteries of dozens of tombs for a century, the grandson, a renowned archaeologist based in Saqqara, tells AFP.

Despite this, they have been discriminated againstcontinues Mostafa Abdo Sadek, brandishing photos of his ancestors whose names are still not in the history books.

The Egyptians were erased from the historical account due to the cultural occupation of Egypt of the last 200 yearssays Monica Hanna, dean of the Aswan College of Archaeology.

Must take into account the historical and social context of Egypt under British occupationclarifies Fatma Keshk, lecturer at the Institute of Oriental Archeology in Cairo.

In the mid-20th century, at a time of growing anti-colonialism, the pharaonic heritage served to strike the nationalist chord. The cultural battle then became political.

We are the children of Tutankhamunsang the diva Mounira al-Mahdiyya in 1922, the year of the discovery of the tomb of the child-pharaoh in the Valley of the Kings and the independence of Egypt.

Through campaigns mocking foreign domination of the national heritage, Cairo succeeded in the same year in ending the colonial system of sharing that guaranteed Westerners half of the unearthed pieces in exchange for financing the excavations. And so ancient Egypt was dissociated from modern Egypt, and hence the first considered as a universal civilization in a world that at that time summed up in the Westanaliza Abdel Gawad.

Tutankhamun remained in Egypt, but the country lost the archives of the excavationsan essential tool for any college publication benefiting the Carter Private Collection, Hanna recounts. We were still colonized, they left us the objects, but they took away our ability to produce knowledge about Tutankhamun.

When Howard Carter’s granddaughter decided to donate those archives shortly after the British archaeologist’s death in 1939, she chose Oxford University over Egypt.

That university is the one that, paradoxically, is currently holding an exhibition called Tutankhamun: excavation in the archivesin order to highlight the Egyptians often forgotten from archaeological teams.

A mummy at home

In Qurna, Ahmed Abdel Rady, 73, remembers that when he was a child the head of a mummy was found in a hole in his house, installed on the necropolis of Thebes, where he grew up.

“My mother burst into tears, begging me to treat that ‘queen’ with respect,” he explains to AFP and remembers with amusement that, at the same time, the woman kept the onions and garlic in a granite sarcophagus.

Today, the town is nothing more than ruins where, among tombs and temples, the Colossi of Memnon, built more than 3,400 years ago, seem to watch over the dead and the living.

In 1998, cranes arrived to destroy the small mud and brick houses of the 10,000 local residents, under which tombs from between 1500 and 1200 BC lie. Four residents who refused to be evicted died in clashes with the police. The protests of the inhabitants of Qurna against the demolition of their village were very intense, because they are deeply linked to the pharaonic heritage, says Abdel Hamid Daramali.

But the battle for history is also at the expense of the Egyptians, even despite criticism from UNESCO at the time. it had to be done to protect the heritage, insists the then Minister of Antiquities, Zahi Hawass.

In 2008, almost all the houses were razed and its inhabitants relocated away from their livelihoods around the archaeological sites and the lands of their cattle.

According to Monica Hanna, it was her reputation as grave robbers which led the authorities to turn Luxor into a Outdoor museum.

Sayed Abdel Rasul suffers from this since, years ago, several members of his family were discovered selling archaeological pieces behind the scenes.

Over the centuries, an untold number of antiquities have come out of Egypt. Some, like the Obelisk of Luxor in Paris or the Temple of Debod in Madrid, were gifts from the Egyptian authorities to friendly countries; others were sent to European museums under the colonial share system, and hundreds of thousands were smuggled out of the country to feed private collections worldwideaccording to researcher Abdel Gawad.

Now, with his new crusade, former minister Hawass wants to launch a petition in October for the restitution of the Rosetta stone, the bust of Nefertiti and the Dendera zodiac, three pieces that have been the subject of controversy for decades.

The Rosetta Stone, a stele engraved in 196 BC in ancient Greek, Demotic Egyptian and hieroglyphics, has been on display since 1802 in the British Museum in London under the sign taken in Egypt in 1801 by the British army.

A spokesman for the British Museum assures AFP that it is a diplomatic giftbut for Abdel Gawad it is nothing more than a spoil of war.

The bust of Nefertiti landed in the Neues Museum in Berlin through colonial distribution, says Germany. For Hawass, this sculpture, painted in 1340 BC, and which German archaeologists took away in 1912, left egypt illegally.

The Dendera Zodiac arrived in Paris in 1820 when Prefect Sébastien Louis Saulnier sent a team to blast out the bas-relief from a temple in southern Egypt.

It is a representation of the celestial vault of more than 2.5 meters wide and high, and has been hanging from the ceiling of the Louvre since 1922. In Dendera, on the other hand, there is a plaster copy. this is a crimeHanna denounces.

According to her, what was acceptable at the time, can no longer be compatible with the ethics of the 21st century.

One thought on “A century after Tutankhamun, Egyptians request to reassess their contribution in explorations”