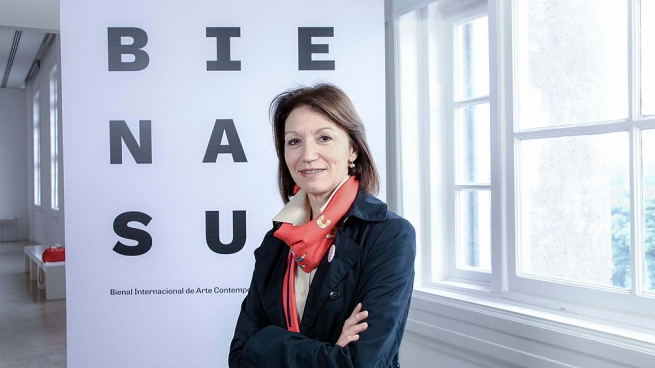 With the participation of about 150 artists from America, Europe, Asia and Africa will be inaugurated in museums of Argentina, Paraguay, Uruguay, Spain and Saudi Arabia exhibitions that explore the culture of indigenous peoples and dominant stories, environmental and gender issues, and ways of living after the pandemic, within the framework of the International Biennial of Contemporary Art of the South (Bienalsur).

The third edition of the Biennial, organized by the National University of Tres de Febrero, presents different proposals that will open from this week until the end of the month.

Tomorrow, at 5 p.m., the Kirchner Cultural Center (CCK) will open “Animal transfer” with videos by the Austrian Gernot Wieland, a show curated by Leandro Martínez Depietri, on environmental problems, and “From the wound” curated by the Spanish Virginia Roy with works that investigate the multiple tears (social, racial, gender and environmental). Both samples will be available until February 17.

While at 18, on the fifth floor of the CCK, the video installation will be presented “The green light” which addresses the ways in which information is shared and constitutes us as subjects in society, by the Saudi artist Ahaad Alamoudi, which can be seen until December 10.

Also on Tuesday, at 6:00 p.m. and 9:00 p.m., the Video Program arrives at the Xirgu Espacio UNTREF of filmmakers from Brazil, Argentina, Colombia, Turkey, the Netherlands, Croatia, Canada, Spain, Azerbaijan and Austria. The cycle will continue on the 17th and 24th at the same times.

On Thursday 11 at the Museum of the National University of Tucumán (MUNT) “The sun is a very high ceiling”, curated by Gaspar Núñez, will be inaugurated, a retrospective of the artist and teacher Myriam Holgado in dialogue with productions by young creators such as Hernán Aguirre García, Tenor Grasso, Alejandra Mizrahi, Juan Ojeda, El Pelele and Mariana Tellería.

On Friday the 12th, the second edition of the exhibition “The Listening and the Winds” opens at the Migliorisi Foundation in Asunción del Paraguay, which features works from the Museo del Barro made by indigenous women, artisans, artists, activists and researchers who they produce records and events from listening to stories, memories and feelings of the original peoples of Latin America.

Meanwhile, on the 12th and 13th of this month, they are inaugurated in Montevideo, Uruguay, Five chapters traversed by the curatorial axis Modes of Inhabiting: “Ephemeral Architectures” with installations by the Brazilian Alan Oju and the Argentine Bruno Del Giudice, and curatorship by the Italian Benedetta Casini and Liliana Piñeiro, at the Contemporary Art Space.

The second chapter “Rereading signs – re-imagining spaces” with works by the Saudi Muhannad Shono and the Swede Peter Johansson, will open at the National Museum of Visual Arts.

Another of the samples, within Modes of inhabiting, is “Indices of the Everyday”, which will open on the 13th, at the Museum of Pre-Columbian and Indigenous Art, which, from a gender perspective, collects works by female artists from different parts of the world. on the consequences of the pandemic.

That same day, “Anarchitekton” will be presented, with a video-installation by the Spaniard Jordi Colomer, curated by Casini, at the Uruguayan SUBTE Centro de Exposiciones.

In parallel, the Cultural Center of Spain in Montevideo it will add “Urban Camouflage”, with creations by the Spanish Javier Rodriguez Lozano, the Slovak Danilo Milovanovic, the Uruguayan Valentina Cardellino, the Argentine Francisco Estarellas, the Dutch Koen Taselaar, the Chilean Gianfranco Foschino and the Colombian Yohn Jader Bedoya, among others.

Meanwhile, on Wednesday 17 at the Reina Sofía National Art Center Museum in Madrid (Spain), the first retrospective dedicated to the Cuban engraver Belkis Ayón, curated by the Cuban Cristina Vives, will be presented.

On Tuesday 30, it will open in Saudi Arabia, in Al Kandarah District of the city of Jeddah, the exhibition “Echoes. A world between the analog and the virtual” that investigates the new ways of understanding reality from the prominence of digital technologies in the present pandemic.