In Saara Turunen’s new play, the egg clock is already ticking menacingly, because a 40-year-old woman must either have a child or have grounds for childlessness 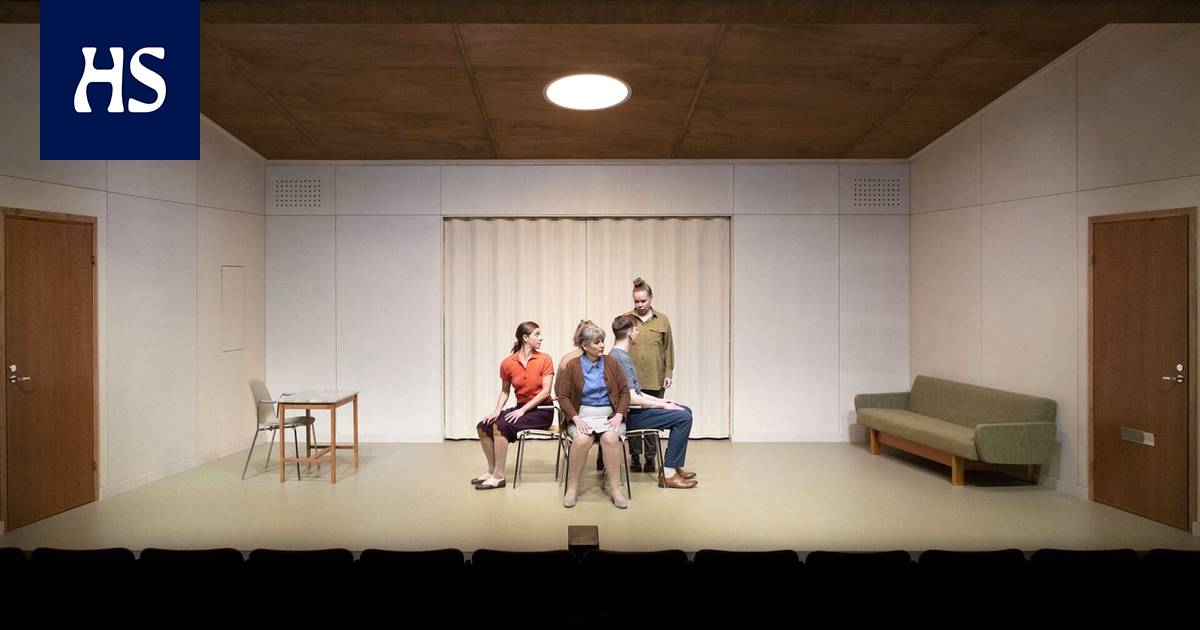 The fruits of reason turns to look more inward than the first two parts of the room trilogy, The Ghost of Ordinaryness and Medusa’s Room.

Expectations were high, that’s for sure. Saara Turunen The ghost of the ordinary (2016) and Medusa’s room (2019) were not only excellent but also excellently liked, so the performance that closes them into a trilogy tickled in advance in a special way. What could we see in the third show? What kind The fruits of reason writer and director Turunen would have prepared for us?

Although The fruits of reason is of course also a work in its own right, in the name of honesty it must be said that it must be viewed in relation to previous works. It also feels itself, tenderly and a little wistfully, taking the previous performances along with it in many small and large details.

Spectators The scene waiting in the Q theater is even more reduced than in the previous two. Light office-like walls, brown paneled ceiling, inconspicuous doors, chubby wavy door screen of the parish hall. No colors, nothing eye-catching. The director Milja Aho has demarcated object nostalgia too to a minimum.

Designed the outfit Rosa Marttiini has dressed the Actors Pirkko Hämäläinen, Katja Küttnerin, Anssi Niemen, Ylermi to Rajamaan and Crete Salminen with restraint. To broken green, pink, brown, burnt orange. Of the broken tones, only the red dress of the little girl played by Nieme stands out.

The view is the same as the overall impression of the show, which could even be described as muted. It definitely doesn’t mean weak – that’s how strong the suction of the show is – but just in case The ghost of the ordinary and Medusa’s room were very social, yes The fruits of reason rather turned inward.

Society has not disappeared anywhere, of course: personal onas we know, political.

Especially when dealing with topics like the female body, sexuality and reproduction, which are The fruits of reason in the center.

The show begins of the egg clock by the graphic designer Pate Pesonius has also depicted the show as a painting-like advertisement poster. In the game of chairs that starts the show, Katja Küttner is left without a seat and is handed an egg clock.

The meaning of that cheery trigger familiar from kitchens unfolds over the course of the show. A biological clock? Or rather some kind of social ticking, according to which a forty-year-old woman must either have a child or have a reason for childlessness – as Turunen has said in the interview.

When the new mothers played by the other actors reflect on their swaddling babies, Küttner’s character is encouraged to wrap her egg clock in a swaddling cloth. It doesn’t really work.

With the seemingly random structure of the play, Turunen manages to overlap different topics – reproduction, neurotic fear, death, a decent or normal way of life – in such a way that they emerge from each other with new meanings.

Why is there horror behind a “wrongly” wiped table or knitting that goes into a knot?

Do the ticking seconds of death drive us

Deadly in case of emergency, of course a priest comes to the rescue, but what if he’s Ylermi Rajamaa’s wannabe guitar hero? Who urges Hanna, howling “ugly” in her pain, to be a little more tidy in the holy room.

By the way, Küttner’s furious crying stings your own feeling, when you catch yourself that when the crying starts, it appears genuinely ugly and, above all, alien to “us”. It has not been customary in Finland.

Pirkko Hämäläinen, who has been seen on the theater stage for a long time, has two faces: an expressive and worried lady’s face – but also a scary mask face.

Anssi Niemi does her red dress girl beautifully and plays her video teenage bombshell so that the character is delicately drawn in all its ridiculousness. The wife’s gaze wondering at Kreeta Salminen’s video asks a thousand questions, even though her mouth says little. “I could never be like that.”

Turunen himself writes in the manual that it is delicious for the artist if the background of the work is some kind of classic to refer to. The contents then start to talk to each other. For giving the name to the show John Steinbeckin The fruits of anger However, Turunen writes that he has distanced himself quite far.

When the artist brings out the background in this way, it is also delicious for the viewer. In the fruits of reason there is at least one passage that seems to be specifically discussing I hate fruit with the final picture. With that, the viewer can later continue their own conversation with Steinbeck’s classic, maybe look at it differently.

In Medusa’s room used as interludes Georgia O’Keeffen The flower paintings were hypnotically beautiful. Now used by Amy Weiskopf the eggplants and figs in the paintings do not work with the same intensity. But Weiskopf, quoted in the manual, says: “The truest power of art is free of words, non-verbal.”

One thought on “In Saara Turunen’s new play, the egg clock is already ticking menacingly, because a 40-year-old woman must either have a child or have grounds for childlessness”