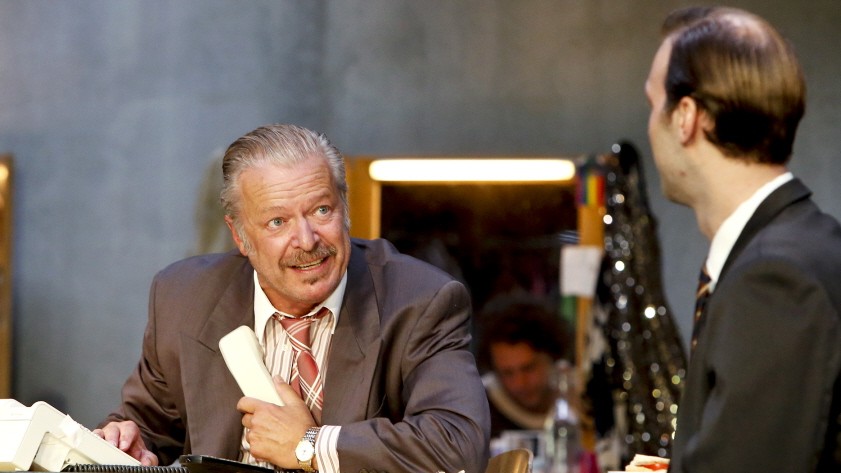 What else might one anticipate from a documentary theater performance on the Munich Olympics of 1972? The games, which started out so joyfully and ended in fear, have been the subject of lengthy newspaper articles and television programmes over the past few weeks. Meanwhile, even after a painfully protracted wrangling, the German state leadership, represented by Frank-Walter Steinmeier, begged for forgiveness, acknowledged the police’s utter failure to stop Palestinian terrorists, and the compensation negotiations came to a successful (can this even be called successful?) conclusion. And right now, Hans-Werner Kroesinger and Regine Dura’s play “The games must go on – Munich 1972” in the Marstall of the Munich Residenztheater is bringing everything together on stage. Does this offer any fresh insight?

The purpose of theater is to convey more than just information. The emotional force of the theater ultimately has an impact that can go much beyond what you could experience while reading or watching television. In fact, the evening leaves you with a strong sense of wrath as well as humiliation. Then, one becomes furious over documents that are still kept secret, the government’s utter unwillingness to share information, and politicians’ efforts to conceal the truth. But there is also a 1.5-hour theatre performance that, although moving in the right direction, takes detours and isn’t always successful.

Kroesinger and Dura are incredibly skilled documentary theater creators; they can get lost in mountains of documents, find them against resistance, and read them like anyone would read a picture book. They carried this this about a year ago using the evidence from courtroom 600 during the Nuremberg war crimes trials. But at the time, it was focused on reenacting a particular incident. With the Olympic component, everything is now transparent and there is a plenty of material. too large

“Beware of icy liquids” as well as hypothermic people.

Four actors and an actress who were dressed elegantly in the pastel hues of the game’s corporate design appeared on stage to portray speakers from the past. They read the text quickly and first put together a stunning tableau of the idealized vision that the games are supposed to realize. Munich is radiant, everything is upbeat, and a new, more positive perception of Germany is intended to replace the memory of the Nazi Games of 1936. A quotation from Franz Josef Strauss, “A people that has attained such economic successes, has the right to not want to hear anything more about Auschwitz,” is added to this painting of text and video flood, which succeeds fascinatingly well. The most unexpected item was what Kroesinger and Dura discovered in ancient GDR files. Erich Mielke, the head of the Stasi, personally drafted detailed instructions on eavesdropping on one’s own team: Agents are advised to keep the area clean, eat two main meals each day, and “avoid ice-cold drinks.” This GDR manifesto of ignorance is wonderful.

But one would have to slow down as the nightfall of fear draws near. However, the action is choppy and bouncy, and the voluminous movies lack famous shots like Issa, the terrorists’ leader, donning a white helmet and face paint. Instead, you keep seeing dark images of the Olympic Village or its surroundings in vivid hues. A little peace only returns after the murder and the peculiar occurrences at the Fürstenfeldbruck airfield have been revealed, when the processing and, most importantly, its flaws, have been reviewed. Even though the ending is quite potent, there is something Kroesinger and Dura are missing: the malleability of the emotion. Only Ankie Spitzer, the murdered fencing instructor’s wife and spokesman for the families of the victims, played by Hanna Scheibe, is permitted to develop a real personality. At the conclusion, the five actors put together an Olympic dog from of discarded materials. Though not in pastel rainbow colors, you can see the site’s roof on it. When taken closely, it now resembles a lattice, making it appear like a jail. On the wall above are the names of the deceased.

The Residenztheater begins the season with a masterpiece the day before. The 2015 Basel production of “Angels in America” by Tony Kushner by Simon Stone is arguably the best spoken theater he has ever created. Three years ago, Andreas Beck, a Basel-based director at the time, intended to bring the production to Munich for his debut. Corona then arrived, and it has since succeeded. The conversations still sparkle, the performances are flawless, and Roland Koch, who plays Trump’s homophobic gay lawyer Roy Cohn, is the center of attention on stage. But today, seven years later, this epic five-and-a-half-hour work about love, life, capitalism, and death (via AIDS) is even more of a debate point on exclusion, cultural appropriation, and role models. This performance still has something to say about how the world has changed.