the last genius, with influences on Argentine literature 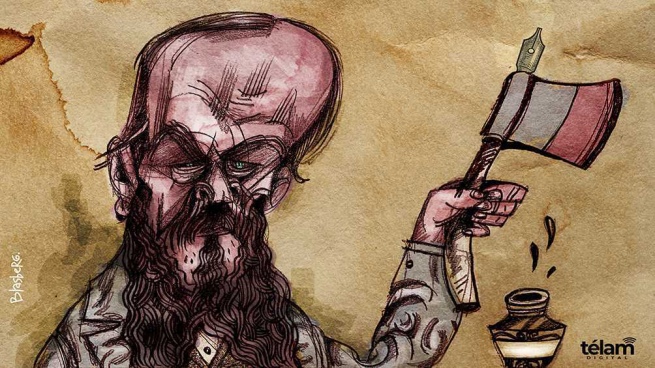 This year there were many activities around the figure of Dostoevsky. There were round tables, conferences, meetings and exhibitions that were developed and continue to do so in virtual mode, as reported to Télam Alejandro González, the president of the Argentine Dostoevsky Society, who defines the Russian writer as “the last great genius in terms of literary and philosophical greatness (later it is difficult to find such writers). Dostoevsky is at the height of a Dante, a Shakespeare, a Goethe”.

The association directed by González – Slavist, translator, distinguished with the prestigious Lee Russia / Read Russia Award for the translation of “El doble” by Fiódor Dostoevski for the Eterna Cadencia publishing house – co-organizes, together with the Research Group “Slavistics, caucasology and linguistic typology “, the Royal Hospital Library and the Library of the Faculty of Philosophy and Letters of the University of Granada, the bibliographic exhibition” Beauty will save the world “, where the works of Fyodor Dostoevsky existing in the funds of the Library of the University of Granada and in private funds, in commemoration of the bicentennial of the author of “Crime and Punishment”.

“Roberto Arlt assumed all of Dostoevsky’s guidelines. Polyphony is that ability to make different voices heard and with different listeners”Jose Amicola

Regarding the influence that the Russian writer has had on Argentine literature, the experienced translator, who carried out postgraduate studies at the Faculty of Philology of the University of Petrozavodsk, Russia, and translated more than thirty titles in Argentina, Chile and Spain, marks two clear references: that of Roberto Arlt in the first half of the 20th century and that of Ernesto Sabato in the second half.

Also the renowned critic José Amícola, who received his doctorate in Germany in 1982 with a thesis on Roberto Arlt and published in 1995 “Dostoevsky. Polyphony and dissonance”, agrees in pointing out the same writers and clarifies: “There are three points in Dostoevsky: polyphony on the one hand, and related to this formal aspect is the question of listening to social discourses and a third, the most fabulously widespread in the entire world. world is the version of the tortured soul of the individual, “he sums up.

In this sense, in Amicola’s opinion, “Roberto Arlt assumed all of Dostoevsky’s guidelines. Polyphony is that ability to make different voices heard and with different listeners, for example, the anarchists, the right wing and the fascists. In the soul tortured in the same case of Arlt one can think of Remo Erdosain, the protagonist of ‘The seven fools’ “.

Ernesto Sabato, especially with his first novel “The tunnel” and later, also with “On heroes and tombs”, specifies Amicola, “has a line with Dostoevsky”. Later it appears filtered through other authors who received the first influence from the author of “The Karamázov brothers”, the Argentine critic points out “I am thinking of Samuel Beckett, for example, who always appears in young authors, in their complexity , the very intricate character, the one who gives himself a lot of handle, “he remarks.

The bicentennial year of his birth also marks the 140th anniversary of his death.Eugenio López Arriazu He is a translator of Russian, English, French, Latin, Bulgarian and Serbian, is the director of the chair of Slavic Literatures and translated “The player” by F. Dostoevsky, person authorized to speak about the author of “The Eternal Husband”: “Dostoevsky’s work continues to move those who read it because of its themes,” he remarks and adds: “Each historical moment rereads his work in a particular key. For his novel ‘The demons’, to quote one of his great works, has been read as an anti-Nahilist in the 19th century and as a prophet of the Russian revolution in a negative sense by the philosopher N. Berdiáev, but in another positive by the revolutionary A. Lunacharski “, he details.

For its part, the Pampean translator Omar Lobos, who has made the first Argentine translations directly from Russian of “Crime and Punishment” and “The Karamázov Brothers”, and published “FM Dostoevsky during Soviet Russia”, “Dostoevsky’s edition in Brazil”, “The powerful music (a translation of ‘Crime and Punishment’)” and is a member of the scientific-advisory committee of the international journal Dostoevsky Studies emphasizes that “Fiódor Dostoevsky is an author always disturbing and current for the reading public”.

“Often,” he continues, “it is discovered already in adolescence and it is a kind of fatal sting. And why does Dostoevsky subjugate?” the translator wonders: “In principle, there is a superlative novelistic mastery in him, to use all the resources of suspense (even the cheapest ones) and sustain the plot with permanent intrigues, elements that come from the serial, from the commercial dynamics of the folkloric novel. Another element is the strong outline of its characters, whatever their rank (main, secondary, circumstantial), which makes them very particular and ´extravagant´ despite their subjection to realistic precepts, which aspire to the configuration of ´ types’, that is, characters that express a generality rather than a particularity “.

Lobos refers to the “case of Raskolnikov, for example, a student of the common, who decided to do what in his time could decide to do” anyone. However, he is one of those characters in world literature that transcends the framework of the novel, and has a fame and entity on par with those of Don Quixote, Hamlet, Faust. And other undoubtedly powerful components in Dostoevsky’s narrative are humor (often in a grotesque combination) and poetry. ”

“Only in the last twenty years in the Spanish-speaking world, translators and critics are trying to recover the Dostoevsky writer with a fine sense of humor, a lot of sensitivity”Alejandro Gonzalez

Along these lines, González adds: “Only in the last twenty years in the Spanish-speaking world, translators and critics are trying to recover the Dostoevsky writer with a fine sense of humor, great sensitivity, with the recovery of everyday Russian speech, even a certain jargon, “he emphasizes.

“Western criticism was responsible for turning Dostoevsky into a great philosopher, an existentialist, Sabato himself reads it that way through French existentialism, some even see him as a psychologist and lose sight of the writer who works with language, he twists the Russian language, how it forces him to take him where he wants, “he says.

López Arriazu tells of his experience with the translation of “The player” which implied him “to capture, with the care required by a task that progresses word by word, reading and rereading, precisely the psychological subtleties of one of those uncomfortable and uncomfortable characters. Translating Dostoevsky implies capturing this psychology by stopping the vertigo of a torrent of orality, to later restore that torrent, “he agrees with the rest of the Argentine translators.

González highlights that Dostoevsky was the first to reflect the consciousness of the modern subject in a literary way. He did it from Saint Petersburg, which surprises Europeans with his usual ethnocentrism: “We did not have to wait for Freud, but in his work we already find the keys to fragmented consciousness, the broken subjectivity of modernity. One can read ‘Crime and punishment ‘or’ Memory of the subsoil ‘where it reflects how the consciousness of the modern subject operates is a split consciousness, aware of itself and at the same time bottomless and aware that the notion of the subject as such explodes into a thousand pieces, the idea of subject object “.

“Let us think that positivism was beginning to reign in the 19th century in Europe and a little later in Russia and at that very moment Dostoevsky puts a stick of dynamite in the center that is going to explode everything,” says the critic, while reflects: “It is no accident that Europe discovered Dostoevsky in the late 19th and early 20th centuries, when the European discussions reached that point.”

“It is already known – González remarks – that Freud makes a slightly distorted reading of Dostoevsky’s biography to talk about parricide; the West needed to reach the prewar and postwar crises of the First World War, the conflicts that existed in Europe, the crisis of reason, the rise of existentialism “. Europe needed to reach these critical moments to find in Dostoevsky a source in which to look for clues.