New play by Yael Ronen at the Maxim Gorki Theater 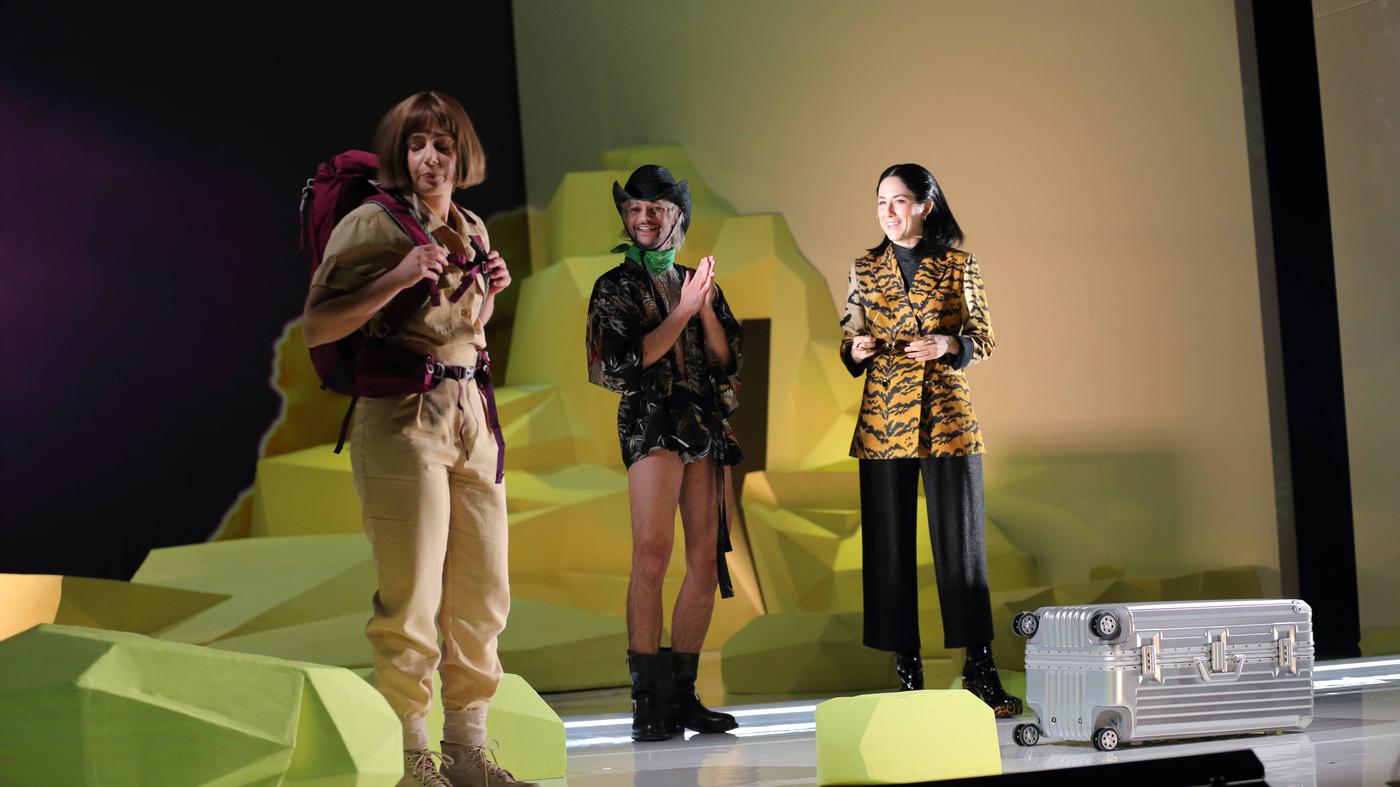 This was not how Gabriella had imagined it. Her life partner Elinor calls a kind of family reunion in the Israeli desert and has the invitation delivered by a twenty-year-old kimono wearer whose outfit ends just above the groin and who introduces himself as Elinor’s “soulmate”: The sex with her is really great. Appropriately piqued, Vidina Popov stands as Gabriella on the ramp, one hand pressed to the high-priced leopard print blazer, the other trying to hold on to the handle of her branded trolley case.

The sunny boy, to whom Doga Gürer gives a perfectly formed zero-checker naivety, naturally doesn’t let Elinor’s daughter Luna slow him down in his continuous monologue, which is completely insensitive to the situation. The controlled Luna (Aysima Ergün) is about to take her medical state exam and has been disappointed and lied to by her mother far too often to be able to take her invitation seriously as an SOS call. In the end, the trio, as well-made-play principles want it, of course, set off after all. Whereby Luna has the relevant advice ready for Elinor’s kimono lover to slip on a pair of trousers when the opportunity arises.

Actually, there is a lot in this comedy constellation that the director Yael Ronen and the actress Orit Nahmias came up with for their joint play “Blood Moon Blues” at the Maxim Gorki Theater. For example, the question of how loudly people who label themselves as progressive actually deal with a woman and mother who torpedoes traditional expectations of women and motherhood with grandeur when this torpedoing hurts them.

The plot is exacerbated by the fact that Elinor, about whom we learn before her first appearance, howls naked with the wolves at night, unless she is working as an unsuccessful writer on her latest book, is bipolar and her partner Gabriella is also her doctor.

Between sex and illness

So what about the much-vaunted relationship work if it remains structurally unclear where the personality ends “and the illness begins”, as the play says? Another question that lies beneath the funny-funny surface, which is sometimes a bit cramped with originality.

But when Orit Nahmias, who plays Elinor herself, actually appears in Wolfgang Menardi’s desert stage design, the surface is hardly scratched. Basically, Nahmias embodies a rather violent character who smashes back every (close) need that is brought to her by others in casually merciless Boomerang manner. Gabriella wants to talk about her relationship status in light of the kimono lover? What disappointing egomania! Luna finally wants to know who her father is. Yes, does everyone here think only of themselves?

The next performances of “Blood Moon Blues” are on November 27th. and December 27th.

But oddly enough, all those slingshots and plot twists do next to nothing with the characters. Even that supposedly surprising announcement, which acts as the reason for the meeting and is actually supposed to unhinge everything that has gone before, does little to change the temperature of the event: the evening continues to ripple from one briefly touched topic to the next, from one touched-on dialogue to another.

In fact, nobody can fool the author and director Yael Ronen in this discipline: using stereotypes as a launching pad and then, with sharp wit, working your way into those abysses where contradictions, blind spots and pain points lurk. And Orit Nahmias – as an actress – has also demonstrated this ability in countless Ronen evenings. Especially in the development of the pieces, which often come about in cooperation with the ensemble and draw on the biographical backgrounds of the performers.

Unfortunately, when Ronen and Nahmias work together as an author duo for the first time, the excavation work does not succeed. Much remains surprisingly stubbornly stuck in clichés. There are plenty of ronen evenings with Nahmias that could be listed, which only begin where “Blood Moon Blues” ends. So there is a lot of hope for the future.