In a book, Mexican and Arab illustrators swap mythology and colors 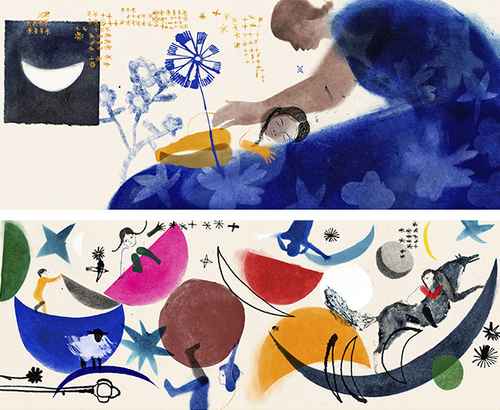 On the pages of the book Folktales Reimagined, Mexican and Arab illustrators come together to share colors, pictures, and sensations while reinterpreting both the mythology of our nation and the legends of the desert.

A celebration of the presence of the Arab emirate Sharjah as guest of honor at the 36th International Book Fair (FIL) from Guadalajara, this editorial project of the UAE Board on Books for Young People was managed by IBBY United Arab Emirates and IBBY Mexico.

The book will be introduced during the bookstore meeting, which gets underway on November 26. The chosen national artists are Amanda Mijangos, Guillermo de Gante, Juan Gedovius, Armando Fonseca, Valeria Gallo, and Guillermo de Gante. The last two were recognized at the Sharjah Children’s Book Illustration Exhibition, the largest international display of children’s picture books in the Arab world.

Fonseca took home the top prize for his illustrations for José Saramago’s An Unexpected Light, which was reviewed on these pages on January 19 of this year. Mijangos earned second place for her illustrations for Micaela Chirif’s The Sheep, which Limonero will publish in 2020. (Argentina).

Young readers are questioned by the authors of this book: Do you know how sheep count to sleep? Flowers. A sunflower, two roses, three geraniums, four jasmine, etc. They also share legends of far-off lambs, rhinoceros, and even aircraft and rainbows.

Attend Folktales Reimagined. We Mexicans were requested to illustrate myths, legends, or well-known tales from the United Arab Emirates, and vice versa. It was a very intriguing experience. In an interview with The Day, Amanda stated, “For instance, I was moved by the tale of a titan or giant by the name of Shanaq Bin Anaq, who lives at the dawn of time and wanders the villages stealing food and water, but not because he is wicked, simply because he is hungry. People eventually reach a consensus and decide to cease plundering their resources. After passing away, the titan is changed into a kind of island or mount.

Because the text never says that the character has a face, Armando was forced to create a character who resembles a stain; the darkness that devours the young thieves of dates. By the end of the discussion, everyone had come to the realization that despite being from two very different parts of the world, both cultures have their origin stories. More than anything, it was a meeting where each person tried to relate to the texts of the other.

The discussion is everything.

Mijangos, an architect by training, has committed herself to illustration for 11 years, starting from the moment she fell in love with the field while enrolled in the diploma program at the Academia de San Carlos taught by Gerardo Suzán (as part of the Continuing Education program of the Faculty of Arts and Design of the National Autonomous University of Mexico).

“Even though it took me a while to land my first job, Santillana still publishes the first book I worked on as an illustrator, The dream of a bean, a poem by Argentine author Eduardo Carrera that describes the growth of a tiny bean.

The example combines work, persistence—or folly, depending on how you look at it—and luck to some part because I look for personal interests that coincide with individuals who can delve deeper into the trade.

He continued, saying that dialogue—especially with people who share your interests—is what illustration is all about. When that occurs, it is good because it gives us the chance to explore our worries and uncertainties and find solutions or answers that would otherwise take us longer or more effort to find on our own.

“Perseverance and courage led to the recognitions or the potential to carry out undertakings beyond the country. As we get more experience, we become more confident. I can still remember how nervous I was to send my portfolio at first. However, I’ve since learnt that rejection is much more common than acceptance, and it has no effect on my ability. Instead than requiring something that is outside the scope of our interests or gaze, we must learn to recognize and build upon our capabilities.

About November 28 at 5:00 pm in the Sharjah pavilion at the FIL Guadalajara, the book Folktales Reimagined will be launched. On December 2 at 11:15 am, there will be a discussion table on the project.

One thought on “In a book, Mexican and Arab illustrators swap mythology and colors”