Ansilta Grizas: ‘I did not write a book about death but about pain’ 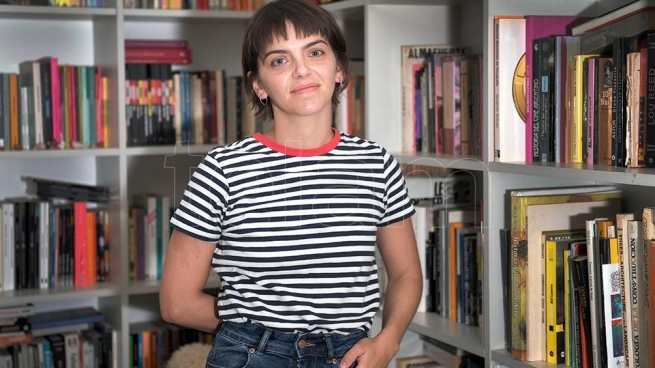 “You are there more than dejected, with the body in the most absolute disappointment: useless. A huge box of bones, muscles, nerves, liquids and bacteria that no longer serve much, but that subsist subordinated to a single beat,” he describes with exact doses of rawness and tenderness the author, photographer and publicist by profession who went through the workshops of Cynthia Edul and Romina Paula. “It is already difficult to find you even if you are in front of me. Even if you seem to be listening to us, sometimes I feel like you’re walking somewhere else, ”he insists as he accompanies that loved one on the path to oblivion.

“Ansilta Grizas writes to conjure up memories, as if she feared that in her father’s oblivion she might also fade away. Write as if words could contain the world ”, he points out on the back cover of the book edited by Entropía Romina Paula.

About the reasons that led her to register her father’s illness and the operations that allow turning her own autobiography into literature, the author spoke with Télam. Here are the central fragments of the interview.

Ansilta Grizas was born in San Juan and is still linked to the images of her land: Photo: Julián Álvarez.-Télam: The reader senses that what you tell in the text about the relationship between the daughter and a father that is deteriorating has a great autobiographical component. What expectations did you have of this writing? Is it a way to seek healing or liberation through catharsis?

-Ansilta Grizas: I don’t know if writing heals. Actually, I couldn’t do anything but write. Nothing else came out. I wrote in a notebook while accompanying my father to look for nursing homes for when he could not take care of himself. From that material the book emerged. Someone told me that this could help a lot of people and I would be glad if it did, but I didn’t have that intention. It seems to me that it was like a way of passing through that time.

There is a photo that I really like of Adriana Lestido, which is from the day her father died and she took a picture of heaven because that is what she did. Well, I started writing to get through the disease but I think that ultimately it ended up being a way to grieve.

-T .; But your father is alive, as you realize in the dedication …

-AG: Yes. But there is always talk of mourning after a person died. But I am interested in the previous process that occurs every time someone is dying, because this is also another mourning, I think I did not write a book about Alzheimer’s and death but about pain, about the maturation of that pain of the protagonist, who is first angry and then finds another resignation and another way of looking at things.

-T .: In that sense, you made the decision to make the autobiographical component transparent …

-AG: Yes, but there is something that is important and that is that my father did not die. That is why the dedication is “for my dad who is still here.” For me it was the great break I made from autobiographical writing to detach myself from real history and it was to look for another ending and take a step towards fiction. It was a liberation for me to say: “This is where the story came,” and it was also much more freedom to continue writing. I made a lot of progress when I said that I had to kill my dad because if I didn’t, I wouldn’t be able to continue writing.

-T .: You chose a second person narrator, as if you were speaking to your father, as if you wanted to help him remember.

-AG: It happens that the book began with a letter to my father. That second person came out of there, that at one point I needed to tell him some things. There are parts of that letter that remained in the novel. I rescued him from there, from the attitude of talking to the other.

-T .: You worked on the text in a literary workshop, what was the contribution of those other views in history?

AG: I had an accompaniment. In 2017, I did a workshop with Cynthia Edul. I took the first things to him to see what he was doing and there they encouraged me to continue writing it. That year I was pregnant with my second child and Alfonso was born in August. But I went every Monday with new material because I wanted to advance the novel as if it were seen as if something was going to happen. And he was born and I stopped going. But there the proposal arose to make a cut, to detach myself from reality to transform it into a novel.

Photo: Julián Álvarez.
-T: Although “A temporary” is centered on your father, there are other stories in the mirror: other cases of Alzheimer’s and even a case of euthanasia, as if the deterioration of a loved one, and, at the same time, that need to make decisions, to save suffering, they were not a particular case but a situation that is repeated …

-AG: Yes. I did not focus on the issue of euthanasia itself, but I was interested in the issue of the dignity of the human being. They are two cases of very close people: the mother of a friend and a friend of the family. I was interested in including those voices of people who want to live the last time of life in the most dignified way possible.

-T: You chose a crude, merciless writing in some descriptions of certain states of your dad and even physiological issues.
-AG: I did not want to use metaphors. I work in advertising and I also wrote scripts and decided to build scenes that were to the bone of things. Somehow it has to do with how things happened. However, there is something that did happen to me and that is that certain situations, when you look at them in hindsight, end up being funny. There were even moments of insults from me to the doctors, to the situation itself that later went into the edition.

-T: Perhaps as a vindication of your San Juan origin, nature is very present in the novel. Even some phenomena that happen in nature such as the storm, then move into the lives of the protagonists …

-AG: Sure. Perhaps nature is one of my obsessions. I see nature and man as two equivalents and I trace how nature also affects man and man nature. These parallels are very present between the inside and the outside, between the body and the mountain.

“A storm”.-T: You even bring images of nature from other moments in your life, like the residency you did as a photographer in Antarctica … The fragility of the ice, the dark, in relation to the memory of your father.

-AG: It was a residency for artists in 2011 and I tried to recover that feeling of being in places where one feels tiny in the vastness. I think it has to do with that idea of ​​man in front of the mountain, at the mercy of nature, which cannot modify anything. I was interested in that. I am interested in nature and it seems beautiful to be there, in that situation.

-T .: Anyway, the memory of your trip to Antarctica has a place because time is not linear in the novel, but from the diagnosis to the subsequent deterioration memories, anecdotes of your childhood, of your father’s exile, arise.

-AG: It has to do with an attempt to reconstruct the memory of the two. There is a more linear present in relation to my pregnancy, the birth of my children and their growth that is measured even in the length of their legs. That is pure present. But there is also a movement of going to look for the past, it is as if I put my fingers in the sand of memories to see why we are here.

AG: I thought of the novel as a blog. It has to do with the fact that it is a book that I wrote by hand in a notebook. It started with those little notes in a notebook. But just as a theme is spun with another and there is a continuity.

-T.:While you were writing, did you read other books about Alzheimer’s or about saying goodbye to a loved one to dialogue with other texts?

-AG: I read “Disarticulations” by Sylvia Molloy in which she tells of a friend’s Alzheimer’s. Also the poet Tamara Kamenszain edited “The echo of my mother” on the illness of hers. They both dated while writing. I also reread what Philip Roth tells about his father in “Heritage.”