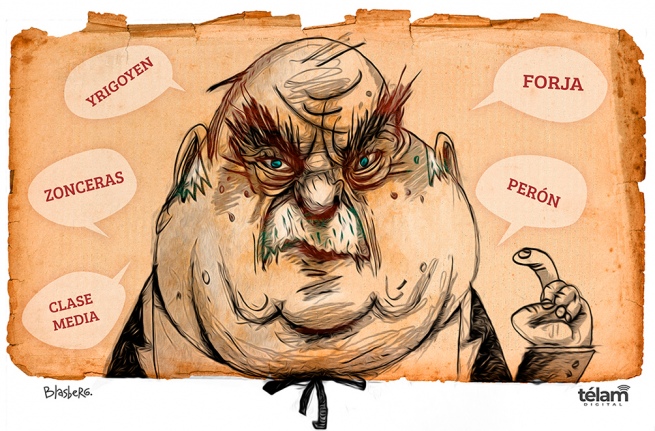 A defiant thinker who satirized the majority values ​​of the middle classes, an intellectual who did politics and put the body to participate in the 1933 armed rebellion of Yrigoyen radicalism in Paso de los Libres, or to be one of the last in 1971 Duelists in a gun battle with General Oscar Colombo, minister of the dictator Alejandro Lanusse, are some of the facets of the personality and work of Arturo Jauretche, whose birth this Saturday marks 120 years.

Recognized as the great “Creole” polemicist of popular nationalism, an ideologue who passed through the Infamous Decade that began in 1930 from the Radical Orientation Force for Young Argentina (Forge) and who adhered to Peronism with enthusiasm and critical capacity, Jauretche became after the coup of 1955 one of the most influential authors of the generation that resisted the political ban and who wondered about the deep reasons for the dependence.

From the essay format, with nods to the gaucho style and to the criminal ways of street speech, Jauretche wrote books that with the passage of time continue to be a source of inspiration or debate, although little is returned to their content, especially the best known “Manual of Argentine zonceras “(1968) or” The medium hair in the Argentine society “(1966).

His work as a writer always revolved around the defense of sovereignty and national interests and also fed on columns that he wrote regularly in different media., such as the article he published in the newspaper La Opinion against the military man Colombo, Lanusse’s Minister of Public Works and Services, to accuse him of putting YPF’s assets at risk.

One of his early works, “The Prebisch Plan: return to colonialism” (1956), consists of a critical analysis of the report that ECLAC economist Raúl Prebisch made after the coup against Perón at the request of the Liberating Revolution: it is about a book that, for those who studied it in his time and reread it recently, such as the lawyer and ex-undersecretary of Human Rights Luis Alén, anticipated the dimension of the problem that resorting to the IMF means.

Jauretche was a man of the Buenos Aires bars: He spent hours reviewing the newspapers at the Castelar de Córdoba and Esmeralda café (also known as Castelarito to differentiate it from the Hotel Castelar bar, on Avenida de Mayo) and the accumulated time between tables, talks and tin made him the protagonist of dozens of anecdotes, including one that later could be verified by the historian Norberto Galasso, whose own work is part of the tradition of Jauretche and Raúl Scalabrini Ortiz.

Illustration: Blasberg.Galasso met the creator of the “Zonceras” in 1973, when he began to work as a trustee in Eudeba, the UBA publishing house, where the intellectual and polemicist who had participated in the Forja experience and had directed the Banco Provincia in the Peronist government by Domingo Mercante (1946-1952) he was considered almost a legend: Jauretche, then 72, had graduated as a lawyer in the early 1920s although he hated being called, ceremoniously, “doctor.”

His pride rather passed, like he himself was in charge of remarking, for having created or widespread the use of words that acquired a new meaning from his books, such as “tilingo”, “vendepatria”, “oligarch”, “sepoy” and “guarango”.

One of his early works, “The Prebisch Plan: return to colonialism” (1956), consists of a critical analysis of the report that ECLAC economist Raúl Prebisch made after the coup against Perón at the request of the Liberating Revolution

Regarding the episode of the Castelar café, which Jauretche had adopted almost as a workplace because it was on the corner of his house, Galasso said that it consisted of an altercation “with a customer who had had his shoes shined by a boy who had been the brush escaped and he stained a light-colored stocking “, after which the” customer reacted by pulling the shoeshine’s hair and yelling at him ‘you had to be a black man’ “.

“Jauretche was 72 and had been hospitalized. But he got up, yelled at the guy, to whom he said: ‘I’m going to teach you to respect the people, you son of a bitch.’ He fell from the table, it was a scandal in the cafe, where they were separated. After calming down, Jauretche came home with a stained shirt and Clara, his wife, told him: ‘But, Arturo, you went back to fighting as always’ , to which he replied: “There is one thing that I cannot bear and that is injustice, and less against my countrymen,” Galasso recalled..

This scene provides a piece of information about the vital attitude of the writer and essayist, who used to say that “when you argued, when you discussed political issues, you had to go deep and be clear, and to a certain extent impious”, as described in dialogue with Télam the lawyer Alén, for whom this combative spirit is summed up in the knife metaphor that Jauretche repeated as advice for polemicists: “That when you leave, you cut out.”

Alén shared long years of study, work and militancy with the deceased first secretary of Human Rights of Kirchnerism, Eduardo Luis Duhalde, who in turn wrote several books of Argentine history together with the deputy Rodolfo Ortega Peña (assassinated by Triple A), works signed in two hands that in some cases – “Felipe Varela against the British Empire”, 1966 – included letters from Jauretche and also the revisionist José María Rosa.

Jauretche himself, who was among the guests, appeared dressed only in a sheet fastened with a safety pin since he personified the character Upa, Patoruzú’s younger brother. The current rector of the National University of Lanús (Unla), Ana Jaramillo, then five years old, was at that party, of which she recalled that “she was running like crazy behind Upa, which I loved” without knowing that the Tehuelche baby that he saw in the comics was actually the former reference of Forge

Jauretche was the main disseminator of the thesis of “pedagogical colonization”, a concept with which he insisted from cultural criticism in the attempt to find the causes of dependence, and in his task of provocation he incorporated from crossings of letters and notes in the newspapers with representative personalities of what he called the ‘intelligentsia’, even funnier situations, far from any formality.

File.Another anecdote shows that transgressive and in a certain way creative aspect of his way of assuming the debate as a permanent activity: it happened around the year ’54 or ’55 in the Alfar building in Punta Mogotes, where several traditional families that vacationed in the southern area of Mar del Plata had gathered to celebrate with a costume party.

Jauretche himself, who was among the guests, appeared dressed only in a sheet fastened with a safety pin since he personified the character Upa, Patoruzú’s younger brother who with a huge belly and dressed in a diaper appeared in the magazine since 1928 created by the cartoonist Dante Quinterno.

The current rector of the National University of Lanús (Unla), Ana Jaramillo, then five years old, was at that party, of which she recalled that “she was running like crazy behind Upa, which I loved” without knowing that the Tehuelche baby What he saw in the comics was actually the former leader of Forja, a former Banco Provincia official and intellectual whom years later he would consider a fundamental piece “of national and Latin American thought.”