Ahaad Alamoudi: ‘My work is a reaction to understand change’ 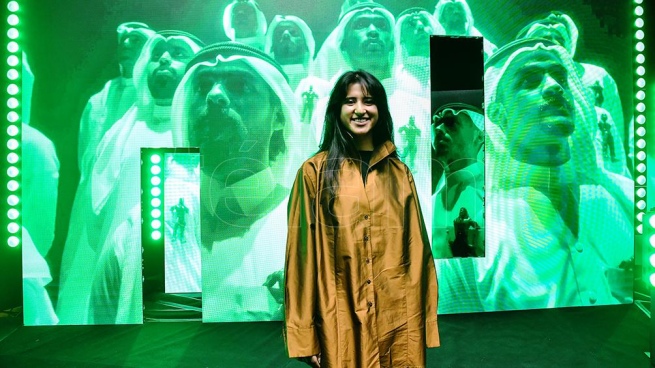 As part of the program of the International Biennial of Contemporary Art of the South (Bienalsur), born within the National University of Tres de Febrero, the young Saudi artist Ahaad Alamoudi exhibits at the Kirchner Cultural Center “The green light” (“The green light”), a video installation focused on the ways in which information circulates and, at the same time, involves the subjects of a society.

“I love that the work is and can be seen in Argentina because – although it seems like a crazy dialogue – I believe that they are two cultures that have faced the need to understand different points of view,” says the artist, only 30 years old, who grew up between England and Saudi Arabia and who today lives and works in Jeddah, the second largest city in her country, on the shores of the Red Sea.

She graduated from Dar Al Hekma University in Jeddah with a BA in Visual Communication in 2014 and finished her MA in Engraving at the Royal College of Art in 2017.

“The green light”, which can be seen on the 5th floor of the Kirchner Cultural Center until December 10, is part of the twenty works that Bienalsur will present in different stages until February 2022.

Bienalsur’s artistic director Diana Wechsler is also the curator of the Alamoudi show and warns that “each voice is identified with a unit that is built and rebuilt as the light turns on and off”. The messages then go dormant, and as the lights go on, the messages are broadcast again. “The work generates a hypnotic immersion that sends us back to thinking about one of the complex issues of our present on a global scale related to information: the ways in which messages are transmitted, attention is captured and positions are sought”, Wechsler maintains .

Photo: Alfredo Luna.
During his visit to Buenos Aires, Alamoudi spoke with Télam and said that his work, which deals with history and its representation, undoubtedly has the imprint of a biography shared between the two countries. He further explained that his research on the reforming ethnography of Saudi Arabia is reflected in installations of photography, videos and engravings that aim to explore the variations of the historical representation of Saudi Arabia.

-Télam: What is the message you want to convey with “The green light?

-Ahaad Alamoudi: At some point I realized that many of the questions that interested me revolved around the concept of light. Where it comes from, the relationship between light and darkness and the objects on which the light falls that, deep down, call us to think where the light is and where it is not now.

Photo: Alfredo Luna.-T .: And where do you see that the light is today?

-AA: I think my work gave me the perception that each one of us carries a kind of light with them. The source can come from different places: from the family, from society, from the economy or even from oneself.

-T.:How did you choose the phrases that the voices repeat?

-AA: I debated between a longer text and a short and simple one. And I think that “The green light”, as a staging, is a very simple work. So, it seemed to me that the message had to be short and easy to understand. Finally, I settled on two sentences that are repeated throughout the entire job.

-T .: “The green light” is now exhibited in Buenos Aires. What sensations did traveling to witness the inauguration cause you?

-AA: It is the first time that I travel to Buenos Aires thanks to the Ministry of Culture and Bienalsur. I have been learning a lot about Argentine culture and there is something that I found interesting: I found many points of contact with the history of my country. I love that the work is and can be seen in Argentina because -although it seems like a crazy dialogue- I think they are two cultures that have faced the need to understand different points of view.

Photo: Alfredo Luna.-T .: The change in the social scene in Saudi Arabia is one of your great sources of inspiration. What do you find there?

-AA: In recent years, many Saudi citizens but also people who come from abroad to live in my country to advance. There are many positive changes for women, of course I speak from my point of view. So, as a woman, I feel that the landscape is changing a lot, that there is movement.

-T .: Your work also deals with the encounter between the past and contemporary history. What do you find at that intersection?

-AA: I think it is essential to understand where we come from in order to know where we are going. Finding and investigating the relationship between the past, the present and the future is essential. I use folklore, poetry and certain historical cultural issues that I bring to the present. Because I feel that there is always a struggle between tradition and modernity. I am interested in studying and watching that tension a lot.

-T .: While you were studying, you lived for a time in London and another in Saudi Arabia. How did that change you as an artist?

-AA: There are two voices in me constantly dialoguing. Over the years, I realize that my work is a reaction to understand change. I think that having lived in both countries affected the visual language that I use and, at the same time, being outside allowed me to have a little more perspective.