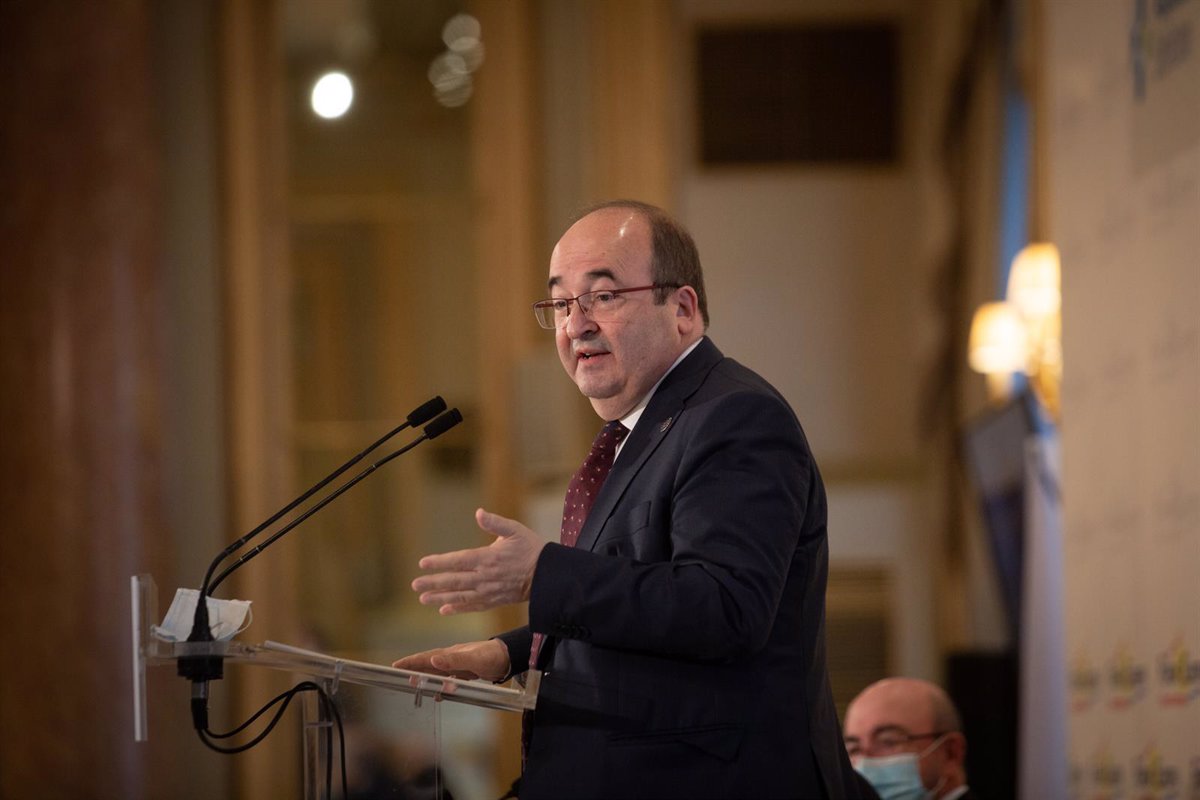 The Minister of Culture and Sports of the Government, Miquel Iceta, has opted this Monday to combine “measures of diverse scope” and not only quotas in the future audiovisual law to promote the presence of Catalan, Basque and Galician on digital platforms .

The minister considers that the best solution would be to carry out this combination of measures given “the difficulty in today’s world of making certain criteria prevail in the audiovisual world”, and has given as an example the Catalan Cinema Law, which despite establish dubbing fees of 25%, only 3% is reached.

“Sometimes it is not enough to proclaim things or to put them into law,” said the head of Culture and Sports.

In cultural matters, he plans to approve the Statute of the Artist before the end of 2022 and has defended the Barcelona cultural and scientific coca-capitality agreement, claiming that “it is still scary and there are those who want to take advantage of it to face territories.”

“The commitment of the Government, and based on the conversations that I have had with the ministers involved, throughout 2022 we will be able to approve the central elements of the Statute of the Artist,” he assured at the Europe Forum, after recalling that there is an interministerial commission working on it and that will entail the modification of dozens of reforms of specific laws.

He has also explained that they are inclined towards this normative microsurgery and not towards promoting their own law to promote that creators “can carry out their work in a stable framework, with decent remuneration and that society benefits from it.”

According to Iceta, artists do not have a permanent or stable income regime, so he considers that the same legislation that applies to economic activities of another order should not be applied to them.

After warning that culture and sports have suffered especially the consequences of the pandemic, he wants to promote a “cultural renaissance” through the pact and agreements with all sectors involved and with civil society.

Thus, it has placed among the axes of its political agenda the improvement of the regulatory framework of the artistic value chain, which entails the protection of intellectual property and the rights of artists and creators until a certain product is consumed and purchased.

He also wants to defend the concept that culture and sports “do not ask for anything and offer a lot”, and has denied that he gives away anything in this area and that he limits himself to complying with what the PGE collects, in relation to those that he They reproach having allocated 20 million euros of investment, via royal decree, to various entities for the cultural and scientific capital of Barcelona.

“The idea of ​​cocapitality, the promotion of science and culture, is still scary, and there are still those who want to take advantage of it to confront territories, society, and to make dialogue impossible,” said Iceta, who has specified that it is the City Council of Barcelona the one that decides where these 20 million are destined.

“This is federalism,” added Iceta, who has argued that benefiting Barcelona is equivalent to benefiting the rest of Spain.

While the great cultural institutions of the State are based in Madrid, Iceta explained that in Barcelona there are consortia, but the State is not the direct owner of the great museums and institutions, so “it is logical that it wants to complement with contributions the recognition of cocapitality “.

With the commitment to maintain the cocapitality game while he is a minister, he considers that it is good that Spain recognizes the role of Barcelona for the whole of the country: “I have an idea of ​​Spain in which Catalonia is a protagonist for the benefit of all”

“THE MADRID-BARCELONA TICKET IS UNBEATABLE”

For Iceta, “the Madrid-Barcelona ticket is unbeatable”, and for this reason he is in favor of cultural offers favoring synergies between both cities.

When asked if he is in favor of locating a sub-office of the Prado National Museum in Barcelona, ​​he explained that they are not in favor of it but of the possibility of transferring works temporarily, and he believes that in the Catalan capital there are buildings and facilities to be able to host them, slipping examples like the Bank of Spain, without taking it for granted.

“I like Plaza Catalunya and I like putting things in the center of the city. And that it can be reached by car, I also like it”, remarked the minister, who has called to recover Barcelona from the already ex-mayor Pasqual Maragall and from the 1992 Olympics.

Although he rules out being the mayor of the PSC in Barcelona in the elections, he considers that it is necessary to recover “the strength, prestige and attractiveness” that the city had, and he believes that this also has a lot to do with tourism, art , culture and humanism.

To explain himself, he assured to agree with what the FC Barcelona player Gerard Piqué said recently about Madrid: “I heard Piqué saying that in Madrid you can breathe the dynamism and strength that I would like for Barcelona. Piqué played it”.

He also explained that in the coming weeks they will bring the new sports law to the Council of Ministers, recalled the review they have made of the Anti-Doping Law and highlighted the role played by FC Barcelona in various fields, such as tourism and culture; in an act in which the president of the club, Joan Laporta, was present.

“Espai Barça, go ahead. Barça, go ahead. Madrid too. Madrid, go ahead, and on the pitch they decide who is the best. All of this is an engine for the country,” said Iceta, adding that he would love to see the Spanish team ever played in Barcelona, ​​and that they had a fraternal reception.