“Sometimes the further you go, the closer you get to your origin.” 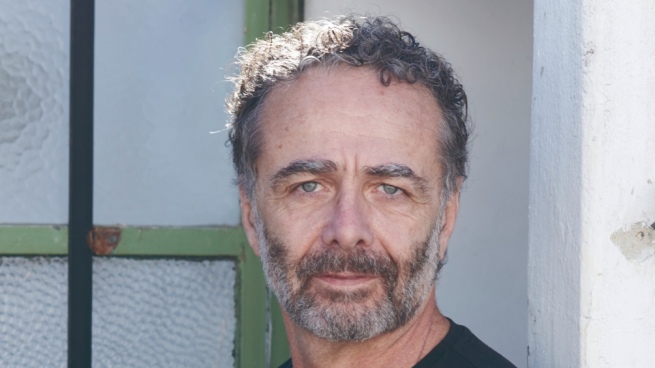 The history and landscapes of Patagonia and the claim of the original peoples who inhabited it are the axes on which the plot of “The tallest men” is structured, the most recent work of the Santa Cruz writer Fabián Martínez Siccardi, who with resources from the initiation novel but also from the historical thriller, he pays homage to Jules Verne, one of his childhood readings.

The text just published by Penguin Random House narrates the adventures of a student and later a seminarian who uses his knowledge and his travels through Europe and southern Argentina to prove that the Tehuelches, a people from whom he himself descends as he is mestizo, are a chosen nation.

“Fabián Martínez Siccardi has written a passionate and moving novel in the form of a plea for the repair of the rights of a trampled and defeated people,” says South African Nobel Prize winner John Maxwell Coetzee on the back cover.

“We must find a language as abstract as the most abstract pain and as precise as the most concrete language, a language capable of connecting similar pain, because the forces of evil that overwhelmed the indigenous continued later with the white women who were brought in as prostitutes, with the white laborers who were also exploited and then shot when they went on strike continued with abused children, with devastated forests and consumed fields ”. Manuel, the narrator, reflects in search of a mythical figure capable of endowing these tall men with meaning and significance.

Martínez Siccardi was born in Río Gallegos. In 2012 he published the youth novel “Patagonia iluminada”. In 2013 he won the Clarín Novel Prize for “Bestias outside”. He has just motorized “We are survivors”, a book that recounts the testimony of eight people who suffered abuse from the eyes of eight writers, including Gabriela Cabezón Cámara, Sergio Olguín, Claudia Piñeiro and the author himself.

The following are the main sections of the interview in which the author told Télam how many of his childhood and adolescence memories are in Manuel’s story and how he turned the story into a search for vindication of those indigenous peons, descendants of the former settlers, whom he met during his days in the south.

-Télam: Did you ever say that when you were a boy you were a fan of Jules Verne and that nowadays you are a fan of Roberto Bolaño. What does the novel by both authors have?

-Fabián Martínez Siccardi: Verne’s books were like the doors of Narnia’s closet, the passage to a world very different from mine that Verne masterfully created by projecting one image after another, choosing the right and necessary details so that my mind could visualize places where it had never been.

On the other hand, Bolaño is the style, it is the prose that sustains you in a state of grace and never lets you fall, one of the writers with the most stylistic resources that I have read in my life. I’d settle for “Tallest Men” to have at least a hint of “travel in style.”

-T .: The Church or more specifically the Salesian congregation has an important role in history, and perhaps because of your biography and your time at a school they are seen from a benevolent perspective. The missionaries are collaborators of the protagonist, they give him comfort, they help him …

-FMS: The “evangelizing” arm of the army played a nefarious role in the Argentine invasion of Patagonia, they were not only ideological accomplices but also directly responsible for the deaths, as in the case of the Selk’nam held on Dawson Island, a a kind of armed concentration camp on an island in the Strait of Magellan where they took (to die) hundreds of men, women and children.

Manuel, the protagonist of the novel, is very aware of this and looks for every possible loophole in the congregation to carry out his defense of the Tehuelches, to specify his plan to show the world that the Tehuelches are a people chosen by God. One of those loopholes are the two missionaries, Jiménez and Murch, who are further removed from the bureaucracy because they spend most of their time visiting ranches and also the Tehuelche reserves, and that is why they have developed a different sensitivity, a different empathy, and are the only ones willing to help you.

-T .: You lived in a ranch in the south, this love song to the Tehuelches arises from the memories of your childhood.

-FMS: My Asturian great-grandparents came to Patagonia in 1910 to work as rural laborers. My grandparents were also rural workers, but with a lot of effort and a bit of luck they ended up buying in the 1940s a ranch on Lake Cardiel, in an area that is not good for sheep farming and most of the years they ended up with debts . In that ranch the laborers were like family, they lived there and some worked with my grandparents for decades.

When he went to spend the summers in the ranch, he spent a lot of time with these men accompanying them in the tasks of the field and also in the moments of the mate and the talks. Many years later I discovered that most of them were indigenous, Mapuche or Tehuelche, who hid their identity out of shame, out of fear of discrimination. That had a profound effect on me, which largely served as an engine in writing the novel.

-T .: What is the role that nature has in history, refuge, shelter, source of food and also source of hope since the bison inhabits it?

-FMS: Nature is everything and we are part of that nature. Most of the original peoples of what we now call Argentina (or America) had a relationship of much more humility and respect for nature. European capitalism and utilitarianism are the ones that impose the idea that you can destroy everything and everyone. I believe that in the Mapuche, Andean, Tehuelche and many other cosmologies there is a reservoir of wisdom to which we should return to learn, or better yet “unlearn” what was installed by European colonialism.

-T.: As you did it yourself, you protagonist must travel to Europe, more specifically to Italy, to better understand the mission of his people. Does it look better from afar? Does the distance give Manuel the perspective to see his town as it is?

-Sometimes the further you go, the closer you get to your origin. That happens to Manuel and it also happened to me. I lived for many years in the US and Spain, I had a partner for many years in which our language was English, however in my writing I have been getting closer and closer to my origin, to that stay at Lake Cardiel where, somehow way, I became mestizo. Races do not exist, they are European inventions to subjugate the other. I do not have indigenous ancestry (unfortunately) and I was raised with all the privileges that whites have in this country, but I feel that having shared so many hours with these Mapuche and Tehuelche men in a formative stage of my life somehow made me mestizo. And I do not say it as an attempt at cultural appropriation, but from a deep humility and respect for its vision of the world, for its history and for its silenced tragedies.

-T .: What is the importance of language to create realities, that it must be silenced, stigmatized and penalized and Tehuelche children who speak their native language are punished?

-FMS: The European conquest brings its language and imposes them. Many languages ​​were lost along the way, but some still remain and are very much alive. The Mapudungún is one of them, the Guaraní is another and there are many more. Language is power, I believe that Argentines should study languages ​​of native peoples in schools instead of continuing to learn European languages.

-T .: At some point, the protagonist equates the persecution and extermination suffered by indigenous people with that of women brought in as prostitutes. Who is the oppressor who subdues them all?

-FMS: It is the patriarchy, the white, European, modern, Christian and supposedly heterosexual man who decides, about 500 years ago, that they are superior to everyone and everything, that others are others who must be controlled and exploited, be they women , children, indigenous people, blacks, gypsies, homosexuals, the count is infinite. Along the way they also carried away not only thousands of human beings, but also the environment. The planet is on the brink of extinction. The patriarchy is behind all that.

-T .: JM Coetzee defined the novel as a plea, did you conceive it that way?

-FMS: No, but yes as a song of love and admiration for the Tehuelche people. But going back to how Coetzee interpreted it (who was kind enough to read the entire novel in Spanish), the word “supplication” means: “To ask someone for something with humility, submission and vehemence.” Of all that, I remain with the vehemence, “The tallest men” is a passionate novel.