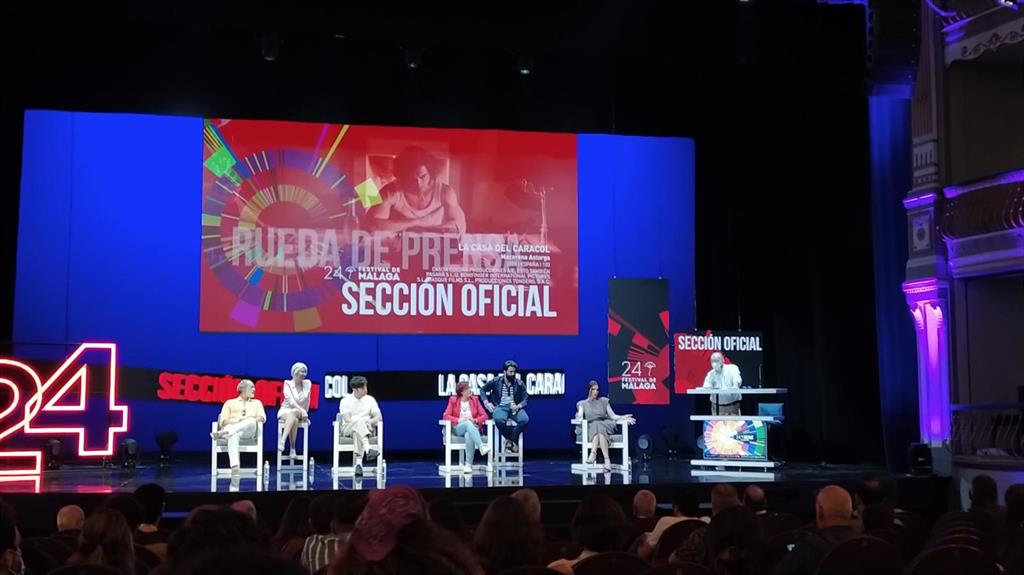 Macarena Astorga has presented her first film, ‘La casa del caracol’, on the fifth day of the Malaga Festival. The film, starring Javier Rey and Paz Vega, is a suspenseful tale that draws on varied influences ranging from Stephen King’s cinema to Steven Spielberg’s films.

The writer Antonio Prieto (Javier Rey) decides to spend the summer in a town in the Malaga mountains, where he hopes to find tranquility and inspiration for his next novel. There he meets Berta (Paz Vega), a woman for whom he feels an instant attraction, as well as some peculiar characters about whom he begins to write and investigate.

Antonio begins to discover that the locals hold numerous secrets and a disturbing hidden legend. The reality that you will live in those days will make you realize that, sometimes, reality far exceeds the myths.

The director Macarena Astorga has presented ‘La casa del caracol’ at a press conference, on the occasion of her participation in the official section of the contest. She was accompanied by the interpreters Javier Rey, Paz Vega and Cachín Alcántara; and the producers Álvaro Ariza and María Luisa Gutiérrez.

The director, who has released the film “at home” has been “happy, excited and nervous” to be at the Festival. “This is totally new for me, it is easier to face a class with 26 teenagers than all of you,” he joked referring to the press professionals who were in the act.

The director has said that she left her job as a teacher at an institute to turn to the film project of ‘La casa del caracol’, which, in addition, was the first Spanish production to be shot in times of the pandemic. “The filming caught us just when everything started, it was very difficult to start everything,” he said.

The producer Maria Luisa Gutiérrez has recognized that there were many moments of doubt due to the outbreak of the pandemic. “There was not even a filming protocol yet when we got on with it. In the end, we decided to go ahead and we can celebrate that there was no incident,” he remarked.

The producers found the malagueña after having seen her short ‘Transits’, which contains coincidences with ‘La casa del caracol’. “I wanted to take that claustrophobic and disturbing atmosphere that was seen in the short to the town of Quintamar to be one more protagonist,” explained the director.

Regarding the work with the script, the work of Sandra García Nieto, Astorga has said that she intended to be “honest” with herself and make the film her own. “I wanted to bring the story to my field. For example, the ending did not quite convince me and we changed it,” explained the Malaga.

For their part, the actors have talked about the process of building their characters and the experience of filming. Javier Rey has said that all the work prior to filming was done by video call.

“We did it with a lot of solitude at home, without being in contact until a week before we started filming.” The character of Antonio Prieto is, according to the actor, someone “complex” and with many layers that could not be escaped.

Paz Vega has also spoken of her character, that of Berta, as a woman who at first appears to be “a normality” that later falls apart.

PREMIERE IN ROOMS AND ON PLATFORMS

The film team has concluded that ‘La casa del caracol’ will be released this Friday, June 11 in theaters and will also be available on the Amazon Prime Video platform.

Regarding the international presence of the film, the producers have added that the feature film was acquired by France at the Berlinale. Finally, they have announced that in the coming weeks they will begin a new shoot directed by Astorga for a comedy entitled, ‘El Refugio’.