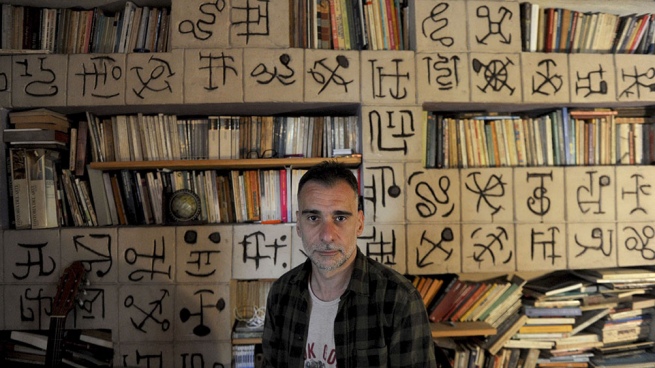 “From another planet” It is titled a selection of science fiction and fantasy that a La Plata publisher has just published in what is perhaps the first anthology of that genre, not only written during the pandemic but also hosting this situation that affected the world and that now creeps in in a way that direct or metaphorical in much of the 16 stories from the book: “Science fiction seems to speak of the future but in reality it speaks of a present,” summarizes the editor Facundo Bañez.

There are 16 stories where apocalyptic or fantastic scenarios, hecatombs, trips to other worlds and all dystopia appear related to the pandemic, because as the director of Ediciones La Comuna says – a stamp promoted by the Municipality of La Plata that was in charge of the launch- “science fiction is always a great metaphor for reality.”

“My breathing is harsh and harsh (…) Nameless gases penetrate into our lungs (…) Mom died because she couldn’t breathe”, reads the story “Metal lungs” by Almendra Arteca, while in ” The seven seasons of Plotakis “, Víctor Blanco tells:” Five weeks of isolation in the underground bunker (…) He dived convinced that it would be the last quarantine. The bat virus had been hardly a joke in comparison. Afterwards came the bacteriological offensive that crowned years of trade war between the Chinese and the Americans. “

There is also the story “The invasion”, where a plague of flies was the argument that Roxana D´Auro found to exorcise, among others, the images of children protected with masks: “I remember well that old, very old movie … ‘ child of the plastic bubble ‘was called or something like that (…) That is how the children began to walk these days, after four months of confinement (…) The landscape provided by these protobubbles has been an impact both in our community as in the whole world “, writes the author.

“From another planet” is the fifteenth title of La Comuna Ediciones in its new stage. It was founded by the writer Gabriel Bañez, a writer from La Plata who passed away in 2009 and left works such as “La cisura de Rolando”, “Virgen” and “Los Niños disappear”, the latter taken to the cinema with the leading roles of Lorenzo Quinteros and Norman Briski. His editorial seal is now in the hands of Facundo, his son, who tells Télam the details of the brand new volume of stories.

– Télam: How did the idea of ​​publishing a science fiction and fantasy anthology come about?

– Facund Bañez: At the beginning of 2020, a little before the pandemic broke out and in a scenario where the word coronavirus was not yet incorporated into our vocabulary, we launched a federal call to every writer who wanted to participate in a science fiction anthology . We had given a delivery deadline until June but due to the isolation due to the pandemic we extended it until September of last year. We received 200 works, from authors from Patagonia, Santa Fe, Entre Ríos, among others, and the material was so rich that instead of the 10 stories we were planning to select, we decided to publish 16 stories.

– T .: What happened when they observed that the pandemic issue appeared directly or indirectly?

– FB: It had not been a call for Covid-19 or anything like it, but fear, confinement, fear of disease crept into the ´type scenarios´ of science fiction; in some in a direct way in others more metaphorical, but it is and is that, as they say, here reality surpassed fiction. This reality of the pandemic is beyond science fiction.

That idea of ​​the end of things, air is not air, breathing is an almost impossible dream and what seemed like an improbable future became an everyday present. But when we launched the call we had no idea what was coming for us and for the world. And it was the first time that we were traversed by something globally. In other words, we all suffer the same, with particularities without a doubt, but we suffer the same as a citizen in Hong Kong or in Rome. That fear, that apocalyptic issue that we are experiencing was not visible at the time of the convocation but it was undoubtedly very prophetic, we were anticipatory.

– FB: Science fiction is always a great metaphor for reality. Describe an uncertain or dystopian future to talk about the present; find in the future the ideal setting to talk about the present. As unsettling or terrifying as it may be, it makes that future always a present possibility. Somehow Ray Bradbury said it when he clarified that in his texts he was not trying to describe the future but to prevent it.

There are texts like “La Invasión”, for example, where it is clear that through the sieve of the narrative complaint not only a health drama can pass but also the way in which that drama, that ecosystem of which we are part, is told and constructed ; in others the exclusion of cordial and sympathetic manners appears as in “Los Ocupas”, the totalitarian state of “Los grartos” or that society that never sleeps in “The discovery of the night”.

Beyond this, the different readings that only orbit around the social criticism that the stories contain fall asleep, I think, before the vastness proposed by the limitless lands of fiction. At the end of the day, beyond the genre and the own brands that give it its style, deep down the same thing is always sought: to tell a good story well.

– T .: La Comuna Ediciones not only published books during this pandemic but last year, in full strict quarantine, it offered its books to partly alleviate the isolation of many men and women in La Plata.

– FB: When the worst of the confinement started, we had some books that we couldn’t distribute at reading points, so we decided to put a phone number for people to call and we would take them home. We had a stock of 200 books and they were all distributed. There was a need to read, there is a need to read, people want to read.

The publishing house was created in 1998 by Gabriel Bañez, my old man and stopped working in 2009 when he died. I took it up again in April 2017 and to date we have edited 15 books: narrative, poets from the region, an anthology of chronicles and journalistic profiles, the work of the poet Horacio Castillo, among others. The idea is to spread local authors, but it is not a publisher of literature from La Plata, we do not set borders that do not exist. When running a publishing house, one must be receptive to different voices beyond genres.

– T .: What project is the publisher working on now?

– FB: Sometimes making books from the State is not easy, you have to fight the budget to make more books. We have advanced, corrected and about to go to press, “Chronicle 2”, which continues the work started with “Chronicles” published last year that summoned 18 journalists from the region.

The books are distributed by us in bookstores in La Plata and CABA, not in chains and the cover price is symbolic, since you have to set a price for it to enter the commercial circuit. Being a municipal publishing house, we do it from the budget that the La Plata Ministry of Culture has and we understand that the book has already been paid by people with their taxes.