‘A life without idealism is disappointing’ 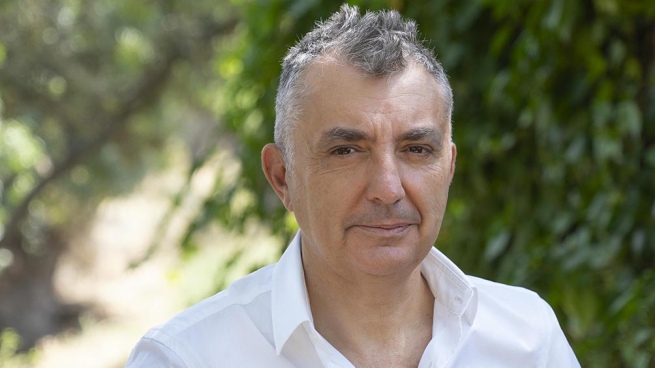 On “The kisses”, the Spanish writer Manuel Vilas ventures into the romance novel genre with a story starring a retired professor, Salvador, who during the health emergency due to the Covid-19 pandemic isolates himself in a cabin and meets a woman, in whom he will embody his greatest wishes : falling in love and living an intense, full present, in the best style of Quixotan courtly love.

“Life has not treated well those who have not experienced love at first sight. Immediate love, without a second of doubt: I was thinking of that love, of a sudden one; that should be a democratic right. A political conquest”, Salvador writes, the character in whom Vilas set the tone and delivery of this book: a manifesto about love in times where the meeting of bodies is a potential risk.

“I wanted to find a territory where I could get excited about life again. I was watching the movie ‘Casablanca’, the scene where the Nazis enter Paris, when Ingrid Bergman leans out of the balcony and tells him ‘the world is falling apart and you and I We have fallen in love. “I understood that love was a solution, a lifeline to fight the anguish of any catastrophe and that was what I wanted to do in” The Kisses, “a love story as a reminder that love is the solution. faced with a catastrophe of a collective nature, the place where one can reillusion with life or feel life again “, says Vilas in dialogue with Télam.

Manuel Vilas (Barbastro, 1962) is the author of poems such as “Resurrección” and “Roma”. His first narrative titles include “España” (2008) and “Aire Nuestro” (2009), with several others in between such as “Los inmortales”. Ten years later he added “Ordesa” (2018) and “Alegría” (2019), books with which his popularity took off in Spain and Latin America, while in the first he addressed the love of parents, in the second he concentrated his plot on the love of children. With “Los besos”, love returns but with other edges: that of a couple. “I am a professional of love”, the writer jokingly defines himself in an interview by Zoom, from Madrid.

Because love? “I am obsessed with love because it is a place where relationships are not of interest, they are not mean, there is no alienation, human beings in love are human before anything else: they are not things or consumers or citizens, they are full human beings with radiant and wonderful emotions. My obsession with love is because I see that this is the place where we feel complete “.

Idealized, utopian, the love of “Los besos” (Planet) is an illusioned love but also an experienced love, mature in the sense that its characters have more or less traced lives and trajectories (professions, families) and are willing to give themselves to background knowing that in this gesture the possibility of climbing to the depth of desire, eroticism and knowledge is at stake. In that romantic dance that Vilas builds in this story, Salvador and Montserrat dance – he 58, she 45 – knowing, ultimately, that it is love that “comes to remember that you are alive”, as the narrator writes.

-Télam: In a context of enormous complexity with the pandemic, this character being in love allows him to see the world with different eyes. How does this split between the intimate and the collective impact him?

-Manuel Vilas: He finds in love a private place to build his own life, what he wants is to live an intense life. The political panorama that he observes at the national and international level seems bleak; the public space does not offer any attraction to live an intense life. And also at that moment he is reading Don Quixote de la Mancha where he sees an imaginary life that satisfies that impulse of love passion and the construction of a literary life such as that of Don Quixote. Salvador decides that starting with the woman he has fallen in love with, he is going to create another, Altisidora. He wants to live with beauty, tenderness, love, eroticism.

Hence the idealism of the character and hence also the criticism of politics because the political space, because the world we saw in the pandemic and the one we saw later, I do not think it can excite anyone, I do not think we are facing a world that politically be able to excite us. In addition, revolutions no longer exist, there is like a world finished in politics. In any case, they are the right steps but not great transformations. Then, he decides that he is going to be excited from his heart, with what he is capable of creating. It is a novel, in that sense, individualistic: it flees from public space and takes refuge in intimacy and in private.

-T: The current times make a dent in the idea of ​​romantic love because behind that ideology many types of violence have overlapped, such as patriarchy, compulsory heterosexuality. Did you come across any of this when you wrote the novel?

-MV: Salvador has a very critical masculinity, he is aware of many of the things you have said. The territory of romanticism can be called demodé, old-fashioned, but I don’t think there has been something that has such force, something that can replace it and that is as powerful as romanticism. It is true that it may seem corny, obsolete, but we have not been able to replace that great gear of illusion, of plenitude, of eroticism. There is a void: we do not like what we inherit but we have not achieved anything that can replace it.

-T: In that sense, the novel declares that when everything seems numb, love comes to remind you that you are alive …

-MV: People keep falling in love, there is something there that puts them in contact with the mystery of life. There is an energy of a radical nature that if you don’t feel it, you are not alive. Love is proof of that. And there is another area that the novel addresses, that of intimacy. A person offers himself physically and psychically naked before another and in that act he sees himself: love is a territory of knowledge. You know who you are when you see yourself reflected in another person, hence love can also be an abyss because you end up knowing who you are through the eyes of another. That is why the trivialization of eroticism seems to me something terrible because it takes away that terrain of knowledge.

-T: The narrator says that loneliness is overcome by making love, is that really so?

-MV: Salvador is obsessed with eroticism: he talks about the oxidation of eroticism, that difficult integration that exists between sex and love; He sees that sex is a space of passion that has an expiration date and then after sex he sees that there is a very important territory, the territory of affections, of complicity, of life as a couple, of stability, but he sees that that means losing sex. But he doesn’t understand why he has to lose sex, why that territory is disintegrating. We have been thinking the same for more than 3000 years …

-MV: I saw the title clearly because it was what you couldn’t in a pandemic. And on the other hand, the novel says: if you are not, then fall in love. He goes on to say that the meaning of life is that. Salvador is an idealist, he is fascinated with the beauty of that woman and that woman is telling him her life. They both want to love. Nobody is taught to love, you have to learn it in life. They both understand that if they fall in love their life will make sense.

-T: “The healthy, the beautiful, has little fame” says the narrator at some point. When Salvador falls in love, he sees everything as enlightened, does love work like this?

-MV: The character falls in love with the woman but also with everything he sees: nature, the forest, the light, the animals, everyday life, when he goes to buy and has an epiphany when he sees the fruit. It is a novel that also seeks to celebrate the eroticism of everyday life, in the creation of an order of simple beauty, the love of that woman and lots of everyday objects that light up with that love.

-T: Why did you incorporate Don Quixote as a key reading and reference of this novel, or at least of its narrator?

– MV: Salvador sees Don Quixote as a model of life. He takes two books to confinement: the Bible and Don Quixote, he does not read the Bible and in Quixote he sees a romantic who is living intensely, his life is wonderful, he believes that he is changing the world, that he is fighting against injustice. All that utopian, idealistic and romantic arsenal seems to Salvador a model of life because it connects him with passion, with a utopia. A life without idealism is disappointing.

-T: The novel is in a pandemic, how did this dramatic experience intervene in your gaze?

-MV: I wanted to write a love story, but of course the pandemic arrived and everything turned upside down. In order for me to believe the story I wanted to tell, I had to bring the pandemic inside; for me literature, as I conceive it, is a representation of life, of what is happening to us. It was clear that the pandemic had to come out. And I am a very vital person, the pandemic affected me a lot: on the one hand the people who died, and on the other the life they told us we had to live, a life of closure. I almost took refuge in this love story to be able to fight the pandemic. Create a loving music.

-T: Was it with “Los besos” that writing functioned as a refuge or do you always think of it that way? What mobilizes you?

-MV: What moves me is the celebration of life. I write because I love life deeply. For me it is a mystery and a wonder to be here and my writing is the daughter of celebration of life, I am very much a contemplation of the prodigy of life and everything I write comes from there. It is a thirst for passion. As Kundera says, you only live once and that makes everything we live unique, that’s why you have to do it with a huge passion for it to make sense.