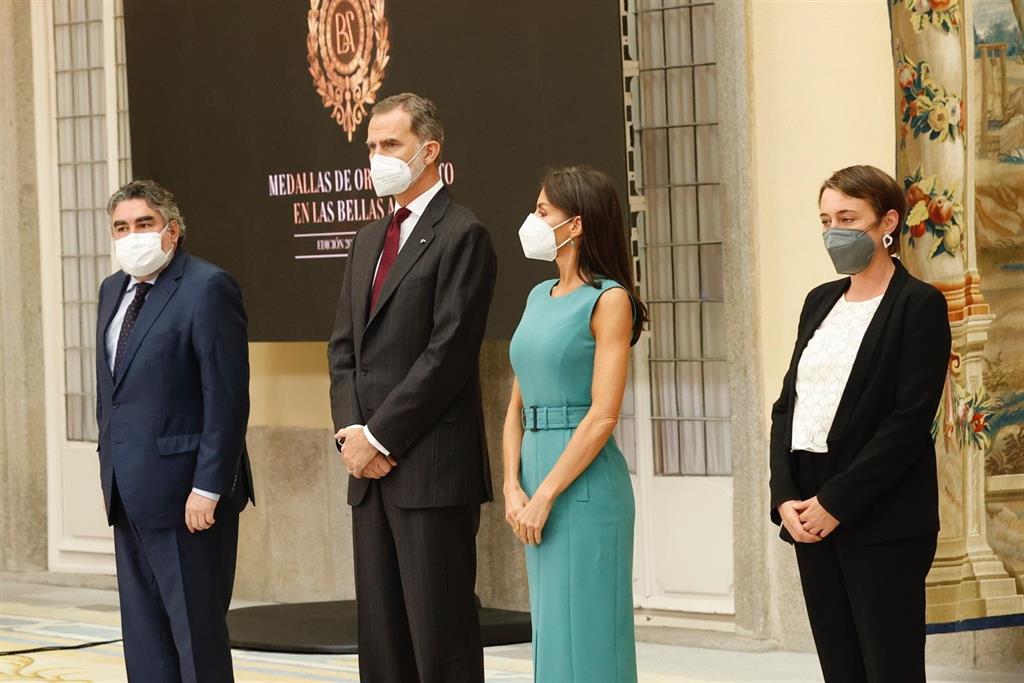 Uribes defends culture as “conducive to consensus”: “We opt for civic friendship”

The King has supported the cultural sector this Wednesday, June 23, remembering his “undoubted economic value“, pointing out the importance of” assimilating that investment in this area and the protection of creators and our cultural companies is an essential condition for sustainability. “

Felipe VI has delivered in an act at the Royal Palace of El Pardo the Gold Medals of Merit in Fine Arts 2018 and 2019. In his speech, the monarch has defended the importance of artists, with whom “a debt” is settled with this recognition.

“We cannot forget what culture supposes as a value. Her contribution to our society is as incalculable as the debt that our society owes to her“, he stressed, to also highlight that the culture” softened the harsh months of confinement. “

“The series, the movies, made loneliness more bearable; music accompanied us at all times; books opened up broader and brighter horizons for us; museums, theater and concert halls allowed us to attend exhibitions and premieres through the Internet. Even the spontaneous creation or the discovery of unknown talents had their space and impact, “said Felipe VI.

As a result of this period, for the King, society has “understood even more” that culture is needed “to be able to be and to be able to live.” What’s more, has claimed the role of “world reference” of Spanish culture for being the first to resume face.to.face activity and “for having done it safely”.

“Thanks to the promotion of the motto ‘Safe Culture’ it was possible to return to museums and theaters, to movie theaters, and it was done by protecting spectators, artists and workers. Our country became a true European cultural exception– And to the importance of our heritage we add the vitality of our creation “, he celebrated.

In this sense, he has described the artists who have received the Gold Medal in this act as a “fundamental part” of Spanish cultural heritage. “It makes us grow spiritually and materially, as people and as a country. You and your works are the best expression of the current cultural creativity of Spain “, he has pointed out, to later also highlight his work of “cultural diplomacy”.

“The overflowing creativity of Spanish culture is admired, demanded and respected throughout the world. And that contribution to the common project of all Spaniards deserves the greatest recognition, the one represented by these medals, a symbol with which the debt of our society is recognized for the incalculable value of your work.“, it is finished.

The King has listed some monuments such as the Alhambra in Granada, the Monastery of El Escorial or the Archaeological Basin of Atapuerca as examples that the history of world art “would not be the same without the extraordinary contribution of Spain.“

For his part, the Minister of Culture and Sports, Jose Manuel Rodriguez Uribes, has defended that in acts like this one opts “for the encounter, for the recognition of the other as a friend”, because he understands that culture is “conducive to consensus”.

“We opt for friendship, for civic friendship, honest and constructive communication, respectful dialogue between equals. It is the passage from mere sociability to coexistence and fraternity, from coexistence to solidarity“, has added.

Among the winners of the 2018 Gold Medals of Merit for Fine Arts who have come to collect the award have been the singer Rubén Blades; the theater director Lluís Pasqual; the photographer Carlos Pérez Siquier; the chef Ángel León; the singer Fátima Miranda or the flamenco guitarist Pepe Habichuela, among others.