‘The testimony and the bones’, a high impact performance 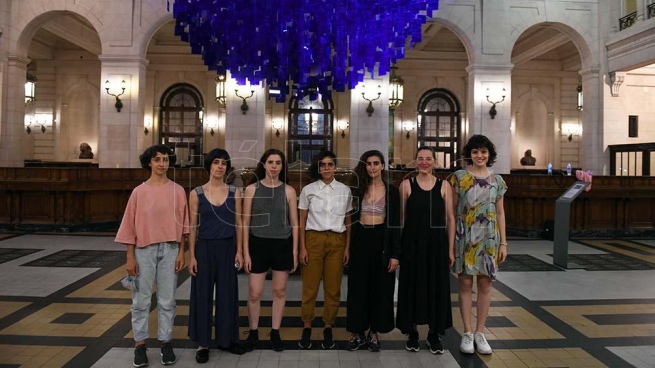 “The testimony and the bones“gives title to one of the most intimate and disturbing works of the 4th Biennial of Performance (BP.2021), by Tamara Kuselman carried out by six artists who work on their own traumas (manipulation, abuse, violence), through 15-minute actions that take place throughout the day, distributed in six rooms of the Kirchner Cultural Center (CCK), continuously, simultaneously and in front of a single spectator at a time, thus turning them into a solitary witness and depository of the disturbing question they suggest: is it only theirs that runs through them?

The trauma that is not processed, the emotions that are not metabolized remain in the body and change it, intervene in posture, gestures, physiology and it is from the body precisely, through performance, that Kuselman recovers real traumas, probably tamed, worked, so that their own protagonists narrate them from that same body, contrasting that first language of trauma with a language where the will and the own elaboration intervene.

The project presents six narratives that reflect on the ways of communicating the traumatic to the world, with a language that transcends the word, is in the memory of the body, and invites that one-person audience -which can make the whole or partial journey- to distinguish and make visible “what comes to break in and shake us,” he sums up Kuselman in dialogue with Télam.

These performances, aimed at a limited audience in that it involves six daily repetitions for four days (until next Saturday) of six different and simultaneous actions, each one performed by a single protagonist in front of an audience made up of a single person, demarcate almost private spaces for reflection that also revolve around “the vulnerability of exploring the complexities of each human being”, explains the author born in 1980 in Buenos Aires.

Belén Coluccio, Clelia Pucci, Denise Groesman, Valeria Polorena, Jazmín Ruffo, Juli Romano, each one represents with her body strong personal stories, some more metaphorical than others, each one of them chose how to carry it out. From the CCK hall, each performer guides that single viewer to where the performance acts are to be performed and that single viewer is left alone with her, in an action that generates a very private bond and regains eye contact, disturbing to hold without a screen through, without the anxious urban urgency, without outsiders to interrupt the power of that contact.

In a totally stripped room on the first floor of CCK, “a dancer moves all over the place and asks you to sit on the edge of a window without moving,” says Marina, one of the visitors who has just come out of the experience. My work was about limits, I didn’t realize until when or how far I ended up disappearing, due to the need to please “.

In the next space – the heavy furniture from the CCK’s Hall of Honor piled up on one side – the performer clarifies that you can move wherever you want. His story speaks of childhood abuse and marks a counterpoint between the beauty of the remembered images and the truculence of the events.

Much of the work of Kuselman, the daughter of therapists and the victim of a sexual attack, revolves around the sensation of falling, self-knowledge and reflects on the moment of disruption, the moment when the supposed control and certainty that the Western capitalism misleads.

He studied Fine Arts at the University of Barcelona. He has lived in Amsterdam since 2012 where he did a master’s degree at the Sandberg Institute. He exhibited in renowned spaces such as the Barcelona Museum of Contemporary Art (Macba) and the Dos de Mayo Art Center (CA2M) in Madrid, Spain.

-Télam: How does “The Testimony and the Bones” get to the Kirchner Cultural Center?

-Tamara Kuselman: The project arises as an exercise in communicating the personal to another, the intention of this construction une a une appears as a format in which a personal story can be shared, questioned, sought complicity and with the title I wanted to strip the testimony of layers and see what is the way that each one needs to communicate what happens to them, that is why each piece has its own DNA, that is: its own format, its words, its tone and its particular movement.

-T: How was the selection process of performers, in a work that involves so much exposure?

-T.K: The artists who work with me for this project have a fundamental role for this piece to exist. My call was initially to several of them that I worked with in the past, so when I thought of collaborators they immediately appeared. It is curious that the selection of people for the work had nothing to do with the content of the narratives and yet there I found myself in each of the stories, questioned, seeing myself in each of the stories at different times in my life. There is something that softens when we are there: we see ourselves in the other and that confronts and comforts us at the same time, we see ourselves less alone in our complexity. I share with them having gone through similar situations that took me / us (still takes) time to understand and process. I think the work space has given us all space to review those experiences, from choosing the event of their lives to work on. They went through the intimate and personal process of writing, reading together, rereading, editing, imagining the best way to communicate it, and finally taking it into space and presenting it.

-T: What did that work mean for you?

-T.K: After having worked with the artists, I realized that there was also something very personal of mine there, a violation that I experienced at the age of 17, and that, over the years, communicating it to other people had been built so that the other person would not know. feel bad listening to it. Then it became a heroic story where I had solved a super complex situation at the age of 17 and had survived and where I also took care of the other so that they did not get distressed. This desire to tell what happens to us is here too, without those mediating layers, the pieces present very different situations of psychological and sexual abuse, manipulations in the workplace, in the family, showing not so sharp edges on the stories, sharing the contradictions, the wounds that derive in daily behaviors, the shame, the moments where we do not recognize ourselves, the violence itself, the desire for punishment and, at the same time, empathy for the other.

-T: “Testimony and Bones” works on resonance, a concept linked to empathy with the other, to what resonates from the doing of that other in each subjectivity. What risks does this one-to-one action entail?

-TK: In the une a une something special arises, a shared moment, you become a witness, I feel that there is something that is given to you so that you keep with you, that you carry and that you remember. The personal memory that is shared, and from the experience of the other something moves me in mine. I am very interested that people can see one, two three pieces and can comment with other people who saw what others were about, also generating another level of subsequent communication in which the stories are recounted and shared with more people and viewers of the witnesses.

-T: You said that your father is a psychoanalyst and music therapist and that your mother is a bioenergetic artist. Does any of that sneak into your way of approaching your work or, at least, the latter?

-T.K: Having grown up in a context where expanded therapy happened at home was surely one of the causes for my interest in the human and its complexities. Argentina is one of the cultures most traversed by self-knowledge where we quickly open ourselves to others to tell ourselves, to ask by listening, to give returns even though we are not therapists. The construction of who we are fed / modified / constructed by those around us. I think of each experience as therapeutic in which not only verbal / intellectual communication is fundamental, but also the presence of the body, our personal bodily memories and our presence in a world of other bodies.

-T: “It is not my personal life that I tell, I tell a moment that sometimes takes me 15 years to reach, I look for words, images, I play with contexts, but it is not the truth, even when it is my life it is not my life, it is a moment, a fiction “, explained Sophie Calle precisely when she presented her performance” Cuídese mucho “, at the CCK, in 2015. How would you define what you work on in your performances?

-T.K: Art for me is a space of construction with the other, the collaborators are fundamental so that that space of communication is always open, in which we challenge ourselves and make ourselves seen in the other. Each piece is in its complexity brings a new challenge and that always leaves the workspace as that leap into the void where it is not well known what is in the background.

-T: What is the movie “The Common and Its Distances” you are working on about?

-T.K: The common and its distances is my first film, it is a documentary that we recorded in Capilla del Monte with a great team and we edited between Argentina and the Netherlands with Sofia Ungar, Lucila Barbero, Ariela Bergman, Joaquin Aras, Daniela Medina Silva, Alfredo Aracil. It is a work on the family, the collective, the mandates and the ways of life that unite and separate us. It is in the final phase of sound and color post production and I hope to share it soon.