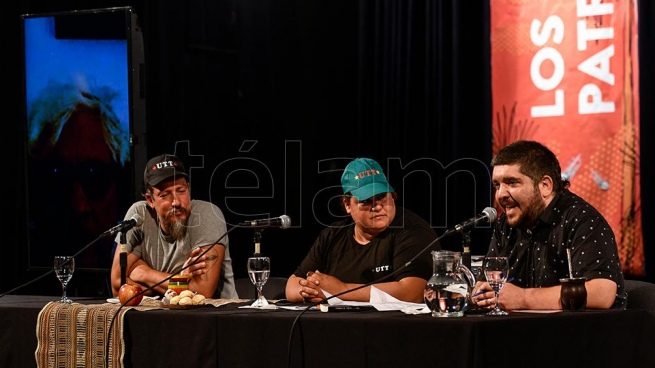 The question about the relationship between pandemic, apocalypse, capitalism and food production with the after the collapse produced by meteorites hitting the earth in Campo del Cielo, 4,000 years ago, was the topic of the table that opened the second day of the meeting “Patrimonies are political” that takes place in Chaco and that summoned the Italian philosopher Franco “Bifo” Berardi from Spain and referents of the Workers of the Earth.

With the title “The crater of capitalism. Food sovereignty and empathy in times of collapse”, Berardi discussed, virtually, with Lucas Tedesco and Déborah Jauregui from the Earth Workers organization, which was moderated by the editor and journalist Diego Skliar.

The relationship between the pandemic, the apocalypse, capitalism and food production was the trigger with which the journalist presented the issue and introduced 10 words: meteorite, eggplant (in reference to the verdurazo in Constitución in 2016 by the UTT) , threshold, verdurazo, land law, panic, frugality, techno-totalitarianism, late ecology and nihilism, to function as the fabric of the encounter.

“Berardi has been rehearsing in recent times the idea that the pandemic made it clear that we are living in the corpse of capitalism, but the problem is that we are trapped in that corpse,” Skliar introduced. And then the question is whether there is time to develop other more supportive relationship models.

Concepts such as the inevitable, the unpredictable, the irreversible, frugality, chaos, extinction, fear of the other and fascism as a response to it, autonomy, the need to return to the “useful” as the first lesson left by the pandemic collapse, were part of the threshold from which Berardi stood to shed light on this moment of the pandemic and his teachings.

With overwhelming clarity, the thinker began by referring to the economist John Keynes and his appreciation that “the inevitable almost never means (such a thing), because what happens is almost always unpredictable.”

Why think about the unpredictable, the inevitable on the horizon of our life and of the new generation?

“We have learned that there is nothing to do. We have learned in the end to avoid the empty words that politicians say, to avoid the ‘blah, blah, blah’, that we cannot do anything, that the human will cannot do anything, that politics, that art of the will, is impotent. Because the processes that capitalism, extractivism, colonialism, have set in motion in the last decades and in the last centuries, is a process that is already presented as irreversible ” he mused in response.

“Irreversible is the forest fire, warming, catastrophes that are manifesting more frequently. Irreversible is a word that cannot be said when talking about politics. Politics cannot coexist with irreversible processes,” he said.

Berardi said that the true power is not the nation states but the large global pharmaceutical and communication corporations, among others, companies whose objective is “to increase their profit”, as a policy of growth and expansion that thinks in itself. So before a humanity that was in a dramatic situation of impoverishment, “those who won are the big corporations, especially the financial ones.”

However, within the inevitable as another effect of global warming and colonialism are the great migrations of the population. They are the “great waves of migrations” that provoke “a reaction of fear, racism, violence and fascism”, something that is observed in Europe and is being seen in Latin America, he pointed out.

“For the first time the word extinction made its entrance into political speech, into the speech of everyday life. Extinction of what? Of human civilization,” Berardi pointed out about this “extreme possibility of a final apocalypse.”

But faced with this “inevitable”, he returned to Keynes’s idea: the “unpredictable prevails”, and “the differential factor is in social subjectivity”, which he characterized as “a factor that can change decisions”. Thus incorporating a possibility of exit.

For the philosopher, “unfortunately human subjectivity has undergone a process of invasion of the psychic sphere, fear of the other appears”. And he noted that in a moment of ambiguity, in which “we are passing a threshold from one dimension to another, we have to be ready to find the possibilities of small digression facts.”

Against this background, he considered that “the important thing is not the political will” but “the experimentation of new life, of autonomous life. We are learning that what we need is not growth”, and here he included the return of the principle of utility. Because returning to the useful “is the first lesson of the pandemic field”, a contradiction pointed out by Karl Marx on the usefulness of human activity and the value of the product assigned to it, he explained. And he clarified: produce not to accumulate but for what is necessary, to “satisfy specific demands”, highlighting the word frugality, as opposed to an extractivist model.

At this point, he argued that accepting the inevitable could be an exit process: “It is a meteorite that hit us in the head that was called a pandemic, virus, but there are other meteorites that are,” he pointed out, referring to frugality, to the community and the community.

Thinking about the practical life of our country was the reality posed by the UTT, overwhelming, and demystifying the productive models and that urban myth that determines that “Argentina is the breadbasket of the world” and “that we feed thousands of million people “, when 1,200 families own 40% of the arable land and only 8% of the country’s population is rural, with a predominantly urban population.

“What good is the meteorite without native peoples, without mountains, without animals, what good are they if those who lived here for thousands of years (their descendants) tell us that it is not right to dig them up because they lose energy, and we analyze during the presentations ( the other tables) unearthing it and analyzing it, as something that is given, capitalism arrived, we are not going to ask permission because science somehow occupies the place that will give us the answer after the catastrophe generated by science itself ” Tedesco said.

For more than ten years since the organization that integrates what they do is “generate resistance to the impositions of capitalism, of large companies, to tell us how we have to live, how to speak, how we have to produce.”

The first task of the UTT was to reconstruct the subject of the peasantry, because, he said critically, “if the Sociedad Rural Argentina existed, the expo-Rural and this vision that the countryside is these landowning families that produce food is not like that,” he explained. .

The UTT is made up of more than 25,000 families from 18 provinces of the country with a strong presence in the horticultural belt of La Plata, Varela, Berazategui with more than 7,000 quintera families, who “produce the fruit and vegetables that are eaten throughout Buenos Aires, where more than half of the population is concentrated, which has to do with a historical model of land concentration “.

When raising the problems of access to land, Tedesco raised the need for agrarian reform, “something that was carried out in all of Latin America except in Argentina”, from where, he indicated, that one should “think about the distribution of land based on the food strategically, “that somehow remedies the dispossession of land from native peoples during colonization, genocides, dictatorships and liberal governments that marked this imbalance.

“Argentina is the country in the world that discharges the most Glyphosate per inhabitant, 15 liters. We are continuously bombarded with poisons, putting food sovereignty at risk,” he said and stressed that it is a lie that food is produced for millions of people, since he specified “that what is generated are commodities, speculation with the dollar and it is those large companies that have us trapped in this production model that contaminates us.”

He cited as an example the small producer who has to use poison to have a good production that allows him to live, and with this he gets poisoned by eating that product.

“Organizations play a fundamental role in giving the discussion especially on food, because food is not merchandise, but a right,” he explained as part of an independent organization that creates a containing community and located the seed close to the idea. of the meteorite: “It is not colliding with the earth but is joining it.”

In the face of this collapse, danger and in the face of the apparently irreversible is the creation of autonomous survival networks like those of the UTT and many others that exist in other countries, as a new conception of life.