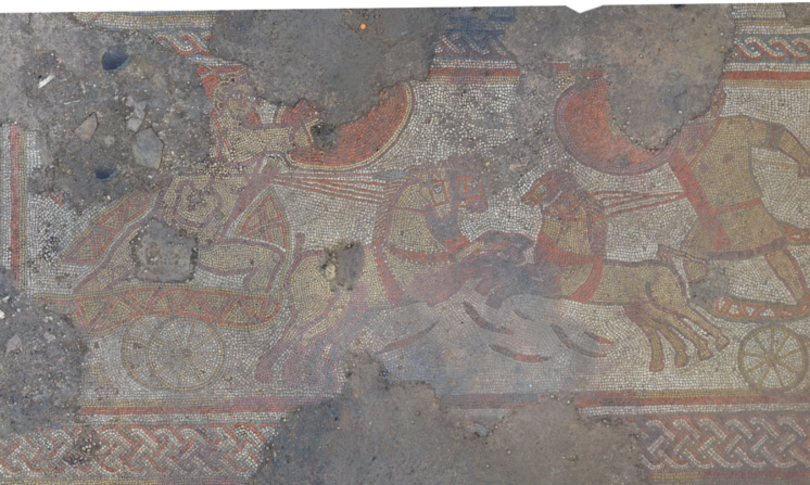 Under a piece of land belonging to a farmer from Rutland, UK, it was discovered an ancient Roman villa containing a rare mosaic depicting scenes from Homer’s Iliad.

Considered one of the most significant Roman mosaics ever found in Great Britain, the find was analyzed by archaeologists from the University of Leicester, in collaboration with the Department for Digital, Culture, Media and Sport (DCMS) and Historic England, a public body that is in charge of the management of English cultural heritage . The site was identified in 2020 by Jim Irvine, son of landowner Brian Naylor, who contacted the Leicestershire County Council team. The remains of the mosaic measure almost 11 meters by seven and depict an episode of the Greek hero Achilles described in the Iliad. Archaeological investigations have revealed that the mosaic is found within an elaborate villa complex, which includes a multitude of other structures and buildings.

Experts speculate that the place was the residence of a wealthy individual who lived during the late Roman period. The Rutland mosaic is unique in the UK, scientists point out, and depicts the battle between Achilles and Hector at the end of the Trojan War. The geophysical and archaeological evaluations also indicate that the villa is surrounded by a series of other buildings, circular structures, a possible thermal establishment, all surrounded by border moats.

They were human remains were also identified inside the rubble covering the mosaic. Researchers theorize that the bodies were buried after the owner left the site. The dating has not yet been carried out with precision, but the remains seem to be subsequent to the mosaic, so they could date back to the Early Middle Ages.

“This is definitely it the most exciting Roman mosaic found in the last century – says John Thomas, Deputy Director of the University of Leicester Archaeological Services – offers new perspectives on the attitudes of people at the time, their links with classical literature and at the same time reveals a lot of information about the commissioner of the work, who must have been a connoisseur classics and a very wealthy person to afford a piece of such workmanship “. ”

Discoveries like this – comments Duncan Wilson, managing director of Historic England – really are important to reconstruct the common history. We are eager to know what this site could teach us about the people who inhabited this structure more than 1,500 years ago ”.