A finding in Liguria: The oldest burial of a newborn girl in Europe 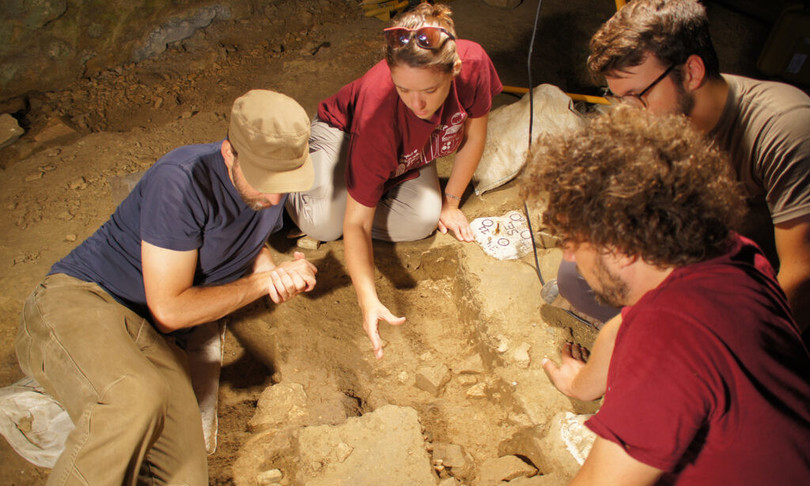 An international team of researchers digging in a Ligurian cave in the municipality of Erli, in the hinterland of Albenga, in the province of Savona discovered the oldest burial to date ever documented in Europe relating to a baby girl Mesolithic dating back to about 10,000 years ago from today.

The burial brought back, together with the remains of the small body, a kit consisting of over 60 beads in perforated shells (Columbella rustica), four pendants, always pierced, made from fragments of bivalves (Glycimeris glycimeris) and an eagle-owl claw. The discovery allows us to investigate an exceptional funerary rite of the first phase of the Mesolithic, of which few burials are known. Notably, the discovery reveals a hunter-gatherer society that also held its younger members in particular consideration. The discovery took place on the Arma Veirana website, and is now published in Scientific Reports – Nature: “An infant burial from Arma Veirana in northwestern Italy provides insights into funerary practices and female personhood in early Mesolithic Europe”.

The discovery dates back to the summer of 2017, but the excavation was only completed in July of the following year. The team is coordinated by Italian researchers, Stefano Benazzi (University of Bologna), Fabio Negrino (University of Genoa) and Marco Peresani (University of Ferrara), as well as the Universities of Montreal (Canada), Washington University (USA), University of Tübingen (Germany) and the Institute of Human Origins of Arizona State University (USA). Jamie Hodgkins, an archaeozoologist at the University of Colorado Denver, worked here with her husband Caley Orr, also a paleoanthropologist at the same university. Arma Veirana is a cavity, about forty meters long and with a curious hut shape, known for some time to the inhabitants of the Neva valley, but being far from the coast and not being easy to access, it has never been the subject of scheduled archaeological investigations.

Unfortunately, only a few clandestine excavators had understood its importance, highlighting, through two surveys, levels with lithic artefacts and fauna referable to human frequentations of the middle Paleolithic (Neanderthal man) and late Upper Paleolithic (Homo sapiens). In the remodeled land deriving from the burglary of illegal immigrants, Giuseppe Vicino, former curator of the Archaeological Museum of Finale, collected in 2006 some artifacts that he handed over to the Superintendency, thus making the site known to the scientific community. The team dedicated the first two excavation campaigns (2015 and 2016) to investigate the deposit next to the mouth of the cavity, highlighting levels that contained lithic artifacts dated to over 50,000 years ago and typical of Neanderthals. Food remains were also found, such as billed and slaughtered bones attributable to deer and wild boar, as well as residues of charred fat.

In addition, in the upper portion levels dated to the end of the Paleolithic were brought to light superior and related to gatherings-hunters of 16-15,000 years ago. The virtual histology of the newborn’s dental gems, carried out at the Elettra synchrotron light laboratory in Trieste, established her age of death, which occurred 40-50 days after birth; he also highlighted how Neve’s mother had undergone some physiological stresses, perhaps food, which interrupted the growth of the fetus’s teeth 47 and 28 days before giving birth. The analysis of carbon and nitrogen, also extracted from the dental buds, has also shown that the mother ate following a diet based on products deriving from terrestrial resources (such as hunted animals), and not marine (such as fishing. or the collection of shellfish).

In 2017, expanding the excavation activities towards the innermost part of the cavity, some pierced shells appeared; therefore began to suspect the presence of a possible burial. And so it happened. A few days later, digging very carefully and accurately, using tools for dentists and a small brush, what remained of a skull cap and the first items of equipment were brought to light. Once the body and its equipment had been extracted, the findings were then the subject of scientific analyzes carried out by experts belonging to various research bodies; these laboratory investigations thus made it possible to obtain valuable information on the burial and its chronology.

It was in fact the analysis of amelogenin, a protein present in dental buds, and of the genome that revealed that the newborn was female and that it belonged to a lineage of European women known as haplogroup U5b2b. Radiocarbon dating also made it possible to establish that the newborn, which the team then dubbed “Snow”, lived about 10,000 years ago, during the Ancient Mesolithic, in the early Holocene phase. The Mesolithic (11,000-7,500 years ago approximately from today) is a crucial phase in European history. The end of the last ice age followed and he saw the adaptation of paleolithic hunter-gatherer communities to a new environmental context, of an interglacial type, characterized by an expansion of forested areas and a rising sea level. It only ended with the arrival of the first Neolithic communities of ranchers and farmers from the Near East. There is good documentation of burials referable to the middle phase of the upper Paleolithic (Gravettian), as well as to its terminal phases (recent Epigravettian).

Burials referable to the Mesolithic are not frequent and particularly rare, for all the periods considered, those attributable to children. The discovery of Snow is therefore of exceptional importance and will help us to fill this gap, shedding light on the ancient social structure and on the funerary and ritual behavior of our ancestors. leather bundle, highlighted the particular care that had been invested in their production; moreover, several ornaments show wear that testifies that they were first worn for a long time by the members of the group and that only later were they used to adorn the baby girl’s dress. Snow therefore testifies that even the youngest females were recognized as full-fledged people in these ancient societies.