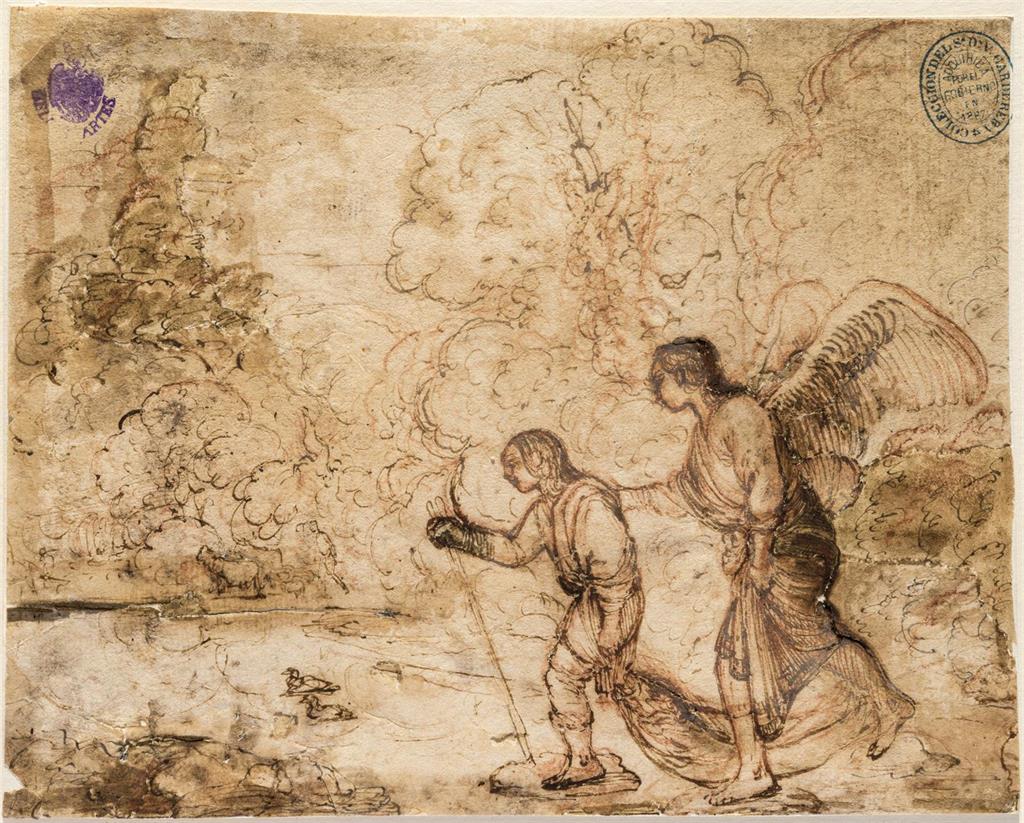 Researchers from the National Library of Spain (BNE), the Spanish University Foundation and the University of Valladolid attribute to Adam Elsheimer a drawing preserved among the BNE’s funds cataloged to date as anonymous.

This was announced this Friday by the BNE, which stressed that this could be preparatory for a painting, currently lost, of ‘Tobias and the angel’, according to a picture kept in the British Museum in London.

The cultural institution has detailed that Elsheimer made a series of representations of this scene during his stay in Rome between 1600 and 1610, and some of them were printed by his collaborator Hendrik Goudt in the well-known series ‘Little Tobías’ (1608) and ‘Big Tobías’ (1613).

As the BNE has pointed out, the drawing would be the first work attributed to Adam Elsheimer (Frankfurt, 1578-Rome, 1610) in the background of the BNE drawings, “very relevant because the graphic corpus of this German artist living in Rome is very reduced”.

“Only a dozen autograph drawings are recognized, and yet, His paintings and drawings strongly influenced his contemporaries, among whom was Rubens, as well as in the Spanish artists of the Golden Age “, has explained the National Library of Spain.

Likewise, he has pointed out that the drawing now identified is dated between 1605-1610 and represents Tobías and the angel, an iconography that the artist developed in Rome in two prints that were engraved by his compatriot Count Hendrick Goudt in 1608 and 1613 respectively.

The BNE has indicated that the evidence of the attribution and the existence of this found version resides in a stamp dated around 1685 made by the British engraver John Smith (1652-1743), which reproduces, to the smallest detail, the composition that we find in the drawing of the BNE, with the exception of being engraved in reverse. In addition, the stamp contains the inscription “ællsheimer pinx”.

“The drawing identified at the BNE clearly shares a vision of Elsheimer’s work as a whole. The gestures, movements and poses of the figures, the relationships between them and the use of the stage to evoke the mood, reflect a set of characteristics that are repeated throughout his work, “he said.

Researchers have determined that the drawing was made by Elsheimer and not by any of the artists who worked alongside him, such as Hendrick Goudt, with whose works have sometimes been confused by the use of the thick line with which the figures in his sketches were finished off.

However, it is a drawing that is characterized by spontaneity, and in which the treatment of the clothes is fluid. This lack of detail is not attributed to Goudt, who was more conscientious in his sketches. The importance of the identified drawing also lies in the fact that it is possibly a preparatory drawing for a small-format painting, now disappeared, which was also printed around 1685 by John Smith.

In the BNE drawing, Tobías appears dragging the fish with his left hand, unlike other Elsheimer compositions, such as ‘Little Tobías’, today in Frankfurt, or the versions printed by Goudt of the work of Elsheimer after his death in 1610 (Great Tobias, 1613), in which Tobias carries the fish under his arm.

The finding is part of the Collaboration Agreement between the BNE and the Spanish University Foundation in order to study and identify the drawings of the Madrid school from the second half of the seventeenth century of the Department of Fine Arts and Cartography of the BNE. The study by researchers Isabel Clara García-Toraño Martínez, Ángel Rodríguez Rebollo and Álvaro Pascual Chenel has been published in the prestigious magazine The Burlington Magazine (June 2021 issue).