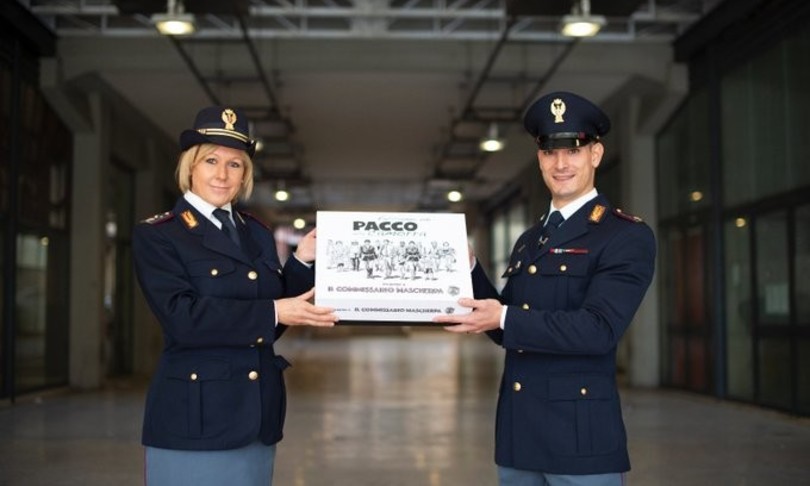 – Christmas is an opportunity to meet again with relatives and friends but also to take care of others, and why not, also for make a “package” to the mafia, perhaps with the help of the “Commissioner Mascherpa” and there his graphic novel.

The State Police is supporting the initiative again this year “Let’s make a package to the Camorra” through the comic that publishes every month in episodes on its official magazine Poliziamoderna which then takes care of the collection in a volume with an annual issue.

The investigation for 2021 by the famous policeman is entitled “Onorata Sanità” and also this time the volume is present inside the packages of food products coming from the lands and companies confiscated from the mafia, the famous ‘pack to the Camorra’.

“Last year, we decided to support the ‘package’ project with our graphic novel but also our initiative of the ‘Marco Valerio’ plan reserved for the minor children of policemen suffering from chronic diseases – explains to Annalisa Buccheri, director of Poliziamoderna magazine – and given the success, we did an encore in 2021. As State Police we take care of the comic strip of Commissioner Mascherpa whose episodes we publish in the newspaper. At the end we create a book, with additional tables and introductions by famous people as happened in the past with Nicola Gratteri. In the text there is a special enrichment, that is, the work done by the winning schoolchildren of the competition ‘We demand legality’ to which we give the first four episodes of the comic and which we invite to complete with investigations, strategies and a final ending decided by the boys. Basically, the book that we insert in the package with all the products obtained from the confiscated goods, contains the official version of the investigation by Commissioner Mascherpa curated by Poliziamoderna which this time focuses on an intertwining between ‘Ndrangheta and health care, and the one made by the boys who they won the competition, which this year are those of the Istituto comprehensive D’Adda in Varallo, in the province of Vercelli ”.

The idea of ​​making the investigation continue to young people who obviously do not know the ending of the story but have to invent it, “was born precisely with the aim of bringing young people closer to the work of the State Police and to the fight against the mafia phenomenon also through the web that the boys attend assiduously. In this way, we try to bring an anti-mafia culture to young people, especially them ”, explains Buccheri.

“Honored health”, was presented in autumn at the Lucca Comics Festival and bears the preface by the Chief of Police Lamberto Giannini and the journalist Riccardo Iacona. The script of the graphic novel is always by Luca Scornaienchi, screenwriter in charge of the Cosenza Comics Museum and the drawings are by Daniele Bigliardo, historical pencil of Dylan Dog.