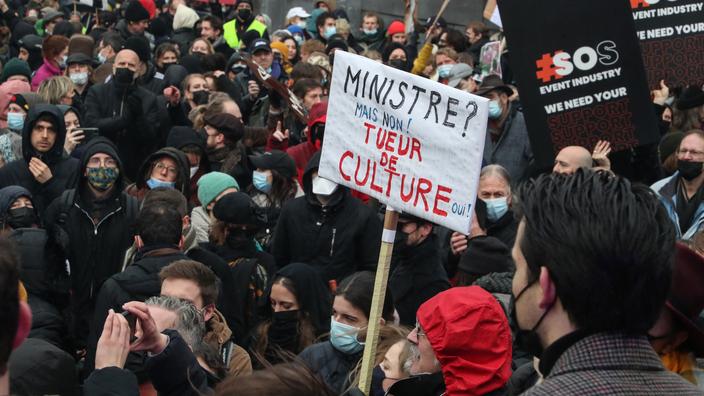 The complainants consider themselves discriminated against by the state and its anti-pandemic measures. The sector’s shortfall would be around 40 million euros.

The world of Belgian culture wins a battle: justice decided on Tuesday to suspend the closure of theaters that had been ordered by the government last week to fight against the covid epidemic. The authorities have not demonstrated “How theaters in the cultural sector are particularly dangerous places for the health and life of people as they promote the spread of the coronavirus, to the point that it is necessary to order their closure”, estimated the Council of State, the highest Belgian administrative court. The Society of Dramatic Authors and Composers (SACD), the Union of Francophone Film Producers and several film production companies filed on Monday, in Brussels, a summons to appear against Annelies Verlinden, the Belgian Minister for the Interior.

According to the quote filed at the Brussels Court of First Instance, consulted by the Belgian daily The evening , the royal decree whose annulment the plaintiffs are calling for would be both “Discriminatory and disproportionate in relation to the public health objectives it aims to preserve”. In addition, the application of the new health measures relating to the outright closure of cinemas, theaters, concert halls and other performance venues would, again according to the complainants, be subject to a “Violation of the subjective right to exercise without discriminatory or disproportionate constraints (of) professional activities on the basis of their fundamental right to culture”.

According to the complainants’ estimate, the shortfall in the cultural sector under the new health measures would be nearly 40 million euros. Faced with this financial loss, they are therefore claiming fines of 100,000 euros per violation of their professional activity. The legal action against Belgian cultural players is based in particular on a study by the Hermann-Rietschel Institute. Carried out in February 2021, it concluded that the risk of infection was significantly lower in a performance hall that strictly respects the rules of distancing and barrier gestures than in places of life, work or even large area.

On Sunday, several thousand people demonstrated in Brussels to demand the annulment of the royal decree imposing the closure of theaters and cinemas in the kingdom. In effect since December 26, the closure of these places of culture – with the exception of Belgian museums – will be effective until January 28. The announcement of these new measures follows, in Belgium as in the rest of Europe, the rapid spread of the Omicron variant of the SARS-CoV-2 virus. In France, the new wave of Covid-19 has notably had the effect of strengthening teleworking, announced on Monday by the government, as well as the upcoming evolution of the health pass towards a vaccination pass.