Courtney Kardashian was photographed with a giant toad 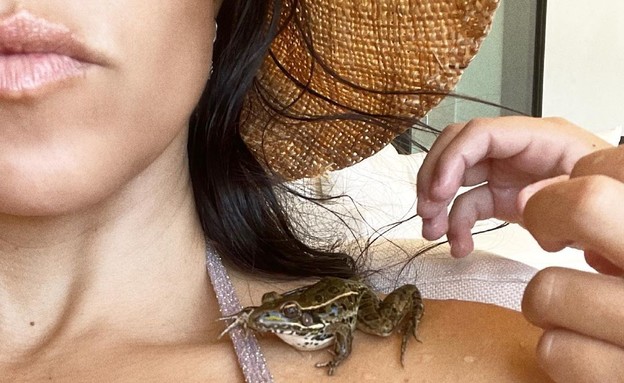 Okay, it’s time to talk seriously about Courtney Kardashian. The 42.year.old devastating star launched last February the most exciting new relationship of her life, with tattoo.laden drummer Travis Barker. Since then many of the fans point to a change in Courtney’s behavior, starting with the clothes she wears and coming to the thirsty posts she puts up and the general upheaval in her character, which has become, if we may, tougher than ever. After only yesterday we told you about the star’s hallucinatory post, in which she revealed a nipple with fangs from the diamonds, now Kurt again manages to confuse us, this time – with a toad.

Courtney shared a series of photos from the heat wave that befell Los Angeles. The star was photographed in a swimsuit by the pool, with pampering cocktails and a variety of cold foods, and between the summer photos she sneaked a picture of Kurt with a giant toad on her collarbone with the hands of a child next door, apparently of one of her young children.

Courtney’s post managed to garner millions of likes and hundreds of thousands of comments, many of them appalled by the chase that rested patiently on Kurt’s body. Will the toad become a prince? We really hope so.