In Paris, the Obelisk takes on color 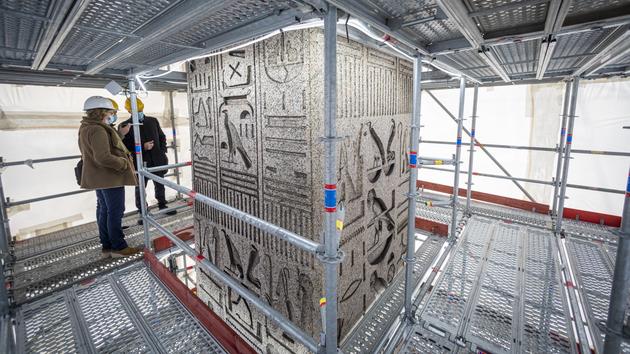 The oldest monument in Paris is the subject of a restoration campaign. This six-month project coincides with the bicentenary of the deciphering of hieroglyphics by Champollion, which helped bring it from Egypt in 1836.

With his nose glued to the wall of the obelisk, and perched 20 meters above the Place de la Concorde, Vincent Rondot reads a cartouche of hieroglyphics that he knows by heart – unlike the small troop around him. “Here we see Ramses II kneeling offering two vases of wine to the god Amon-Re, explains the director of the Egyptian Antiquities Department of the Louvre, and the god said to him: “I give you perfect health. I give you perfect life, stability and happiness. ””

After having taken narrow scaffolding stairs, he deciphers other inscriptions and other cartridges, shows the fantastic animals. From bottom to top, more than forty inscriptions celebrating Ramses II decorate the obelisk, a detail that had not escaped Jean-François Champollion, to whom we owe the precise choice of the monument. There is the one depicting a cobra, the pharaoh with a scepter, rays, birds