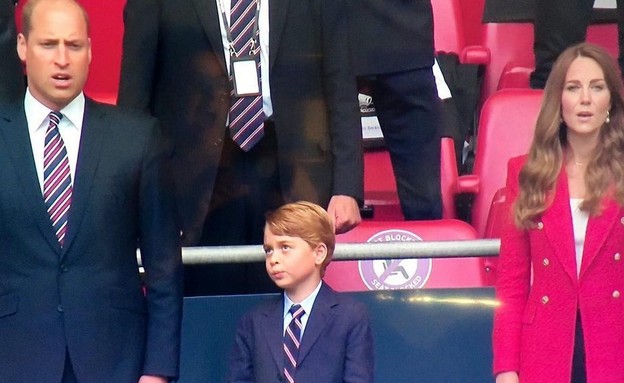 In April 2011 Prince William and Kate Middleton were married in a highly publicized and documented event. Since then we have accompanied them over the years, as they are deeply rooted in the family title of the British Kingdom, and now, when they went out with their eldest son to watch the Euro game – the son no doubt stole the show.

William and Kate watched last night’s Anglo-German game at Wembley Stadium, joined by Prince George (7), their eldest son. Prince William took an active part in the game, cheering enthusiastically and jumping happily when England won, but the whole network is only talking about his sweet young son, who showed great interest in the game and got all the focus thanks to the royal outfit he wore.

Absolutely love how Prince George, who is literally related to the woman the song is about, couldn’t care less to sing the national anthem lmao #ENGGER pic.twitter.com/Lfm13dnrx7

The young prince came into the game in a meticulous suit and tie, which were quite identical to his father’s suit and tie. The two watched the entire game, sang the national anthem and were thrilled with the victory, and since then the net is filled only with pictures of little George in the football game. We, too, are melting.

Absolutely love this photo of Prince William and Prince George

Prince George and The Duchess of Cambridge: Good goal team