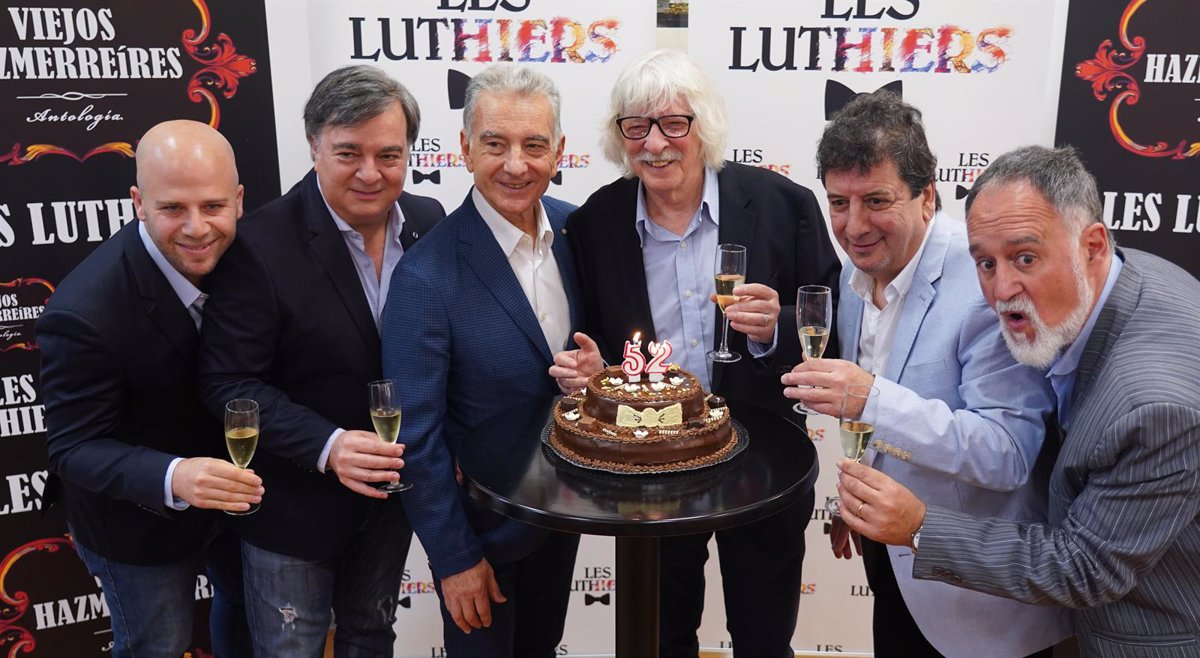 Les Luthiers will return to Spain at the end of this month of January to start a tour with their show ‘Old Laughing Stock’ with their “family, white and not at all macho” humor defended by its members, recalling that they have always tried to “criticize dishonesty, lies and corruption. The comedy group will stop in Murcia on March 18 and 19 at the Víctor Villegas Auditorium.

“There are little jokes that we have withdrawn out of prudence,” one of the founders of the comedy group, Jorge Maronna, recalled in an interview with Europa Press, pointing, for example, to the ‘gag’ of a serenade by a violent suitor trying to show his love “for his way.” “They told us that it sounded like an apology when in fact it wanted to be a humorous criticism, so we withdrew it,” he explained.

“But they are trifles, because Les Luthiers always made a family and white humor and it is not a macho group. Although we never try to change the world, we have always tried to criticize dishonesty, lies and corruption”, added Maronna, something with which is also agreed by another of the group’s components, Tomás Mayer-Wolf.

“There are numbers that we present that were written decades ago and were made in many countries practically without changing the text, it doesn’t matter if they were from 20 years ago or now. In ‘Chist’ we talked about corrupt politicians who asked a musician to change an anthem : It was written in the 90s and now it has the same result,” said Mayer-Wolf.

In any case, Maronna acknowledges that the important thing is that what Les Luthiers sees in theaters is “people really enjoying this humour”. “As for what is happening around me, I must admit with shame that I am quite uninformed, I do not watch television or theaters and I still need to find out what is happening with humor,” added the musician, recalling that they are ‘gags ‘ “not about newspaper covers, but about character stereotypes”.

‘Old laughing stock’ will begin in Spain on January 29 in Burgos and will end on March 26 in Palma de Mallorca. The places that Les Luthiers will visit on this tour are, in addition to those mentioned, Miranda de Ebro, Madrid, Alicante, Malaga, Granada, El Ejido, Cádiz, Valladolid, Pamplona, ​​Bilbao, Vitoria, Logroño, Murcia and Albacete.

It is the recovery of a tour that they were forced to postpone in March 2020 due to the coronavirus pandemic. “We had a very bad time, like so many people from the show, and we had to stop in two years,” Maronna recalled, also pointing out that in that period of time they could only be seen on Thursday afternoons in a zoom — until rehearsals were recovered one month ago–.

This tour, which began without one of the legendary members of the band, Marcos Mundstock, due to illness, will be the first time that the popular comedian is no longer there. “Everything has been very sad and very hard, it was very painful and he misses it, obviously,” the founder of Les Luthiers acknowledged.

Maronna describes the show she has as a “collection of anthologies” that includes a very diverse variety of genres, from rap to bossa nova, passing through cumbia. In addition, there is only one new piece, which is ‘Receta postera’. Asked about whether reggaeton or trap are genres that could have a place in their repertoire, they have been affirmative.

“Les Luthiers have never closed their doors to any musical genre and there may be reggaeton in the future: part of this group is adapting,” said Mayer-Wolf. “We use known genres because it’s good for people to recognize what’s playing,” added Maronna, who bets on another 50 years of Les Luthiers with humor. “I don’t know if I…but Les Luthiers never knew how long it was going to last: we’ve always thought of continuing with this, which is what we like, and hopefully it will last a long time,” he concluded.