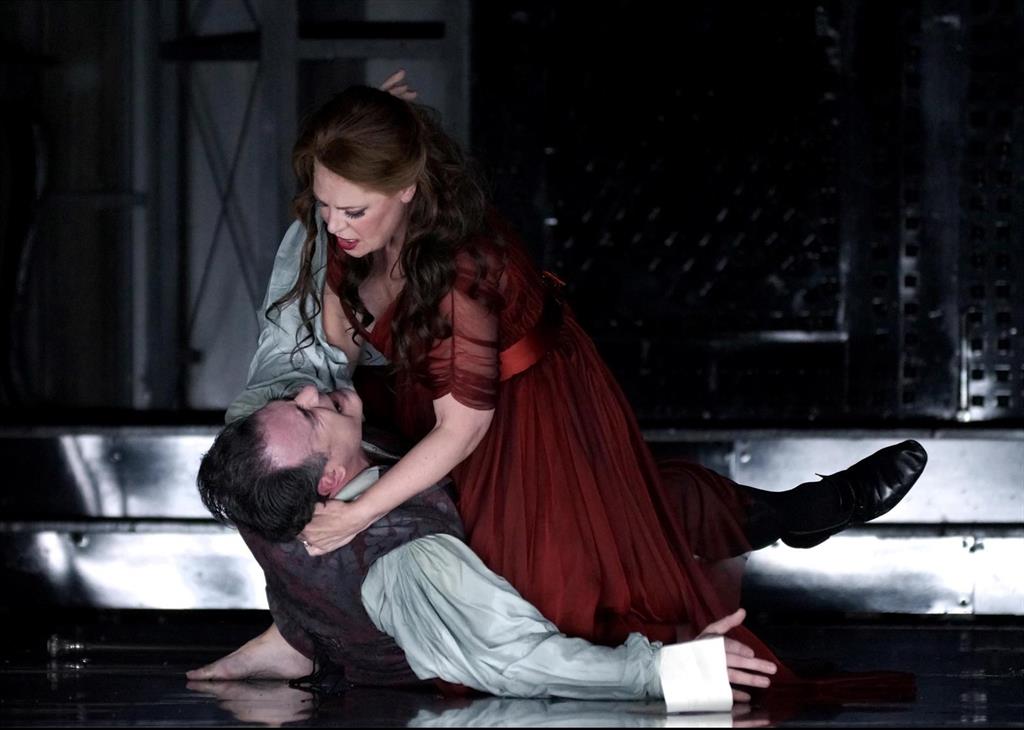 ‘Tosca’ has kicked off the closing of this complicated season at the Teatro Real with a premiere that has put the audience on their feet, thanks to the ‘tour de force’ that he raises against the unique thought that Giacomo Puccini devised at the end of the XIX and also to the interpretation of the soprano Sondra Radvanovsky, rewarded with an ‘encore’-

Inspired by Napoleon’s victorious battle against Austria, the staging of the play, the responsibility of Paco Azorín, has not left a breath for those attending the end of the party at the Madrid Coliseum- It had already been warned that it was a kind of movie ‘thriller’ and, as such, there has hardly been any respite between one ‘scene’ and another-

With a film cast – Radvanosvky in the role of Tosca, Joseph Callea as Caravadossi and, again, Carlos Álvarez as Scarpia, as well as other stars such as Anna Nebretko or Jonas Kaufmann who will appear on different days – the singers have paraded on stage accompanied by powerful audiovisuals and a word that warned of the intentions: ‘rivoluzione’-

Luisotti has put the tuned scores for the famous arias of ‘Vissi d’arte’ and ‘E lucevan le stelle’, but before the apotheosis of Radvanovsky, the first act has been marked by the ‘Te Deum’, with Caravadossi in the stage of the church and that sound of the bells that, as Luisotti himself explained, already in the 20th century became a metaphor for the anti-fascist resistance-

Then came the historic performance of Radvanovsky, who has become the second woman to offer an encore at the Teatro Real since it reopened in 1997, thanks to the aria ‘Vissi d’arte’-

Precisely, the first woman to get that encore was the Hispanic American soprano Lisette Oropesa almost a year ago – on July 29 – with Verdi’s ‘La Traviata’, which marked the return of the Madrid Coliseum after the closure forced by the pandemic of coronavirus-

Now, this recognition has been produced in the second act of Puccini’s work with the famous aria ‘Vissi d’arte’, in which Tosca collapses before the torture suffered by his lover and the fate that awaits them both-

At the conclusion of his singing, Radvanosvsky received immediate recognition from the audience, with some people standing, and applause that lasted several minutes-

Behind them, the soprano, visibly moved, returned to the starting position of the scene and repeated the aria, receiving a long applause at the end-

‘Tosca’ puts the end to the season of the Teatro Real and in this premiere it has had the presence among the public of the Spanish tenor Plácido Domingo, with his wife, his son Álvaro and his grandchildren, as well as Christine Lagarde, president of the European Central Bank, among others-

In the previous one, this work was defined as the perfect opera by the cast and that is how much of the Madrid audience seems to have understood it, with numerous applause between acts and arias- Especially with Calleja’s ‘E lucevan le stelle’, that metaphor that can be understood as the culmination of the ‘carpe diem’ that Puccini claimed so much-

And here, in ‘Tosca’, that ‘seize the moment’ is aimed especially at what it means to be an artist – “a reverential cult of the actor”, in the words of the artistic director of the Real, Joan Matabosch – and a vindication of freedom in these days when that word has been on the street for so long-

On the contrary, it is once again the tenor Carlos Álvarez who must carry the ‘dark’ weight of the work –as is the case with ‘Viva la mamma’, with which he has hooked this work at the Real–, although as he recognized, “doing bad can be a pleasure” because it falls within that free space of the artist-

Álvarez takes advantage of and squeezes Scarpia with his defects, which are many – and, based on them, Puccini builds a piece that brims with anticlericalism due to the servile, hypocritical and cowardly attitude of this “reptile” – but also, as every good deed, with its virtues: he is a villain who shows his human side by stating that he would give his life in order to spend a night with Tosca-

In short, this ‘Tosca’ by Azorín is the summary of 24 frantic hours in the lives of several characters that proposes a journey from realism to symbolism to end up criticizing capitalism and the current way of life, where there is a unique and globalized thought that it has put an end to dissension- “Do you remember when we could argue?” Azorín asked ironically a few weeks ago-